(Inspired by the dedicated biologists of the U.S. Fish and Wildlife Service and the Don Edwards San Francisco Bay National Wildlife Refuge, who protect endangered wildlife and preserve and restore their natural habitat.  We owe them a great debt of gratitude for their tireless efforts.)

It was all Uncle’s fault. And if we ever got back home again, Mom was going to kill me.

Uncle had said, “Let’s take a hike.” He liked to go exploring. I thought we should tell Mom where we were going first, but Uncle couldn’t be bothered.

Mom always said we were lucky to live in the marshlands around the San Francisco Bay. The clumps of pickleweed spread out like fields as far as the eye could see – at least it looks that way when you’re down low.

Uncle and I stepped along the branches of the pickleweed, sampling new shoots along the way. I never get over the wonderful salty taste, especially when I can find the freshest buds, the ones that are slightly pink and haven’t turned dark green yet. Maybe that’s why Uncle calls me “Pickles,” even though my name is Longtail, named after Grampa Longtail on my Mom’s side.

Although the tide was low, from time to time we reached down and took drinks of the Bay’s salt water as well.

Uncle noticed boxes nestled in the branches of the pickleweed. The sun reflecting off the silver metal caught his attention. I think they were about ten mouse-lengths apart, counting the tails. Ten salt marsh harvest mice, like us, or house mice, which showed up in our neck of the woods – I mean, marshes – from time to time.

I’d never seen one of those metal boxes before. I didn’t know what they were for. I’m not sure my uncle did, either. He was interested in the food: something called peanut butter, bird seed, sunflower seeds, and other delicacies.

Uncle balanced on a stem of pickleweed and studied one of the boxes. I stayed far away. Uncle said I was a fraidy mouse. He said there was no problem looking in. I crept nearer, slowly. We both gathered around the opening, peering in. At the far end was a big wad of something white, and we could smell the irresistible aroma of something placed there.

“We’ll just go in, have a taste, and then leave,” Uncle said.

I puckered my whiskers forward. I didn’t like this. What would Mom say?

We walked quietly along the metal bottom of the box. I let Uncle go ahead of me. Yes, I admit it, I was a fraidy mouse. But Uncle was wise and experienced. Surely he knew what he was doing.

We crept forward deeper into the box, and then it happened!

A door closed behind us, and we were trapped.

“Uncle,” I said. I could barely get the words out.

“Stop your squeaking,” Uncle said. I couldn’t see his face, but his voice seemed to shake.

Uncle didn’t speak. For a moment he lost interest in the food placed in the far corner. He turned around and inspected the door that had closed behind us. He pushed it and tickled it with his whiskers and slapped it with his tail. He bumped his head against the ceiling, rolled on his back and shoved the door with his hind paws. He scratched at the metal with his rear claws. Nothing gave. There we were. Stuck.

We proceeded to the far end of the metal box and tasted the mixture. Delicious. I confess that for a moment I forgot our predicament. That food was good. Uncle divided the treasure and gave me half. He said us little ones needed to eat lots to grow big. I wondered if I would live that long.

Then Uncle pulled on the ball of white next to the food. It was soft.

“We might as well get comfortable,” he said. He spread out the soft stuff on the metal floor. No one can build a nest like a salt marsh harvest mouse.

We climbed on the fluffy white stuff and settled in for a nap. I curled up against Uncle, and he wrapped his tail around me. His warm fur was comforting; his steady breathing helped me calm down. I looked towards the far end of the box. There were white lines where the sides of the box met the door that had closed us in. That was sunlight peeking around the edges. Later, as night fell, the metal floor became cold. We were glad we had the soft stuff to lie on to keep us warm.

I didn’t think I would be able to sleep. I kept thinking about Mom. She had to be worrying about us by now. I wondered if she was saying bad things about Uncle and his judgment and why she should never have let him take me out on a walk. I missed my Mom but no point in crying — I was tired of being called a fraidy mouse. Somehow I fell asleep, anyway.

Then there was a shaking and loud voices. Uncle was running up and down the length of the box. It seemed like an earthquake. The box was moving, tipping. We were running, sliding. I could hardly breath. What was happening?

“We caught one,” a voice said.

The box was shaking, turning, tipping. Uncle and I kept sliding into each other. The soft white stuff kept us from getting hurt as we fell against the back end of the box.

I hung onto Uncle’s tail and then grabbed the fur on his back. I held on tight. I thought it seemed like Uncle was shaking, but I’m not sure. I know I was.

The voices outside continued. There was sloshing, as though people were walking through the marsh, stepping through the pickleweed, squishing in the mud.

About the time we got used to sliding back and forth in the box, the moving stopped. There was more talking, and then the door opened. Light came flooding in. I held onto Uncle’s fur and blinked, unable at first to see.

“We got two,” a voice said. “An adult and a juvie. And they’re salt marsh harvest mice, not house mice.”

Large hands reached into the box. Uncle and I backed away, trying to hide in the white stuff. Two fingers grabbed me by the scruff of the neck. Two more fingers grabbed Uncle. We were pulled out, the white soft stuff tangled around us.

Each of us was held up by one of the people. We hung there in the air, dangling. It didn’t hurt, because being held by the scruff of the neck never does. But there we were, swinging helplessly, far above the ground. My back paws clawed at the air. I tried to get some balance with my tail. I don’t remember what Uncle was doing.

I could see all around. I saw several people, the fields of pickleweed, and many boxes filled with mice.

They set me on a flat piece of wood and put the wood on one person’s knee, always holding me by my scruff. It felt good to have my feet on something stable.

“Let’s measure him,” a voice said.  I grabbed onto the edge of the ruler.  Someone pulled on my tail until I laid flat against the wood.  Someone else was using a stick and scratching on something.

Then they dropped me into a cup, holding me upside down by my tail so that I couldn’t run.

“Let’s see how much he weighs,” the voice said.

Another person was doing the same thing to Uncle. He had been turned on his back and placed in a cupped hand. Someone pulled his tail out straight and inspected his belly.

While I still had the grey fur of a young mouse, Uncle had the golden-bronze fur of an adult with the cinnamon-colored belly. I wondered if his fur would turn white before all this was over, but it never did.

Someone took out something sharp and snipped off some of the fur near my ear. Another one did the same to Uncle.

The voices said, “If we catch these mice again tomorrow, this is how we’ll know we’ve already counted them.”

Thinking back, I have to say these people never hurt us. Although they held us securely so that we couldn’t get away, they were gentle in their handling.

They completed the indignities in a couple of minutes and then dropped us back into the metal box. They closed the door.

“Uncle,” I said. Uncle was breathing too hard to speak. “Uncle.”

We slid into the soft white stuff at the end of the box and gave up trying to steady ourselves. The box rocked and tipped and moved. We waited. Would I see Mom again?

The box came to rest and no longer rocked and tipped. Uncle and I waited. The door opened.

Faster than a hawk can dive, Uncle dashed through the opening. I never left his side. That was the fastest I ever ran in my life. Once we were far away from the boxes and all those people, hidden deep in a clump of pickleweed, we stopped. We seemed to be very close to where we had started our hike.

I thought about what a story we would have to tell, once we got back home. That is, if Mom didn’t kill us first.

“Pickles,” Uncle said. He raised his paw and smoothed down the fur on my forehead. “You were very brave.”

“Thank you, Uncle,” I said. I felt very warm inside. I broke off a few shoots of fresh, pink pickleweed to chew on our way home. 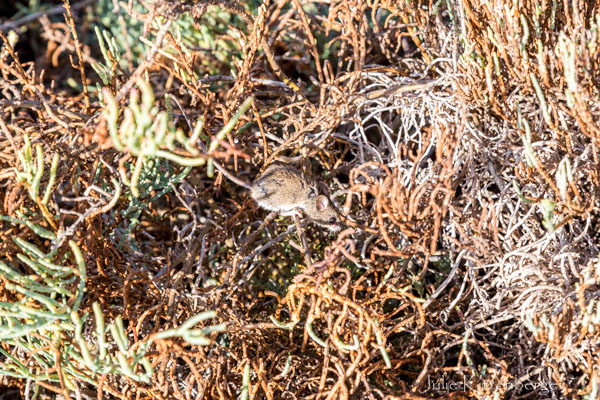 I love exploring in the pickleweed. 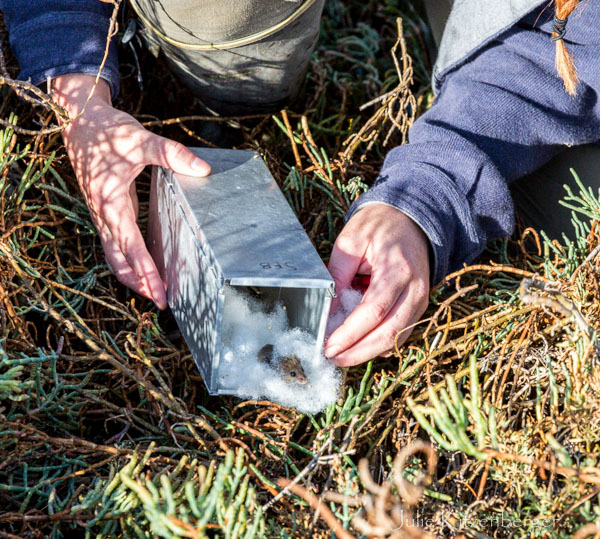 I was pulled out, the white stuff tangled around me. 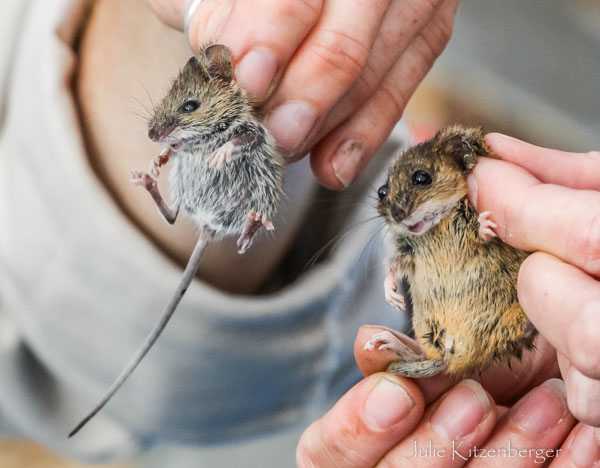 I’m on the left.  Uncle is on the right.  We hung there in the air, dangling. 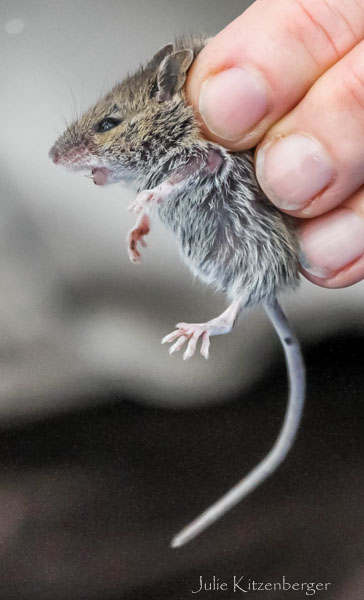 Being held by the scruff of the neck never hurts. 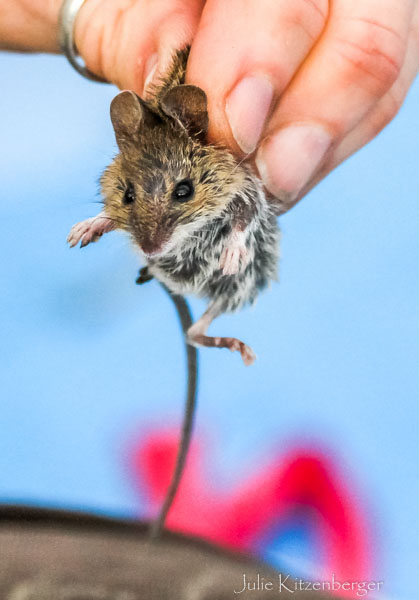 My back paws clawed at the air. 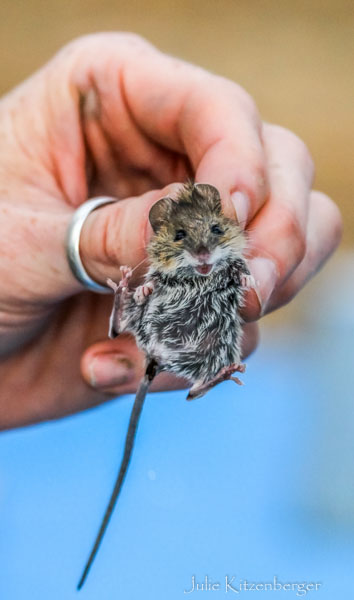 I tried to get some balance with my tail. 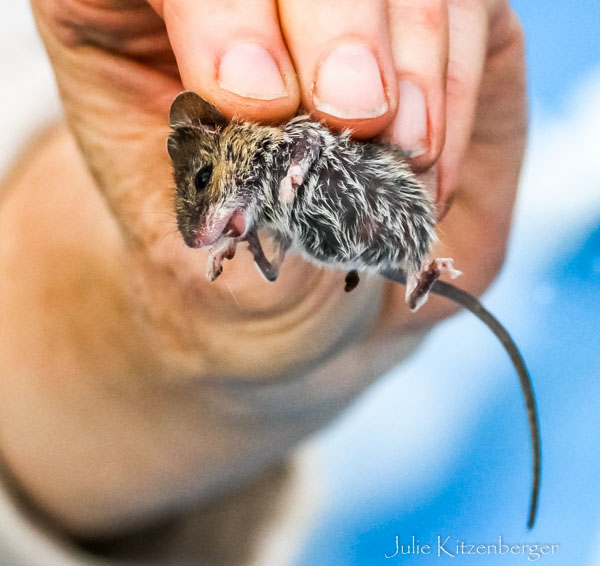 I could see all around. 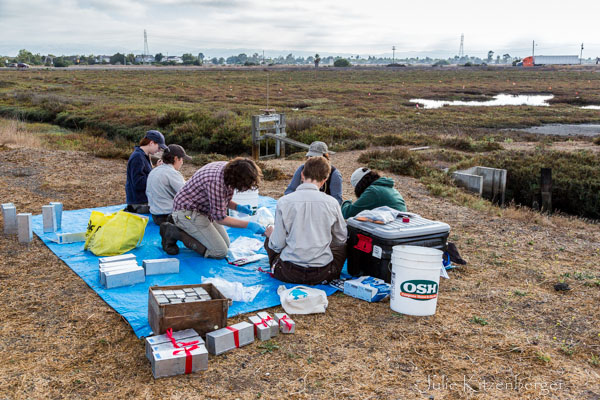 I saw several people, the fields of pickleweed, and many boxes filled with mice. 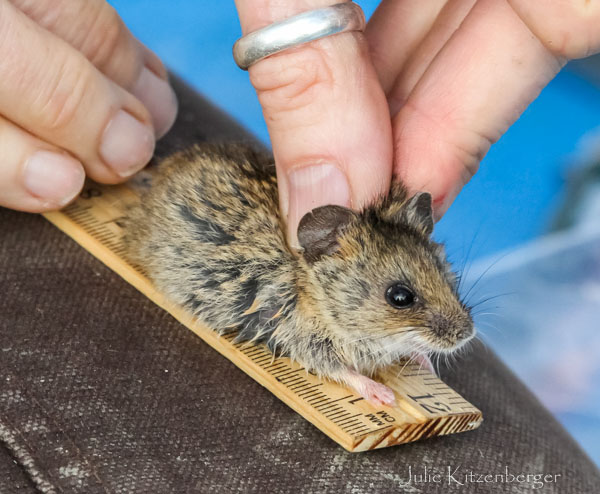 They set me on a flat piece of wood. 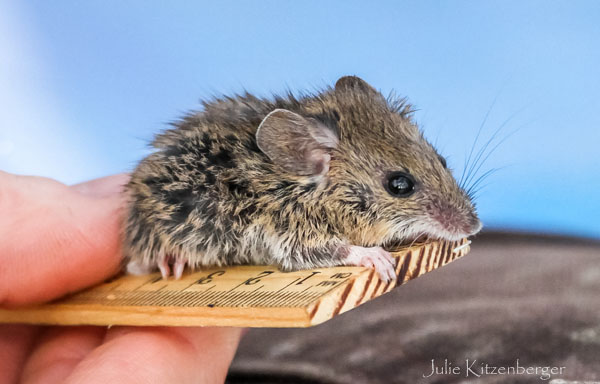 I grabbed onto the edge of the ruler. 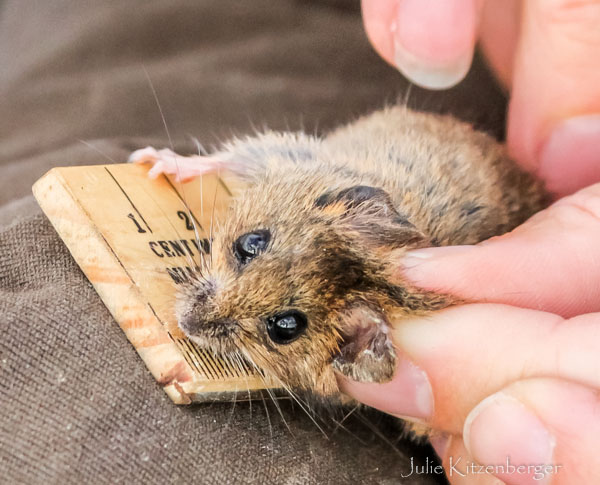 “Let’s measure him,” a voice said. 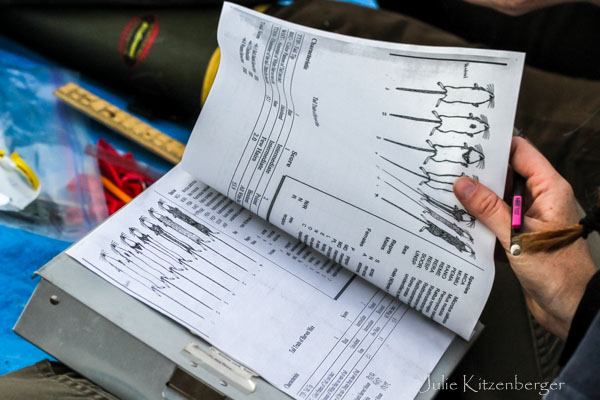 Someone else was using a stick and scratching on something. 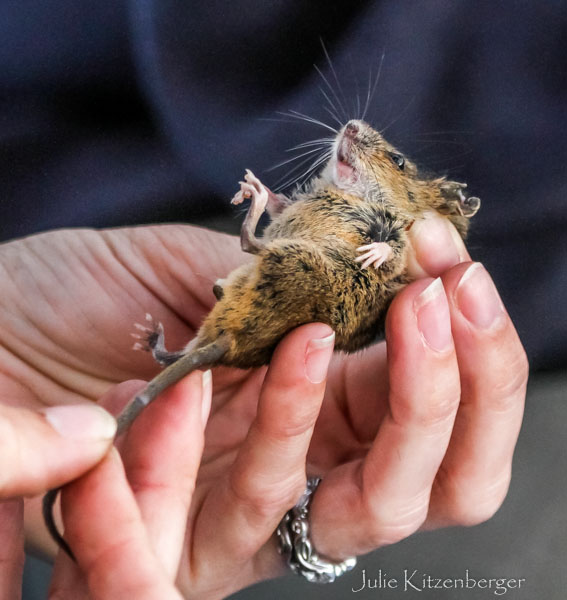 They turned Uncle on his back and placed him in a cupped hand. 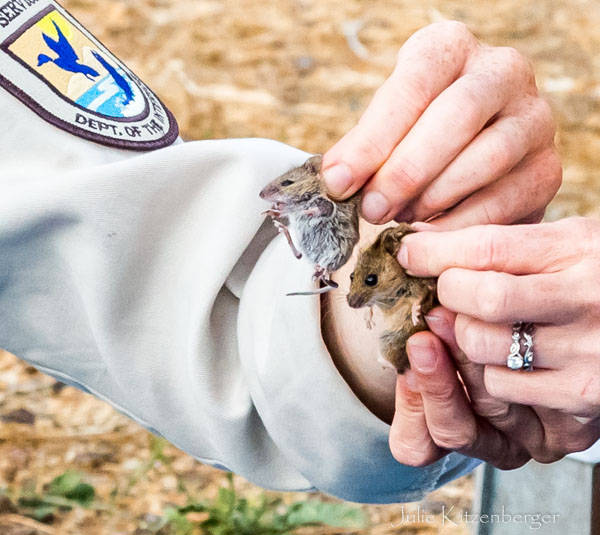 I still have the grey fur of a young mouse; Uncle has the golden-bronze fur of an adult with the cinnamon-colored belly. 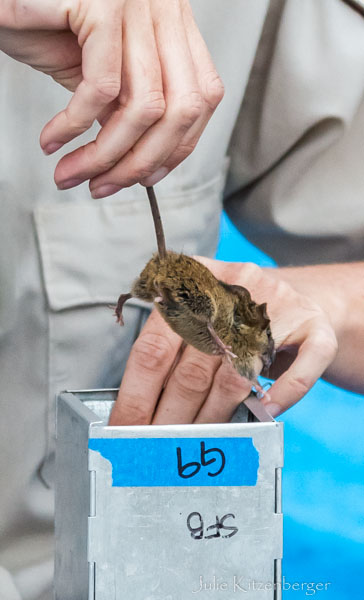 Then they dropped us back into the metal box. 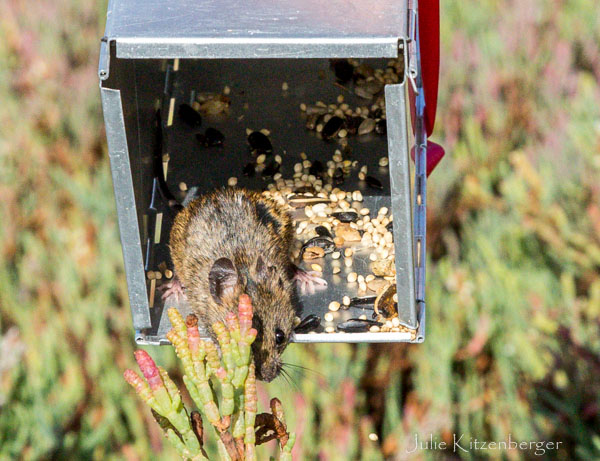 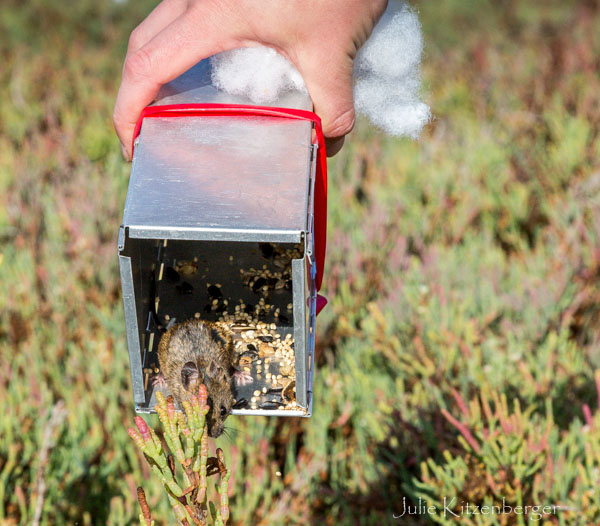 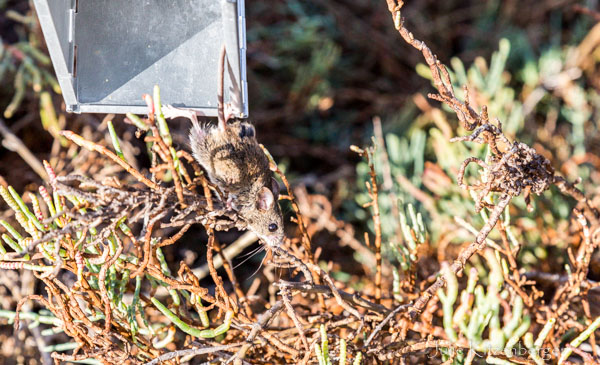 That was the fastest I ever ran in my life.