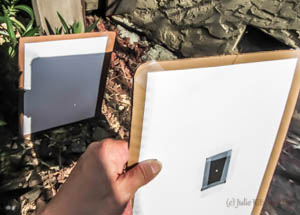 I wasn’t going to bother watching the total solar eclipse.  I didn’t have time.  I hadn’t planned 3 years ahead to reserve a flight and lodging at the Grand Tetons so I could join the masses along the center path of totality.  I hadn’t purchased the special viewing glasses.  I didn’t have any white construction paper to build a pinhole camera.  And I had an appointment that morning that I couldn’t change.  I just didn’t have time.

Even so, I did a quick Google search on viewing the total eclipse without the special glasses.  I sneaked in another search for the exact viewing time near San Francisco.  I printed out instructions on making a pinhole camera “to give to a friend” and then bookmarked the link.  But I wasn’t going to do anything with it because I didn’t have time.

That morning, Monday, August 21, 2017, worldwide focus was on the eclipse.  It was wonderful to see all news channels talking about nothing else.  We were all of one mind, waiting to witness this occurrence of a lifetime.  I was paying attention.  I was marking this event.  I would remember this always.  That was enough. 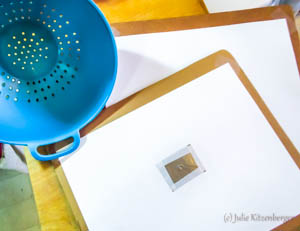 As I waited for my breakfast toast, it occurred to me I could tape pieces of white copy paper to some cardboard.  That would be as stable as construction paper.  While vegies sauteed in the frying pan, I found time to cut a square in the middle of one of the cardboards with an exacto knife.  It took only a few seconds to cut a square of aluminum foil, tape it over the hole, and poke through the foil with a paper clip.

I had my pinhole camera.  Since I didn’t actually have to leave for my appointment for another hour, and there was a narrow patch of sunlight in my back patio, there was no reason not to try out the camera.

I stepped outside.  If the camera didn’t work, that would be the end of it. 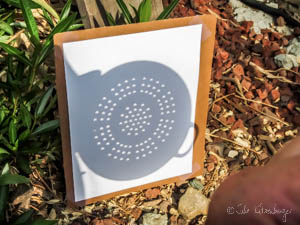 I’d also read about using a colander, so I tried that first.  It worked, but I was more interested the pinhole camera.  Sure enough, a very tiny image of the crescent sun appeared on the paper “projection screen.” 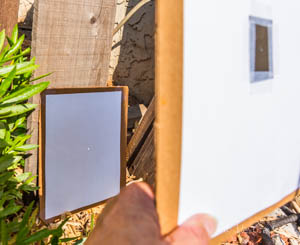 May I say that the hardest thing I’ve ever done was resist turning around to take a peek at the actual sun to see if it was disappearing the way it showed on the white piece of paper.  I don’t know how parents kept their kids from looking.  It took all the discipline I had.  Next time I’ll get the special glasses. 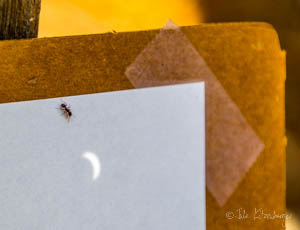 But I’m not the only one who found time to view the eclipse.  One clever ant did, too.  This fine explorer – a scout, no doubt — appeared on the pinhole “negative” or “screen” where the eclipse image was displayed.  It wandered along the edge of the paper and then stepped across the page towards the sun image.  The eclipsed orb was almost too small for me to see but the perfect size for the ant.  It seemed as interested in the astral event as I was and continued wandering about the screen until the “camera” was removed. 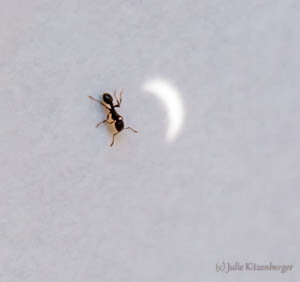 Then I received an email from a friend in Santa Barbara saying an ant there crawled onto her pinhole negative to see the eclipse, too.  Clearly, ants have added colony social media to their messaging arsenal, spreading ideas at the speed of thought.  Ants everywhere were leveraging pinhole cameras to observe the eclipse.

After the sun was covered 75% – the most we would see in California — I dashed inside.  On TV, I watched the Grand Tetons go completely dark under the full eclipse.

Throughout the day I shared my story of the ant in my back patio, clever enough to use a pinhole camera to watch the total eclipse.