An Urban Beaver Plies Its Trade 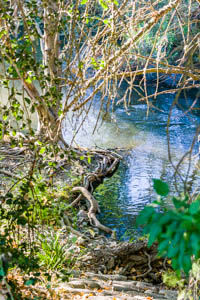 I SAW THE BEAVER !!!   My life is complete!  I’ve seen the Beaver, the elusive resident of a local urban creek.

Having had major surgery sometime back, I’m under strict instructions to walk regularly.  A year has passed since the operation, but I still vigilantly walk 60 to 90 minutes each day.   I take my camera with me on every walk, prospecting for images 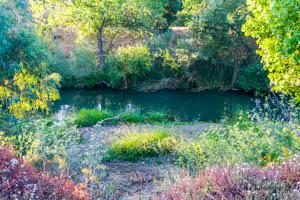 along the trail bordering a local creek.   Adding a hood to the end of my 100-400mm telephoto lens gives my camera an overall length of 14 inches and a visual impact commented on by many who pass.

So the other walkers know me and my camera.  They stop me to make sure I’ve seen what they’ve seen: 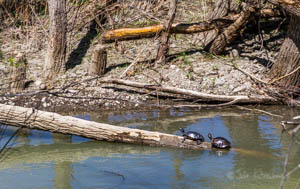 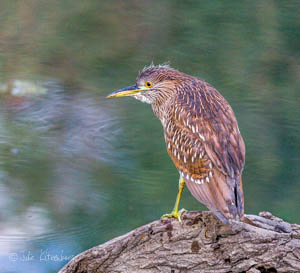 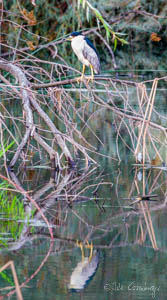 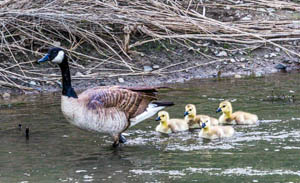 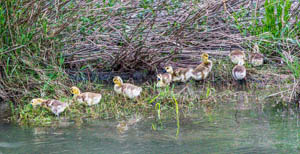 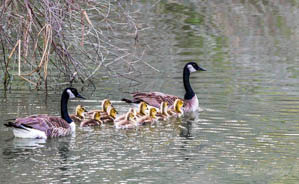 And now a beaver.

I live in the southern part of the San Francisco Bay area.  It is an urban place.  Our addresses change city names based on map delineations, rarely with open space between the towns to mark the transition.  Surface water runoff from coastal foothills drains down into San Francisco Bay.  Years ago the water carved out creeks which still flow through these bustling communities. 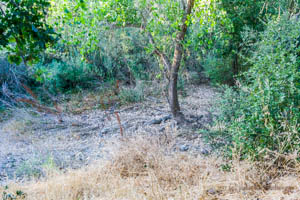 The riparian environment along the creeks offers only the best for our urban wildlife.  It offers nature’s best to us as well.

Lately, trail walkers have stopped me to ask, “Have you seen the beaver?” 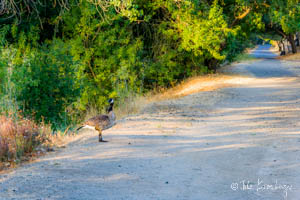 More recently I’ve said, “No, not yet.  Where have you seen it?”

And now I declare, “I’ve got to see that beaver!” 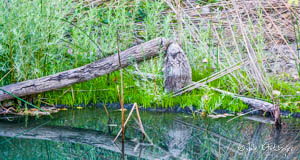 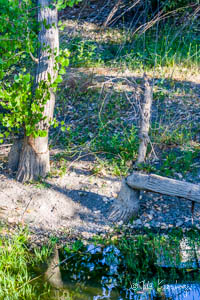 There are several saplings that have been felled, their trunks chiseled to a point like Number 2 pencils we used to use in school.

The walkers’ stories vary:  One man has seen the beaver 3 times in the past 5 years.  Another has seen someone official-looking – perhaps a County Parks employee — put up a motion-triggered night camera and document the beaver building its dam.  A third has reported seeing the beaver too late into twilight hours to get a good photo with his phone camera.

And a couple I chat with regularly, walking their dogs Copper and Gigi, said they’d seen the beaver not too long ago, but much earlier in the morning.

That was enough.  I had to find that beaver!

Now I walk on both sides of the trail to gain views of portions of the creek I would otherwise miss.  The waters meander around clumps of brush and trees. 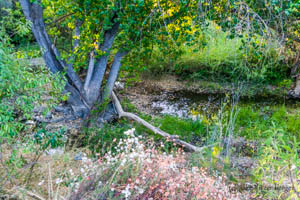 Those walking the trails on each side get different views of part of the creek, part of the time.  The creek is sharing. 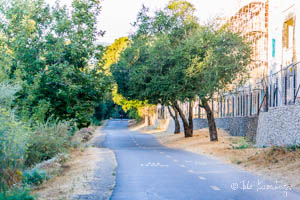 A recent Wednesday morning I was out on one side of the trail, watching the still waters carefully.  I saw ripples.  The creek widens at a certain spot where bulrushes grow and long grasses spread out from the bank.  The stream’s current moves at deeper levels here, with the surface as still as glass. Yet there were ripples.  Something was up.  Up, like the head of a beaver surfacing for air, carefully chewing.  There he was. 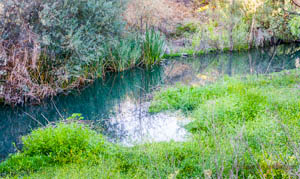 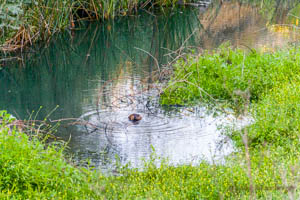 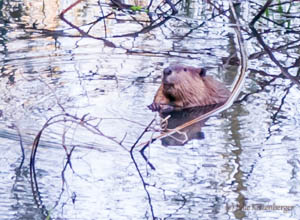 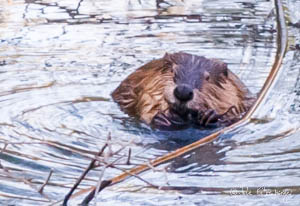 He sat or stood or dog-paddled in one spot for several minutes, head and paws above the water line, working on something with both hands. Was he chewing on a tasty root dug from the bottom of the creek?  Or was he whittling on a piece of sapling for the den he’s building?

He stayed there long enough for me to get several shots and then dived under the water. I snapped a few more of him heading upstream. 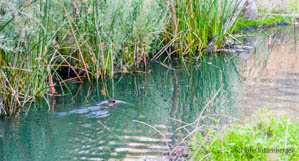 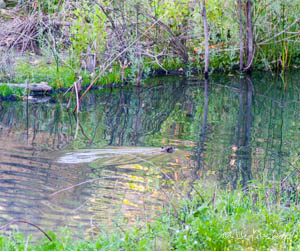 I walked further along the trail, blocked from the creek’s view for a time, and then came to a clearing where I could see between trees to the water.  There were ripples here, too.  Ripples spreading upstream, against the current, meant the beaver was still around. 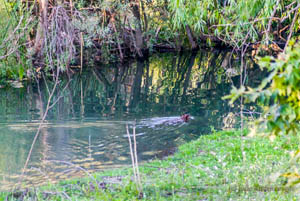 Once again, I saw him gliding along the top of the water close to the far bank, and I captured a few more images.

The beaver disappeared into a part of the creek not visible from the path.  Certain I was done seeing this prize for one day, but overjoyed with the capture, I took a quick walk along the trail on the other side before heading home.  From that side I can see saplings the beaver has cut down, laying across shallow waters.  These felled trees suggest a beaver lodge is nearby.

I walked upstream for about ten minutes and turned back, having far exceeded my daily exercise goal.  Then, as I approached the main street that would return me to urban bustle, with the early sun on the creek waters, there he was! 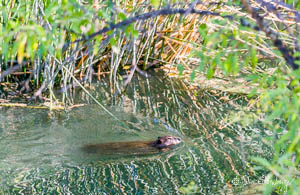 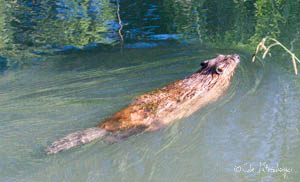 The beaver was returning downstream to the area I’d seen him earlier.  He was gliding along the surface of the water, midway between the banks. 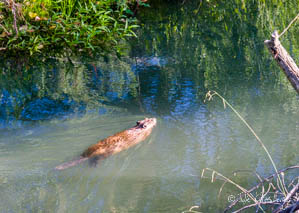 The sun lit the full length of him perfectly, long paddle tail included.  I could even see that his eyes are gold and his ears are small and round.

“Now you don’t have to look anymore!” my Mom said.

Well, actually . . . now I’m hooked.  Schedule permitting, I’m out early every morning.  And knock on wood (or chiseled sapling), I’ve gotten a glimpse of the beaver each day since. 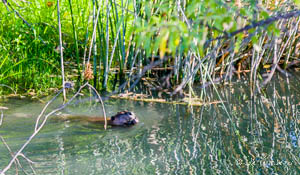 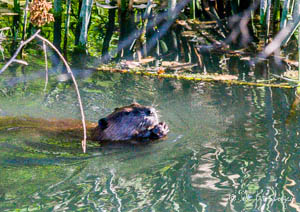 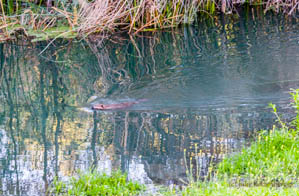