[You can see all these images, plus more, in  high resolution,  here.]

As I explore new parts of the Bay Trail, I drive further and further each time.  For this ride, at the top of Map 7, I drove 27 miles to the Fremont Visitor Center of the Don Edwards San Francisco Bay National Wildlife Refuge.

Rather than go on 880 north, I took city streets:  McCarthy Boulevard, which becomes Fremont Boulevard; left on Cushing Parkway which becomes Boyce Road and Cherry Street; left onto Thornton Avenue with a left into the Refuge.  The sign says the gate opens at 7 a.m. and closes at 7 p.m.  There is plenty of room to park outside of the gate.

Before the Refuge gate, you can bear left and park near a boat ramp.  I stayed right and parked by the bungalow Visitor Center, which is currently closed.

October is a really nice time to ride the Bay Trail, although lately it’s been unseasonably cold.  I wore fleece-lined leggings, the kind with zippers from the ankle to the calf so that you can pull them off over your shoes.  Although great air quality and a gorgeous blue sky, it stayed so cold that I left the leggings on.

There are a series of hills that line the shore.  The largest one is south of the Dumbarton Bridge in the Don Edwards Refuge, where I went on this ride.  Several more are just north of the bridge, some still on Refuge land and some within the boundaries of the Coyote Hills Regional Park.

My ride began on the Tidelands Loop Trail as it goes up the hill.  There are some lowland level portions of the Loop, but the branch that goes to higher elevation offers incredible views.  Any first-time visitor should opt for the views, as I did on this ride.

I walked my bike up the steep hill past a large wooden building that used to house the Visitor Center.  The view of the Bay is amazing.  One can see different portions of Bay waters sectioned off by levees.  Some sections in the distance appear white – those are in the process of being restored from salt evaporation ponds to marshlands.  One area is called the Newark Slough, and I rode around that later.  In the distance, the Dumbarton Bridge arches over the Bay waters.

I followed the Tidelands Trail over the top of the hill, where a sign warns not to ride bikes down the other side.  Two upright metal poles, connected by a chain, create barriers wherever the trail turns to stop out-of-control riders from heading off the slopes.  No one had to tell me twice.  It was plenty steep, and I carry a backpack weighing about 18 pounds, so I walked (see Note).  Coming down the other side and looking left (east), one sees several marsh areas.  These have been restored in the past few years.  They are expanded habitat for the endangered salt marsh harvest mouse.

At the bottom of the hill, the trail levels out and bears right, winding like a snake until you reach a bridge that crosses one of the sloughs and runs into the Newark Slough Trail.  At the T intersection, I went left.

This 4-mile trail is wide enough for Refuge vehicles.  Part of it was covered with fresh gravel, which requires full attention to ride on.  As I rode along, I heard swooshing sounds made by swarms of tiny flies rising a few inches up from the soil each time the bike wheels plowed through.  Large flocks of ducks floated nearby.  Based on the broad flat shape of the end of their beaks, I think they were northern shovelers.  These ducks, along with northern pintails and American wigeons, will be here until February.  In addition, I saw quite a few black-necked stilts, some smaller shorebirds, a few snowy egrets, and one Great egret.  No pelicans up this way.

From almost every vantage point of the hill or trail, the Dumbarton Bridge arches in the distance.  Near the bridge sits a dredge, nick-named The Mallard, among shallow marshes.  Dredges are used to remove mud and weeds from an area of water by scooping and dragging.  I don’t know if this one is still active.  There is a story that one of them slowly makes its way up the Alameda Creek, a little further north from here, with its crew sleeping on board during the trip.  West of the dredge is a small white building flanked by three red and white towers, transmitting 50,000 watts for KGO AM radio (see Note at the end of the post).

As on the other rides, I rode into the wind a good portion of the time.  Add to that stopping frequently to take photos and I don’t cover as much of the Bay Trail on each ride as others will be able to.

Along the lower branch of the Tidelands Loop Trail sits a small bungalow of weathered wood, now a faded red, and boarded up windows.  Joe Pine, of the nearby town of Niles, built the cabin and lived here fishing until the late 1960’s.

Coming to the end of the Newark Slough and Tidelands Trails, I turned left on Marshlands Road.  The Bay Trail continues west alongside Highway 84 where traffic flows onto and off of the Dumbarton Bridge.  This part of the Bay Trail is not marked on the map, but I knew there was a fishing pier at the end of the road.  It is a 3.5-mile ride from the Refuge trails to a parking area.  Those planning to fish have to walk the last half mile to the pier.  There were four or five people at the pier and more than 20 poles set up, leaning against wooden railings.

From this east side of the Bay, one can see much more of the Dumbarton Bridge rising out of the water.  The Bay seems shallow here for quite a distance.  As on the west side, there is an entrance to a pedestrian/bikeway going up onto the bridge itself that will take you across the Bay.

There was a steady cold wind as I rode alongside the bridge and out to the fishing pier.  There are many benches spaced along the half mile.  I stopped at one, put on my Solvang windbreaker (see Note on Back Packs) and ate lunch.  Another 3.5 miles on return and I was back to my car, a total of 18 miles for this ride.

My next ride will start at the Eden Landing Ecological Reserve, in the middle of Map 8, close to the southeast side of the San Mateo Bridge.  Can’t wait to continue exploring the Bay Trail!

Note about the KGO Transmitter:  KGO 810 (a local AM radio station) began broadcasting 50,000 watts, the maximum allowable power, in December 1947.  Its transmitter facility was constructed on land fill near the eastern approach to the Dumbarton Bridge near Fremont. Three 300-foot towers were constructed, each anchored in salt water.  These towers are noticeable enough that pilots use them as a waypoint in communications with local airports.  All three of KGO’s white and red towers were replaced after two partially collapsed during the Loma Prieta earthquake in October 1989.

Note about My Back Pack:  I have lots of things I need on these rides, so I wear a backpack while I ride.  It weighs about 18 pounds.  It is made for photographers with many zippered sections.  One holds my 70-ounce Camelbak water bladder with sipping hose.  I fill the bladder one-third with ice and one-third with water.  I put my chicken salad lunch in a ziplock bag, flattened, next to the ice in the bladder to keep it cold.  Another compartment holds my red and yellow biking windbreaker from a 50-mile ride in Solvang, CA, and the Santa Inez Valley years ago.  The largest compartment has a liner I insert that can hold my camera, with two other pockets for sunscreen, lunch items like apples and peanuts, and my cell phone with a stand.  A smaller zippered pocket holds a head lamp and first aid kit.  And the final compartment stores spare bike inner tubes, a small bike pump, and related tools. 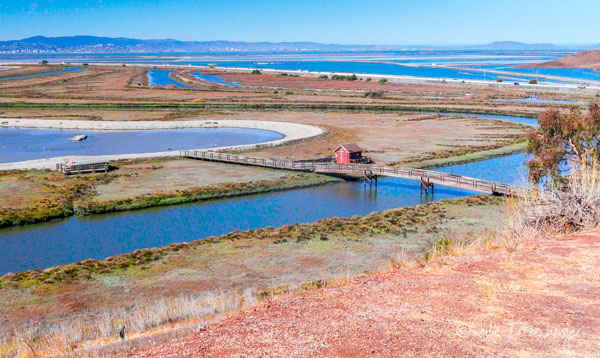 My 4th ride – the Fremont Refuge 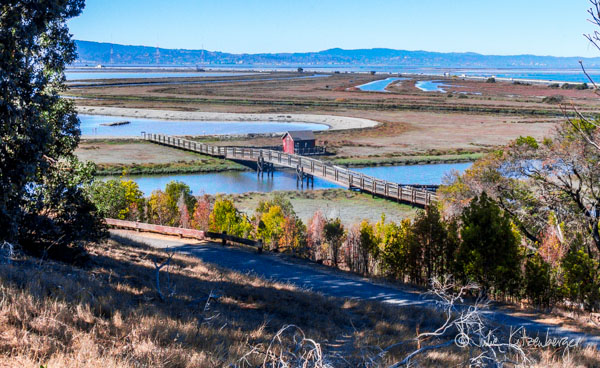 The red picnic shelter by a pedestrian bridge. 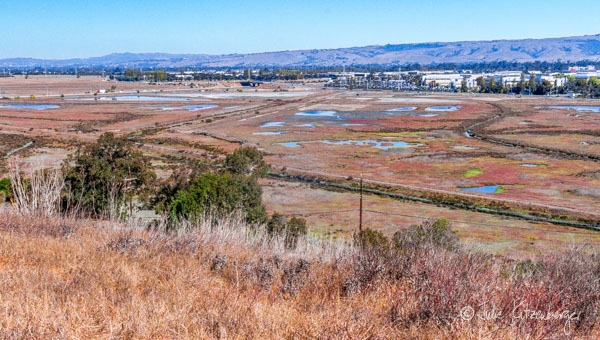 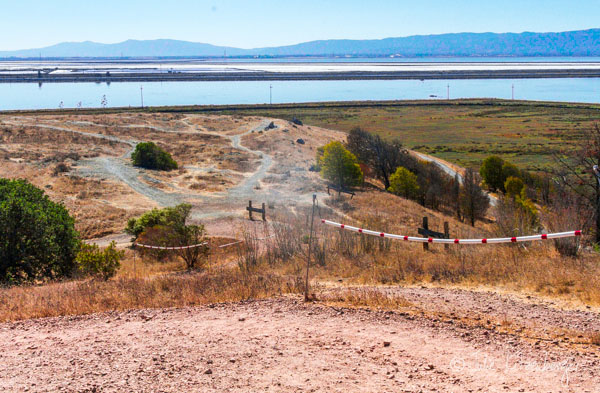 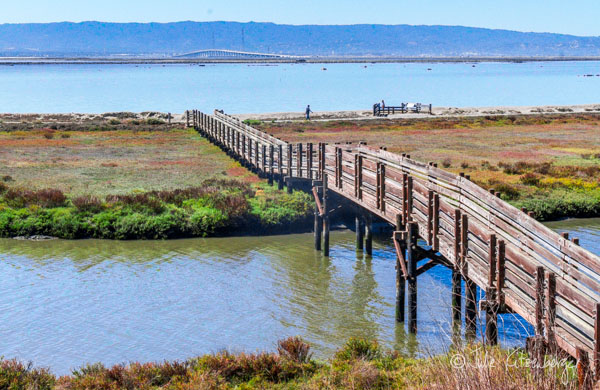 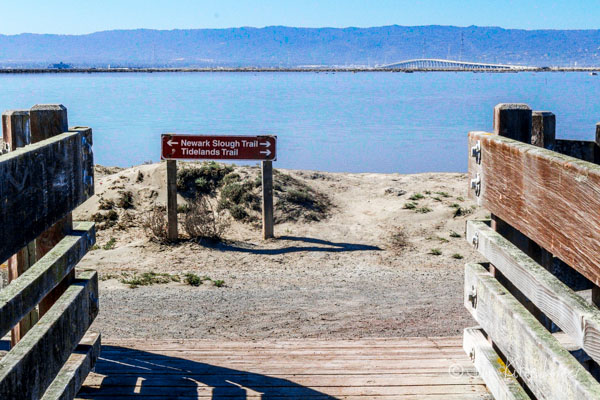 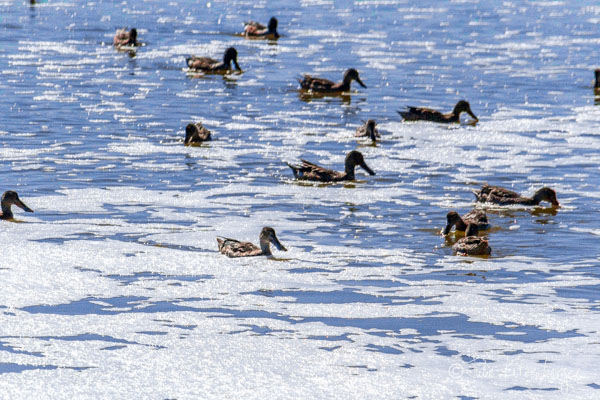 The northern shovelers hang out near the pump 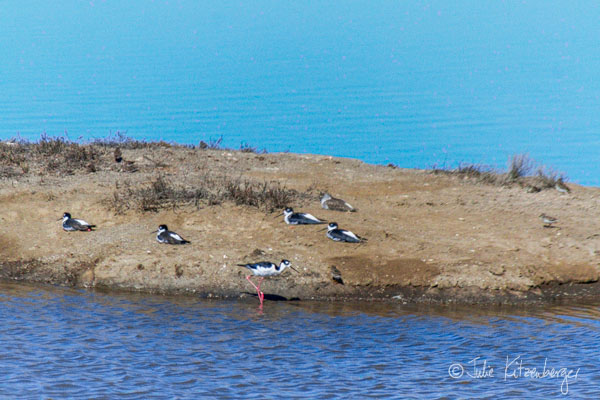 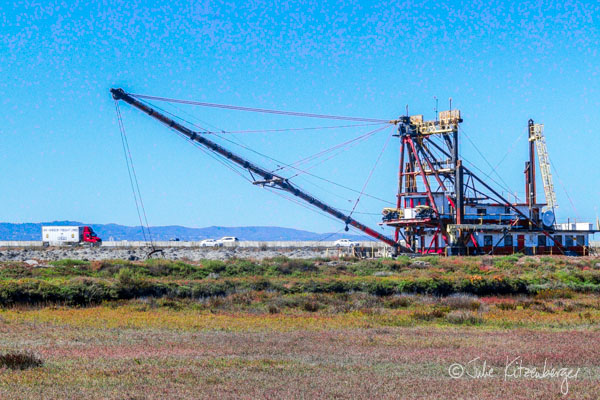 Closer view of the dredge, with a truck in the background on the entry to the Dumbarton Bridge 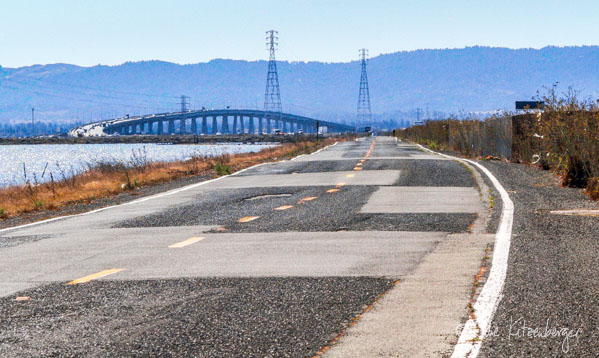 Marshlands Road to the fishing pier – rougher to ride on than the dirt tails! 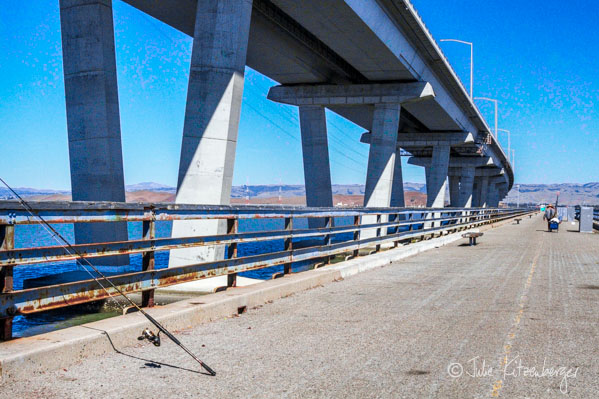 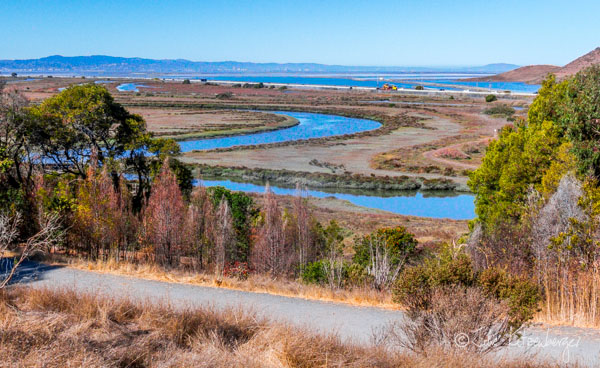 Me at the top, where the vista is unparalleled. 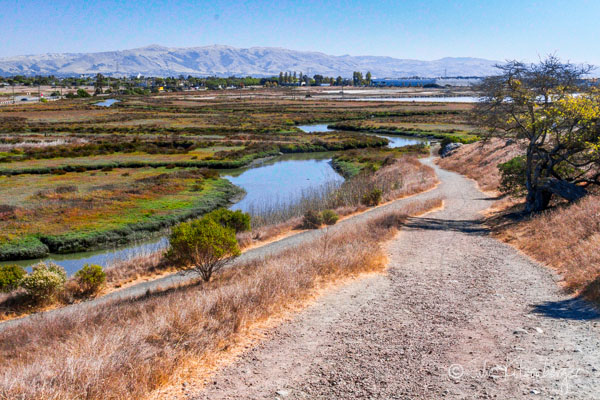 Walk your bike going down the hill. 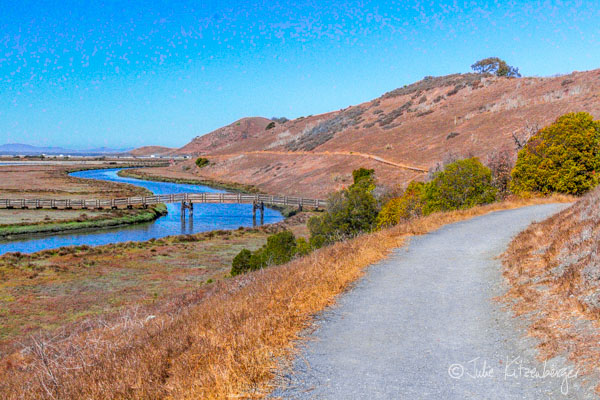 The lower path, to the bridge to Newark slough 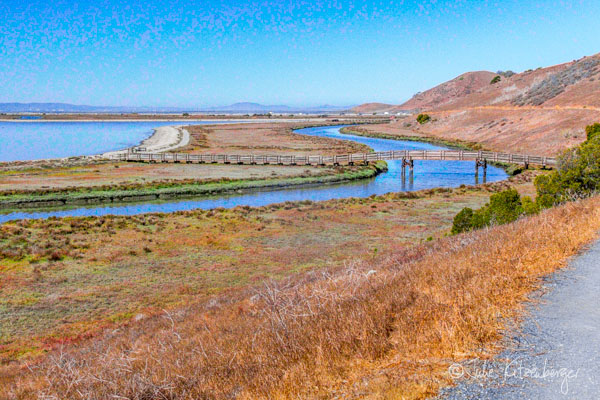 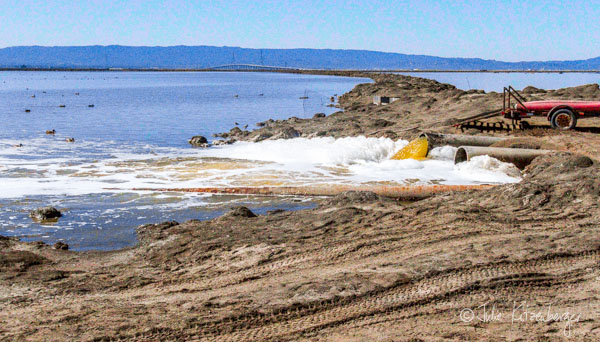 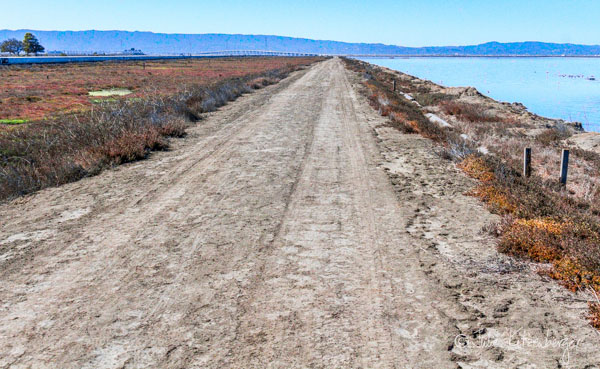 Riding the west side of the Newark Slough 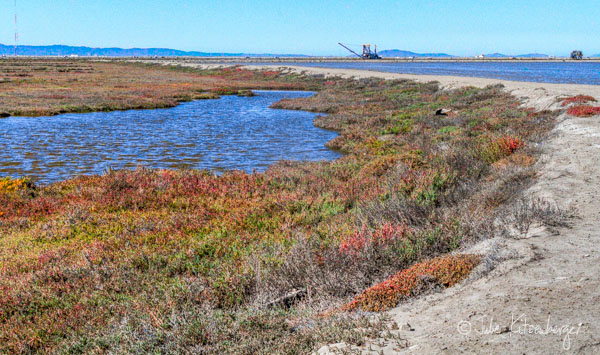 The dredge in the distance 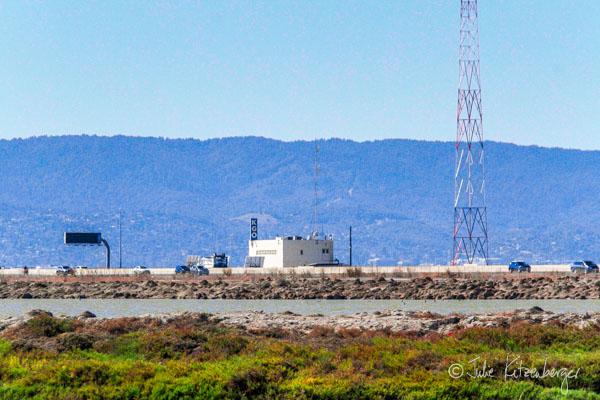 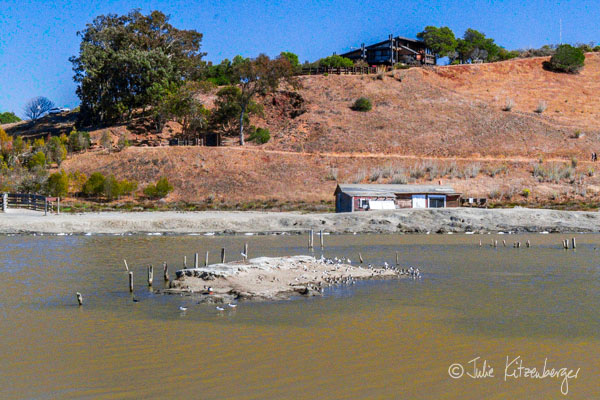 Where Joe Pine lived till the late ’60s 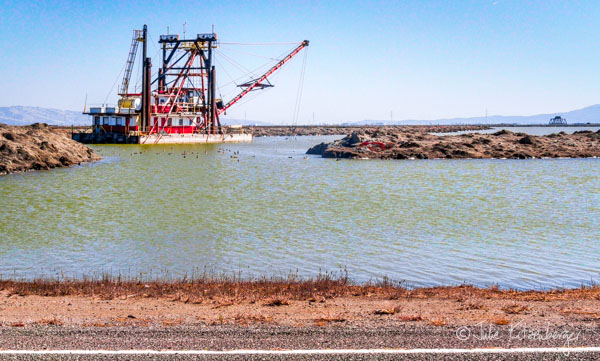 View of the dredge from the road to the Fishing Pier 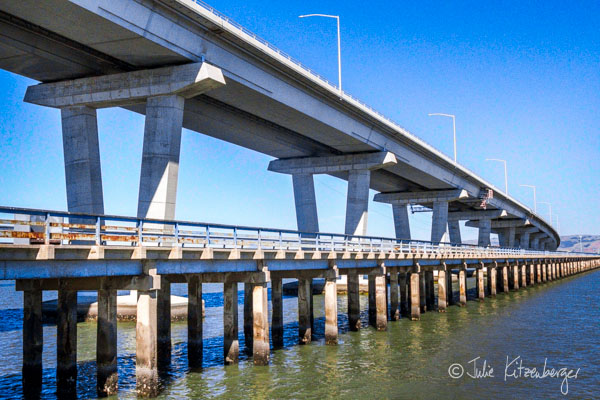 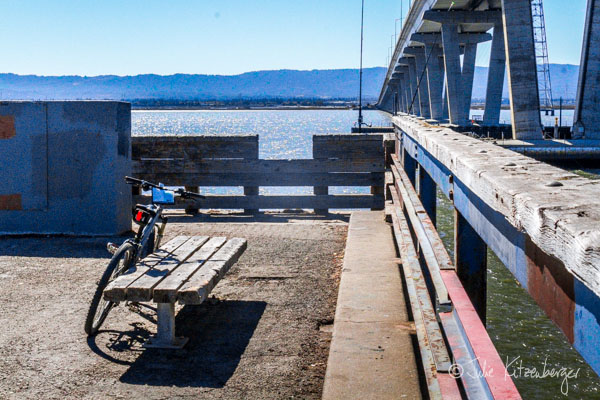 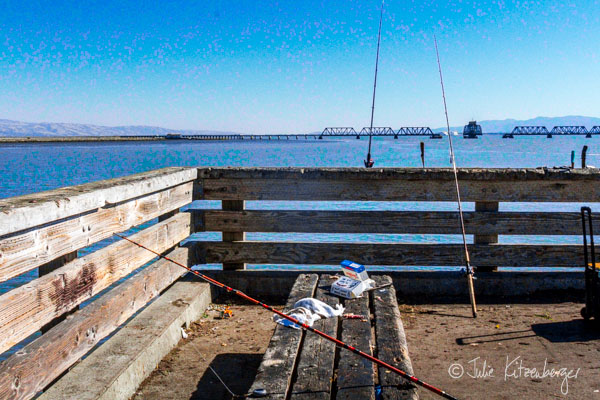 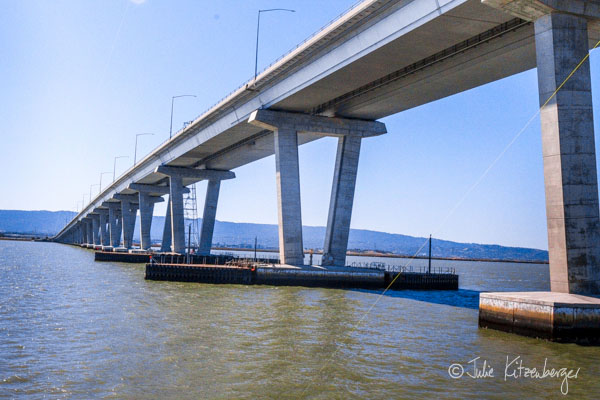 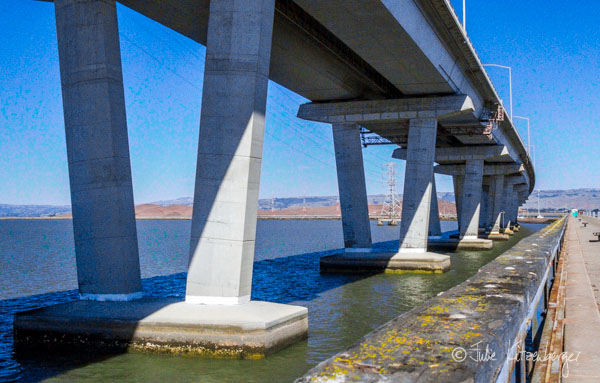