This is my ninth bike ride on my quest to travel 350 miles of the S. F. Bay Trail – those miles completed so far of the planned 500 miles , this time continuing north on the west side of the Bay, following Map 3.

On November 13th, 2021, I parked on an island called Safe Harbor, in South San Francisco, just off N. Access Road.  There is a homeless shelter there called the Safe Harbor Shelter.  It must be a peaceful place to stay, surrounded by Bay waters and wildlife on all sides.

First I rode on the dirt trail that goes around the Safe Harbor Island.  A sign indicates that the trail is also a Par Course Fitness Circuit, with fitness stations that have been there since 1975.   Not far across the water is a sign on a hillside that says “South San Francisco Industrial City.”   Low tide revealed mudflats.  Flocks of birds I couldn’t identify flew down low, then up high, in perfect sync with each other as they made their graceful turns.  There must have been some type of bridge going over this water years ago; quite a few timber pylons remain.

Completing the loop, I passed a snowy egret (the one with the yellow feet) as I followed the paved Bay Trail west along North Access Road to Airport Boulevard.  For a while there is a well-marked, dedicated bike trail to follow, separated from passing cars by a low barrier.  When this bike trail abruptly ended, I turned right (north).  I lost the Bay Trail for a while and ended up on city streets in San Bruno.  If you go as far as Utah Avenue, you’ve gone too far and are off the Trail, which bends east somewhere to bring you back to the Bay’s edge.  I had to do some backtracking to locate where the Bay Trail picked up again.

I had no idea there were so many places for people to park their boats along this section of the west Bay.  Next to one of these marinas, some dredging equipment balanced on a small barge.  It scooped earth up out of the marina and deposited it on the barge.  It looked like some new boat berths were being created.

There is a square piece of land or peninsula sticking out into the Bay beginning at Oyster Cove Marina, with the Brisbane Marina and Sierra Point Marina situated on its west edge and Sierra Point at the north corner.

Many information signs describe the history of Sierra Point and Brisbane, the city lying on the north border of San Bruno.  Evidently Sierra Point was first a landfill site, which explains the square form of the peninsula.  San Francisco City and County had a law prohibiting landfills, so the task fell to Brisbane, in a different county (San Mateo).  This began as an emergency measure to dispose of the debris after the 1906 earthquake and remained a habit despite complaints from local residents.

Brisbane became a city in 1961.  Sierra Point became its second landfill in 1962 and several years of controversy ensued, with 250 acres of tidelands in the area at stake.  The Save the Bay Committee succeeded in amending one contract to keep the disposal of waste only on the west side of Highway 101, away from the tidelands.  Various lawsuits continued until 1972, when the issue was settled once and for all and the tidelands were protected through a purchase by the Sierra Point Development company.  An office park now sits on the edge of the Bay lands in this area.

The information sign here provides a timeline of the area:  The Ohlone Indians, formerly known as the Costanoans (“costeno,” with a tilde on the ‘n,’ means “coast dweller” in Spanish), lived along the coast from the San Francisco Bay south to Monterey Bay and lower Salinas Valley.

By 1776, the Spanish had arrived, followed by the Franciscan monks, with large land grants established.  Under Mexican rule, the lands were released to private enterprise.

In 1929, a realtor, Arthur Annis, developed the area now known as Brisbane and sold lots for as low as $50, appealing to those impacted by the Great Depression.  Over 400 homes were built there between 1929 and 1933.  By 1932, the town had a post office, elementary school, bus routes, fire department, library, and natural gas and utilities.   By 1940, it had almost 2,500 inhabitants.

An information sign says, “After WWII, a second wave of immigrants came, and by 1950 the city had 441,718 residents.”  I think this is a typo.  If I do a Google search on Brisbane’s population today, it says 4,645.  In addition, I have visited Brisbane a few times and it is a lovely, quaint, and tiny town.  The City of Oakland, across the Bay, has a population of over 422,00 and covers a much larger area of land that Brisbane.  My guess is they meant to say Brisbane had 4,417 residents by 1950.  But who knows for certain?

After riding the contours of the square peninsula, passing Sierra Point, I followed a Bay Trail detour through a business park.  I picked up the Trail again to pass underneath Highway 101 onto Sierra Point Parkway and continue north on a wide paved road along the east side of Brisbane Lagoon.  The lagoon is a long, wide body of water without much of visual interest along its borders.  At the north end of the Lagoon and 10.68 miles of my ride this day, this portion of the Bay Trail ended.

On the return trip, I passed a large gathering of California brown pelicans along the shore near Oyster Cove Marina.  A ferry terminal near Oyster Point looks bright and modern compared to the remains of old pier pylons nearby.  The sun seemed to be lowering in the sky, so I kept on, finally stopping for a late lunch at San Bruno Park, 17.13 miles on my ride.  Like so many spots along this section of the Bay Trail, the view from this park was spectacular.

Following the same route back to my car, the total distance I traveled on this trip was 20.64 miles.  My bike’s odometer has now reached 153 miles riding the Bay Trail.  Another great ride! 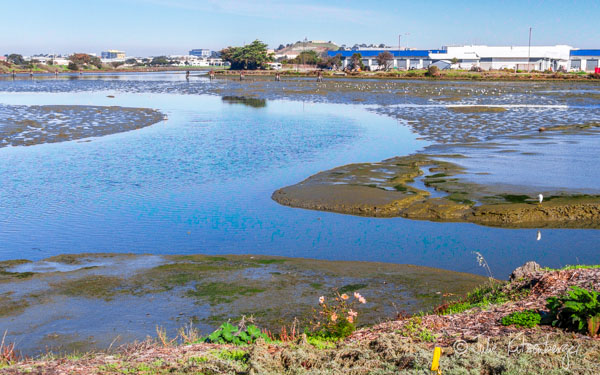 The Safe Harbor Shelter (on right)

Flocks of birds flying in sync 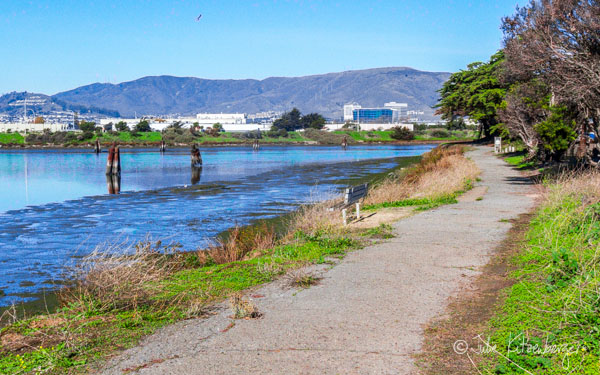 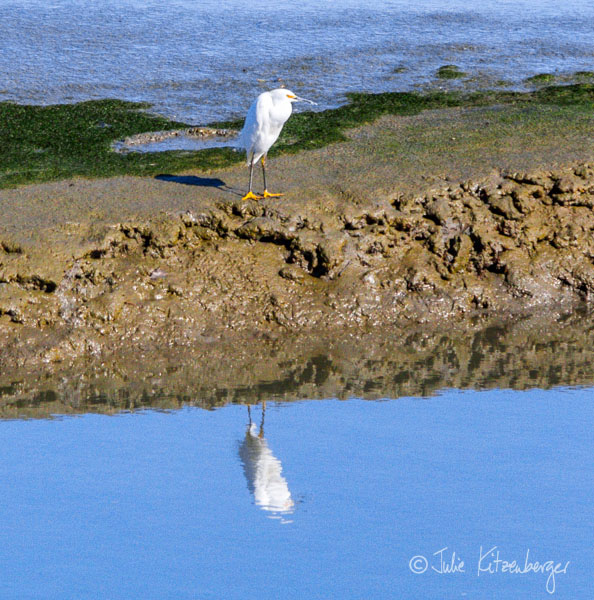 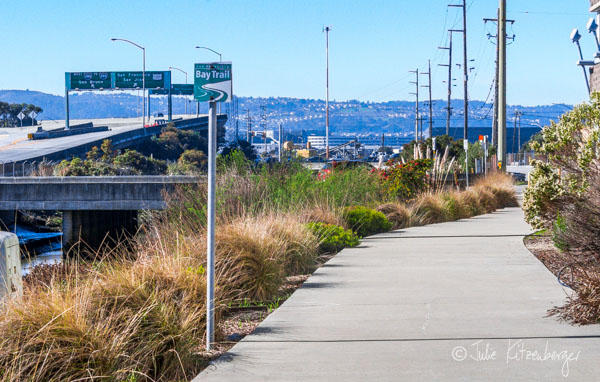 Riding along the west edge of the Bay. 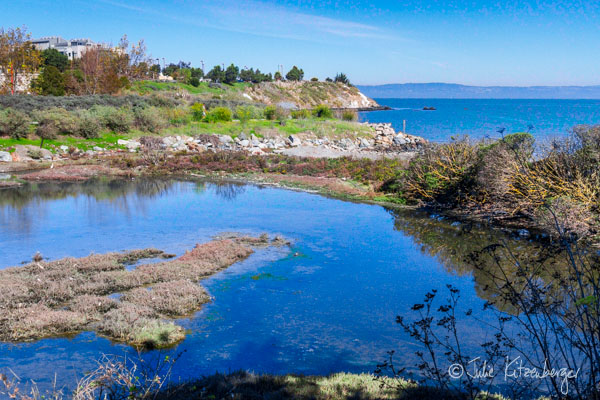 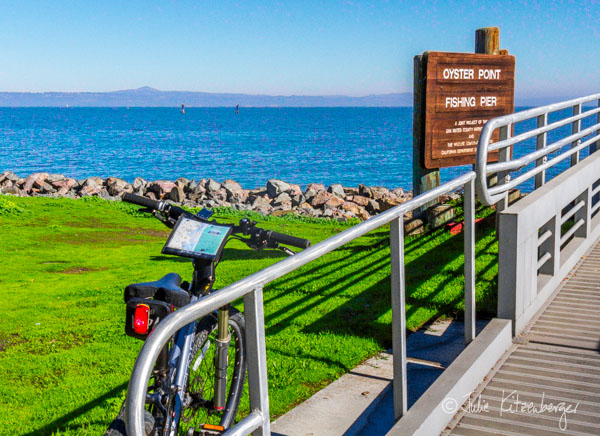 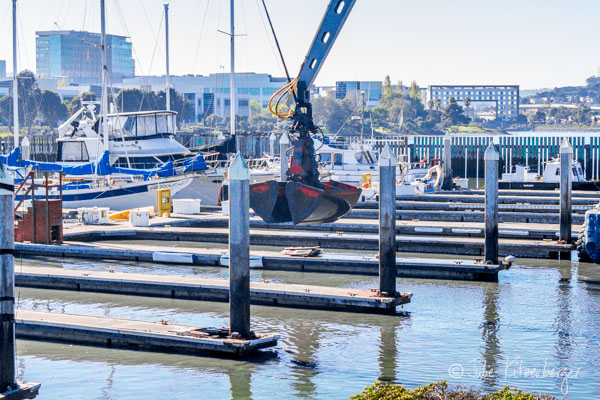 It looked like some new boat berths were being created. 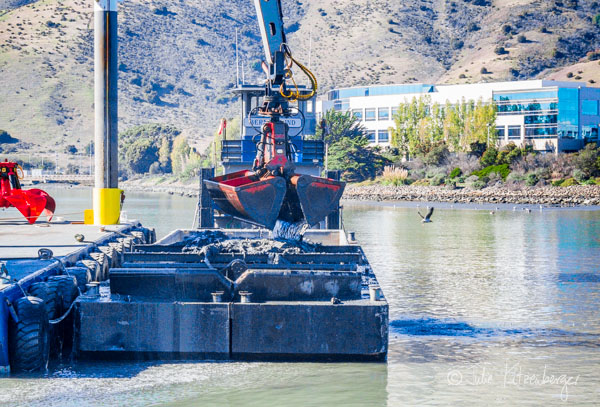 Depositing the soil on the barge. 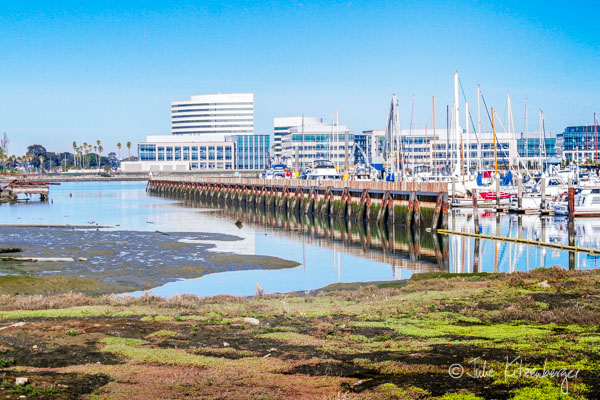 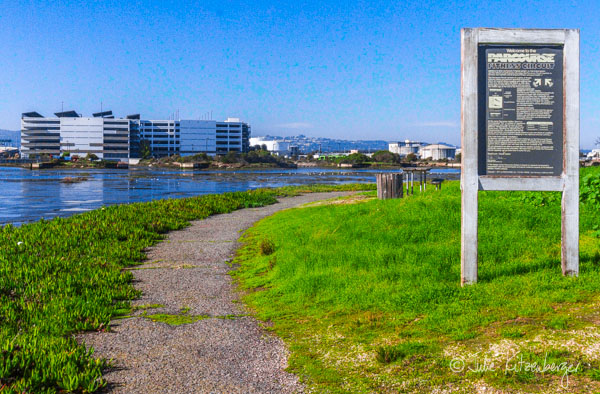 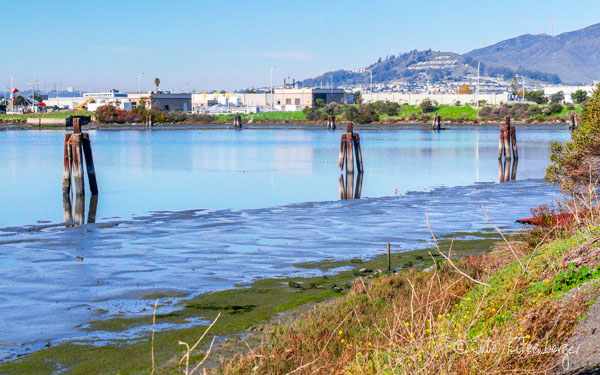 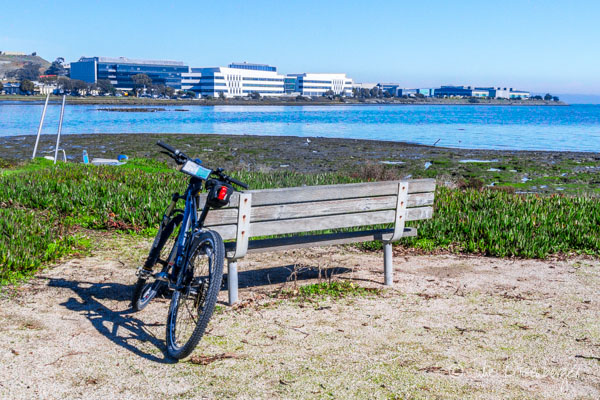 On the Safe Harbor Island loop 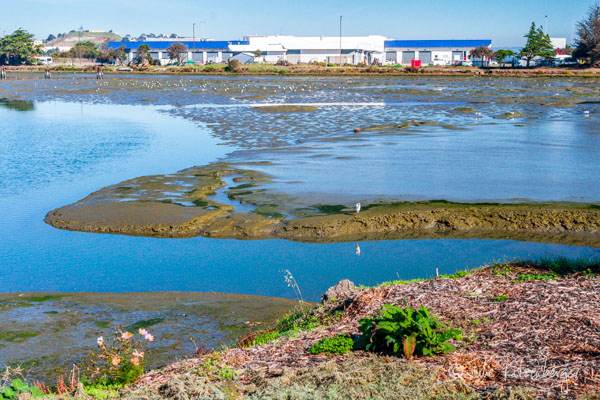 Continuing along the Bay Trail west along North Access Road 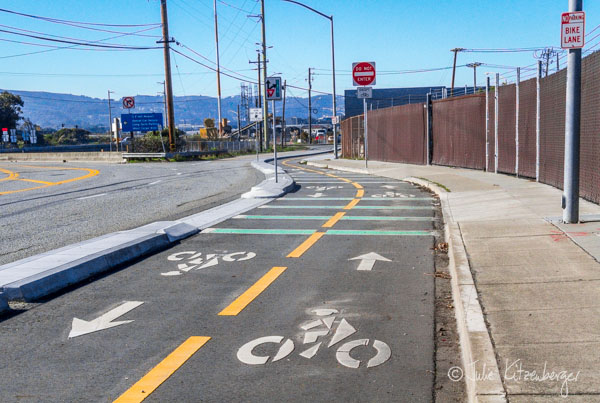 For a short while there is a dedicated bike trail, separated from passing cars by a low barrier. 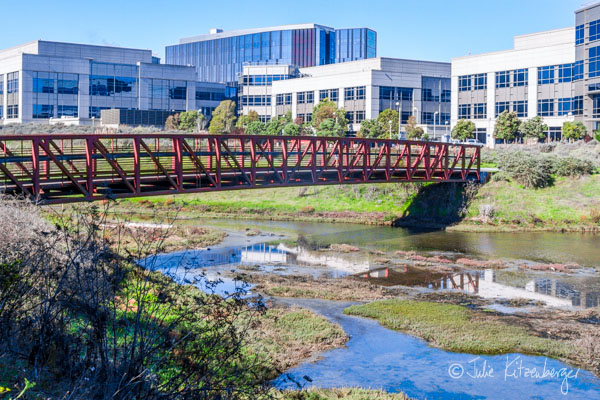 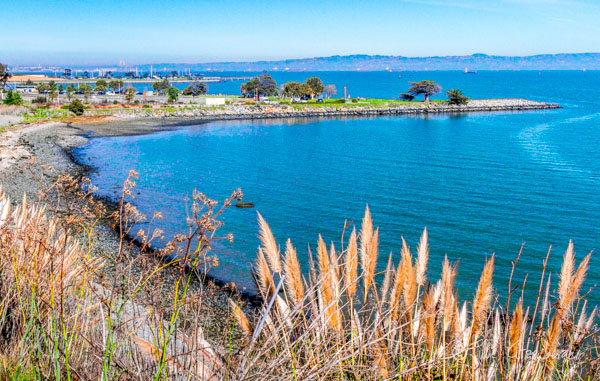 The contour of the shoreline cuts in and then out into the water, forming many small points and harbors. 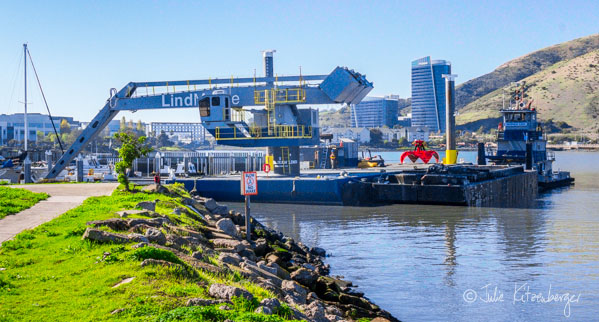 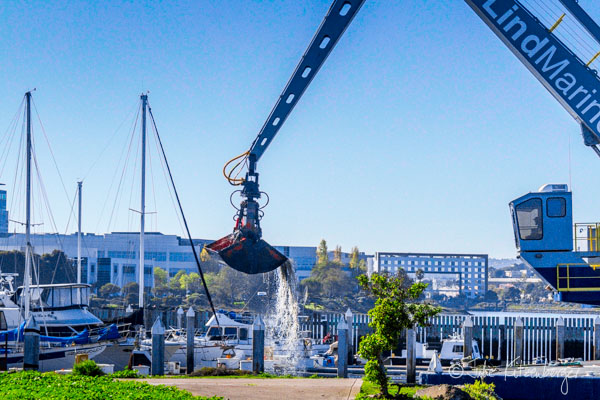 Scooping earth up out of the marina. 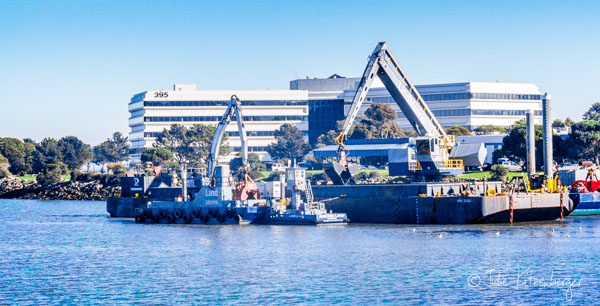 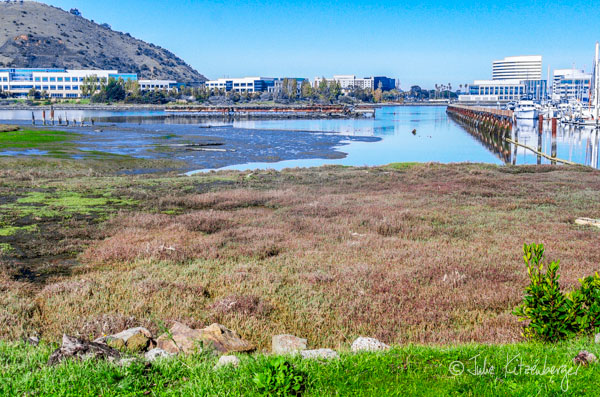 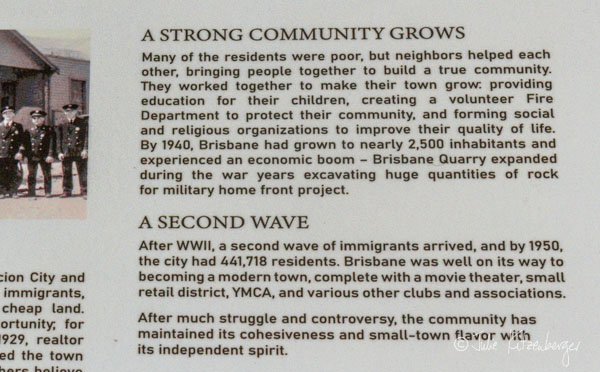 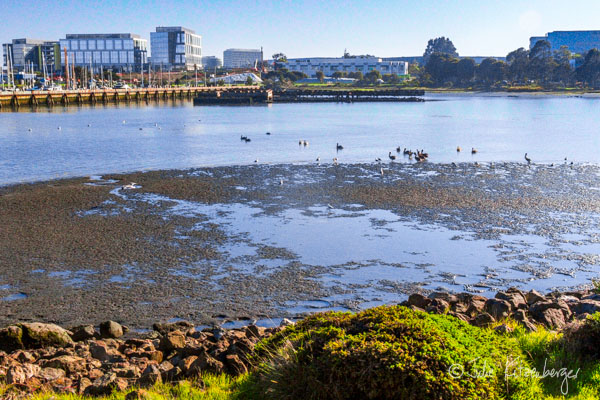 California brown pelicans along the shore near Oyster Cove Marina. 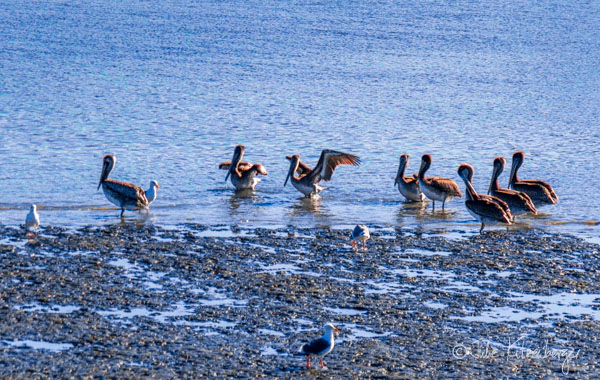 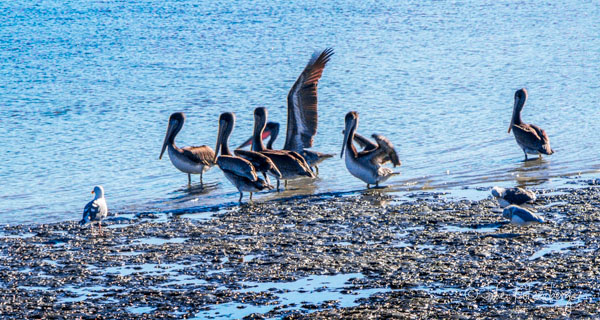 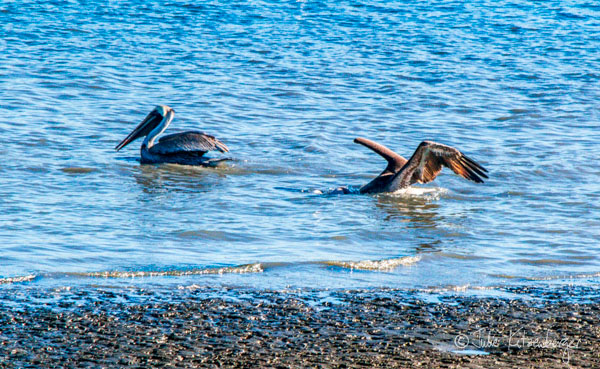 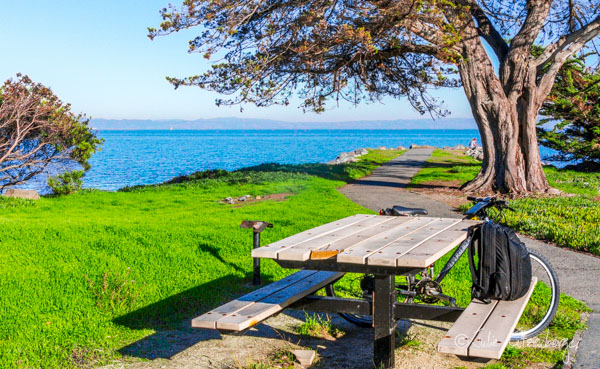 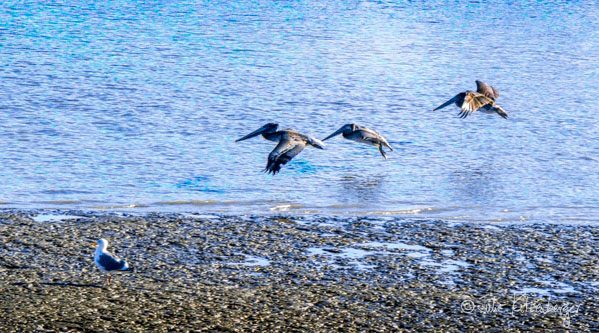