This was my seventh bike ride, as I travel 350 of the 500 miles of the S.F. Bay Trail completed so far, continuing north on the east side of the Bay.

In late October, the sky was overcast, although rain was not predicted.  I chose a paved route on Map 9, just in case the mud from the prior week’s record rains had not dried enough to support a mountain bike.

I began this ride at the Oyster Bay Regional Shoreline, part of the East Bay Regional Parks, accessed from Neptune Drive in San Leandro.  There is only street parking.  By mid-morning on a Saturday, things were so parked up that I had to park three-tenths of a mile away.

At the park entrance, the trail divides, going to the right up a hill into a municipal golf course, or left around the base of the hill, which is the beginning of this portion of the Bay Trail.

Riding along the Bay’s edge and approaching the wide San Leandro Slough, I saw quite a few buildings across the water.  At first I thought they were part of a municipal airport, only to discover later that they sat on the edge of the Oakland International Airport.

The trail continues across the Bill Lockyer Bay Trail Bridge which spans the slough.  As on other parts of the Bay Trail, there are informational signs posted.  I learned about an invasive plant, a hybrid called smooth cordgrass, that spreads out and covers mudflats and shorebird feeding areas and overwhelms the native cordgrass.  It invades tidal flood control channels, increasing the possibility of localized flooding.  The East Bay Regional Park District is part of a consortium of agencies that have been working on the Invasive Spartina Project (www.spartina.org) since 2000 to develop action plans to eradicate invasive plants such as this.

From the middle of the Bill Lockyer bridge, looking east one can see the Oakland hills in the distance.  Looking west, one sees the edge of the Oakland airport.  Just across the bridge, there is a cyclone fence barring entrance to a basin constructed in 1972 to discharge treated wastewater into the Bay.  The pond now only operates on an emergency basis and is part of the San Leandro Wetland Treatment Project.  Information boards and a schematic attached to the fence (seen in high resolution here) describe in detail how the project is using an “innovative, nature-based treatment system” to transform the area which, when completed in 2022, will “polish up to one million gallons of wastewater per day.”  The City of San Leandro is testing this system for potential adoption around the Bay “to improve water quality and restore disturbed habitats threatened by sea level rise.”

The San Francisco Bay Estuary has been nutrient-rich for decades from heavy inputs of nitrogen generated by 40 wastewater treatment plants that discharge over 400 million gallons of treated effluent into the Bay every day.  The nitrogen level needs to be reduced to prevent algae blooms among other toxic conditions.

The Wetland Treatment Project’s process includes having the wastewater seep through wood chips embedded along the perimeter of the pond to begin the process of removing the nitrogen and other pollutants.  Sunlight exposure in the shallow portion of the system will break down organic contaminants like pharmaceuticals and pesticides.

The occasional plane coming in low for a landing kept me aware that the airport was nearby.  A portion of the trail, bordered by tall pampas and other grasses, brought me behind the airport and closer than I expected.

As I continued north, the trail took a turn to the right (east), and I found myself on the other side of a barrier next to the BART tracks coming out of the airport.  A train rattled by quite close to the fence.  Soon after, the trail dumped me onto Doolittle Drive for a street portion of the Bay Trail.  There was plenty of signage directing one to turn left (north) to reach the next off-street portion of the trail.  Although there is a wide bike lane designated on the street, this is an area where traffic is headed to and from the airport, car rentals, and other travel services, often in a hurry.  I chose to walk my bike along the pedestrian walkway, just to be safe.

I followed the bend to the right, proceeding on the Arrowhead Marsh Trail towards the marsh itself, along Airport Channel which opens into San Leandro Bay.  Who knew there was a San Leandro Bay?  Not me.

San Leandro Bay is bordered on the west by the edge of Bay Farm Island, where the Oakland International Airport resides on its southern end.  On the northwest, the Bay touches the southern edge of Alameda, an island sharing the name of the County, and very near Fernside Boulevard.  Also at the north end, the Bay links to the Tidal Channel which joins the Oakland Inner Harbor even further north, ultimately spilling into the Middle Harbor (not far from the Bay Bridge), which will be the subject of Ride #8.

The MLK Regional Shoreline is the eastern edge of San Leandro Bay and a favorite stopover in the fall for hundreds of thousands of ducks following the Pacific Flyway from British Columbia to Mexico and South America.  Ducks stopping over include Northern shovelers, mallards, American wigeons, and pintails.

Arrowhead Marsh is the shape of an arrowhead and points into the center of San Leandro Bay.  A map tacked to an information board shows why it has earned its name (you can see a high resolution shot of the map here ).  You can also see the arrowhead shape on Bay Trail Map 9.  There is a boardwalk that extends out over the water near the marsh with an observation tower further up the trail.

At the beginning of the boardwalk, visible to the right is a narrow path of water trickling through a field of pickleweed, where a bird watcher pointed out a Ridgway’s Rail (formerly called a Clapper rail ).  It was clear the bird lived there, moving sticks and mud as though it were building something.  These birds are endangered and rarely seen; it was an amazing sighting.  I’m including a shot of one of these Rails that I got a few years back during an airboat survey with biologists from the Don Edwards San Francisco Bay Wildlife Refuge at the Fremont Refuge during a January King tide.

Not far from the boardwalk and further up the trail, on the other side, is a grassy area with a metal sculpture showing the changing angle of the sun through the seasons of the year depending on how the sun hits two “duplex cones” created by Roger Berry in 1982.  The edges of the two cones are tilted so they are parallel to the equator and their axis parallel to true North.  As the information sign says, four times a year the sun and shadows on the cones mark the day each season begins (high resolution shot of the diagram is here).

Continuing further up the trail, one reaches a pedestrian/bike bridge crossing the water.  One can continue along a spur to the right, going along the San Leandro Creek for just under a mile.  The spur, San Leandro Creek Trail West, ends at Hegenberger Road, for those familiar with the roads near the Oakland Airport.  My first thought was to return by way of the other side of the Creek.  However, quite a number of motor homes of the homeless are parked along that side, with accumulations of trash for a half a mile or so, covering where a riding path should be.

At the north end of the MLK Shoreline, not far beyond East Creek Slough, this section of the Bay Trail stops at the Tidewater Boating Center, part of the East Bay Regional Parks.  This was 8.55 miles on my ride.  I saw a great blue heron fishing here.  Across the water, along High Street and Fernside Boulevard on the residential Island of Alameda, sit a number of homes with their back entrances leading down to docks in the water where small yachts are tied.

On the return trip, just before the trail crosses the footbridge over the East Creek Slough, I saw a large flock of marbled godwits feeding on tasty morsels exposed in the mudflats at low tide.

I stopped for lunch at the Arrowhead Marsh boardwalk, having covered over 11 miles by then.

I rode back the rest of the trip the way I came.  By the time I was approaching the Oyster Bay park, the sun came out and began to clear the dark clouds.

On this trip, I traveled an average of 7.6 mph.  My round trip back to the car was 15.83 miles.  The total odometer readings on my bike for these trail rides has reached 112 miles.  A friend pointed out that these return trips to get back to my car will result in my riding far more than the 350 miles of the completed Bay Trail once I’ve covered all the Bay Trail currently accessible.  We’ll see! 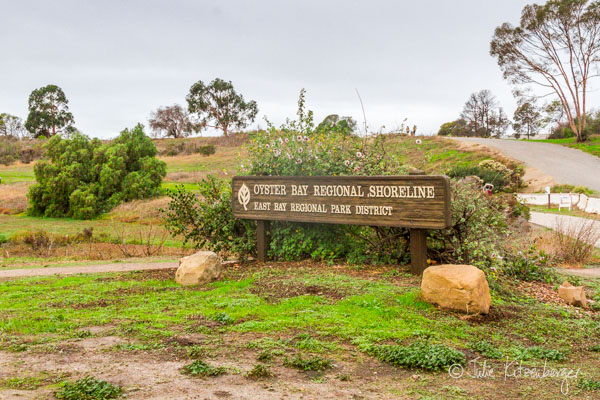 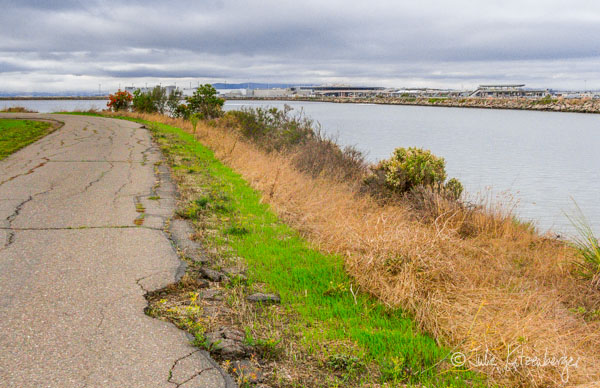 The edge of the Oakland International Airport 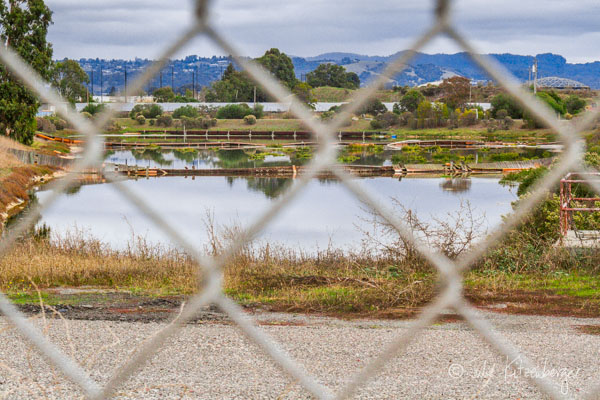 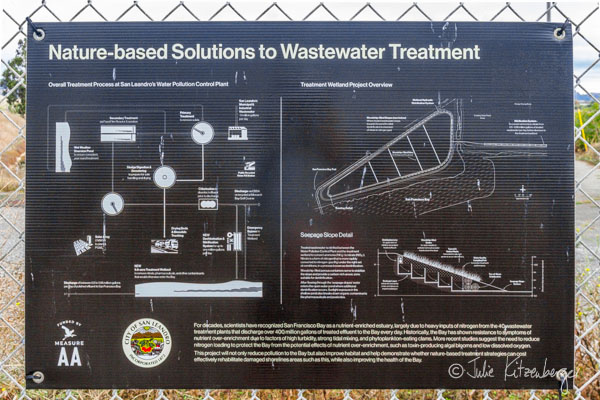 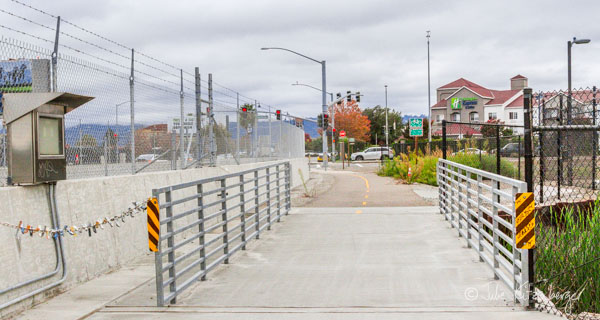 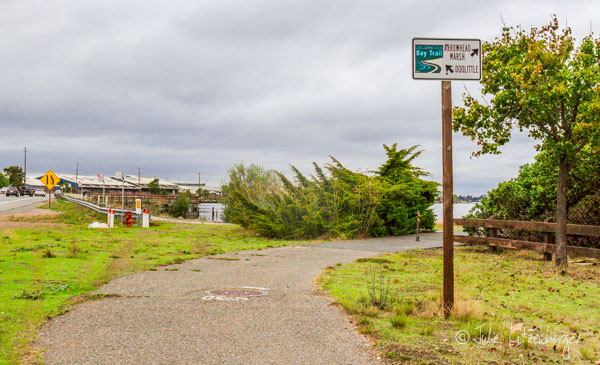 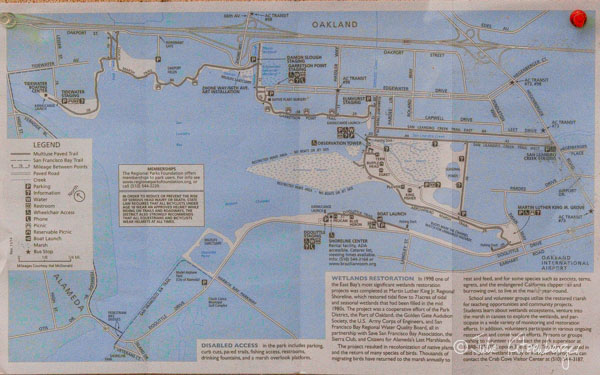 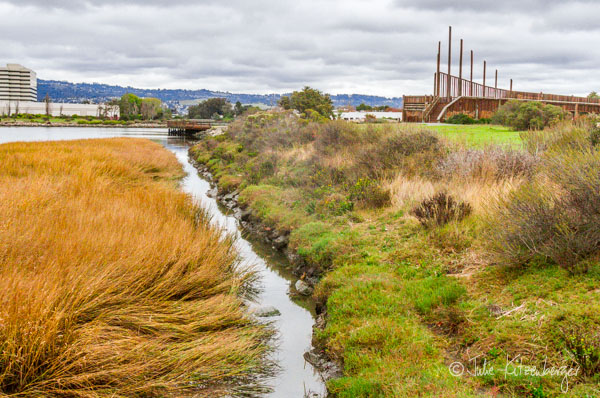 The narrow water path where a Ridgway’s Rail lives. 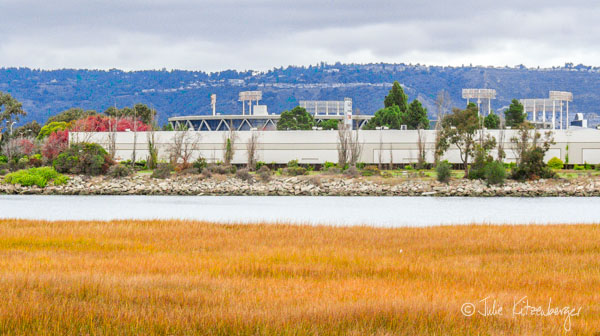 The top of the Oakland Arena, former home of the Golden State Warriors 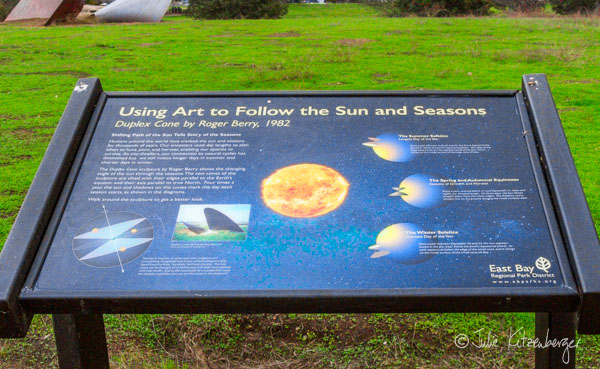 The information sign explains how the cones mark the seasons. 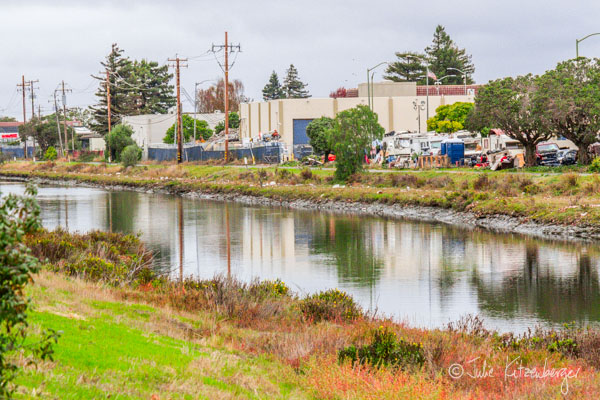 A number of motor homes along San Leandro Creek 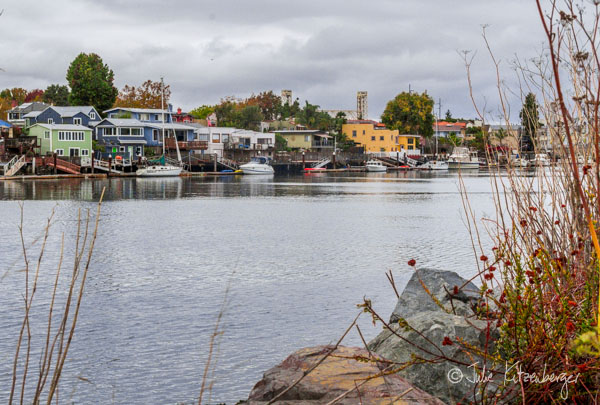 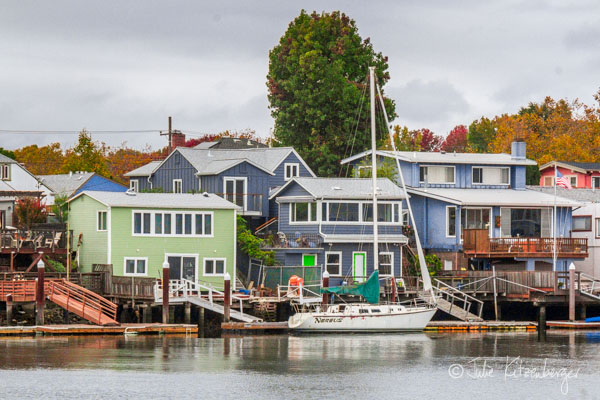 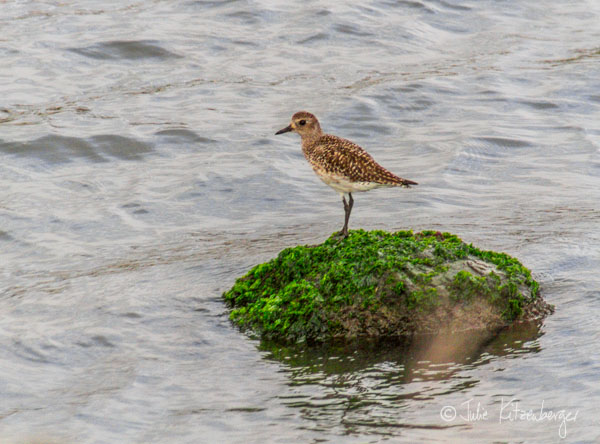 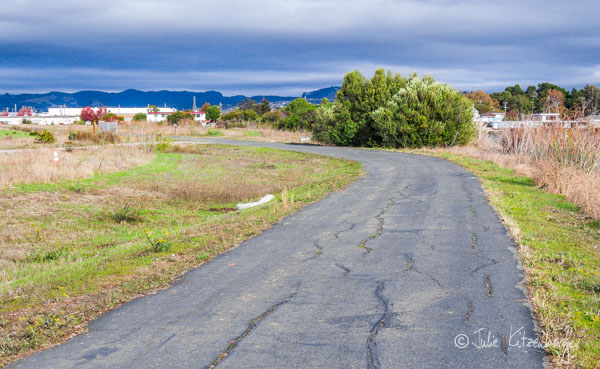 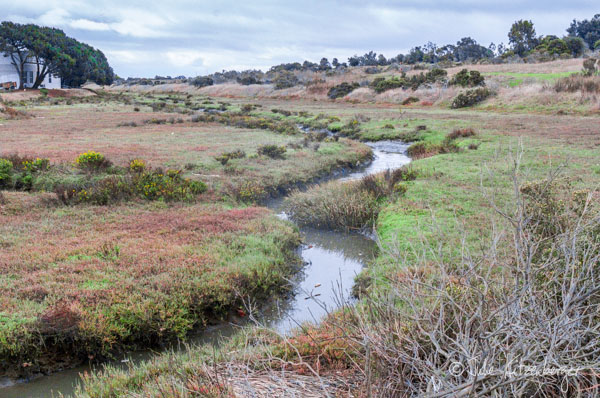 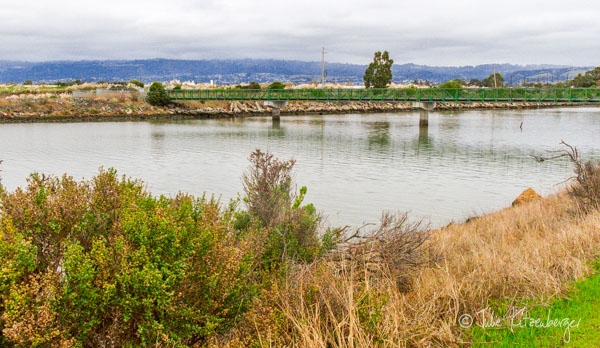 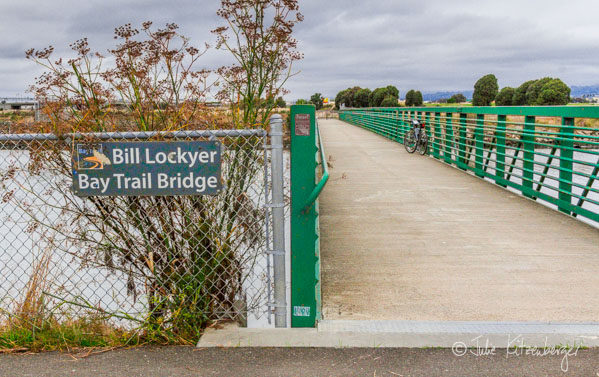 Above are 2 images of the Bill Lockyer Bay Trail Bridge 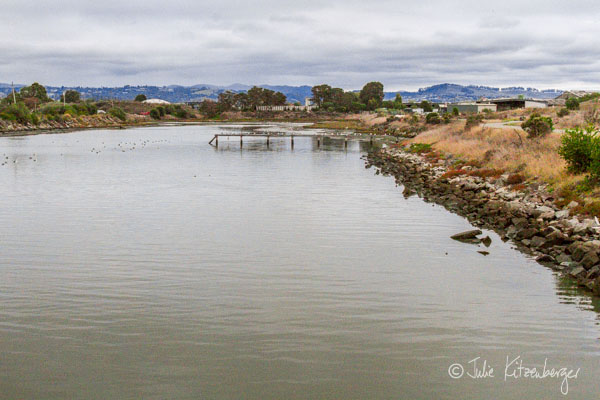 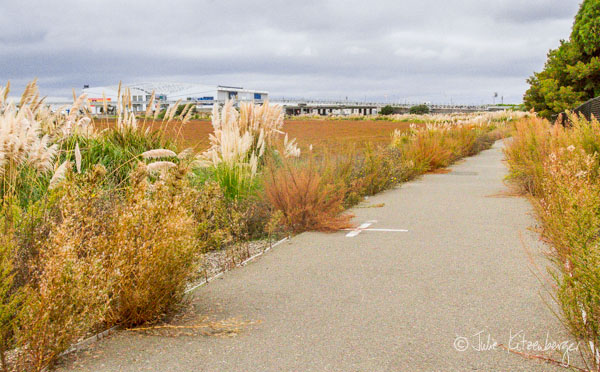 The trail behind the Oakland airport, bordered by tall pampas and other grasses 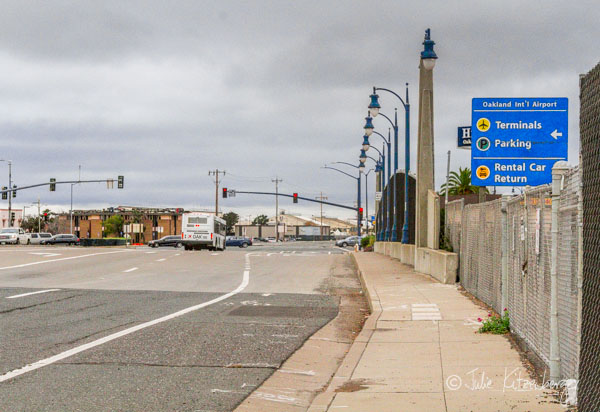 I chose to walk my bike along the pedestrian walkway. 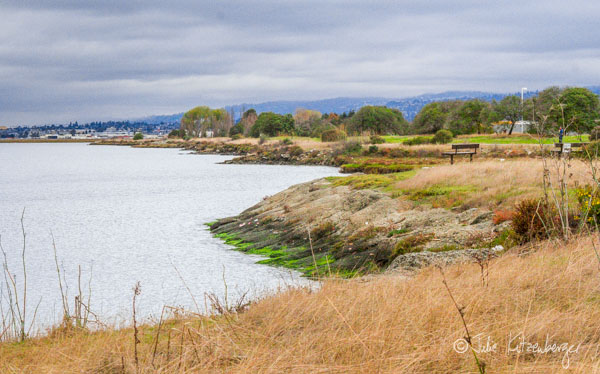 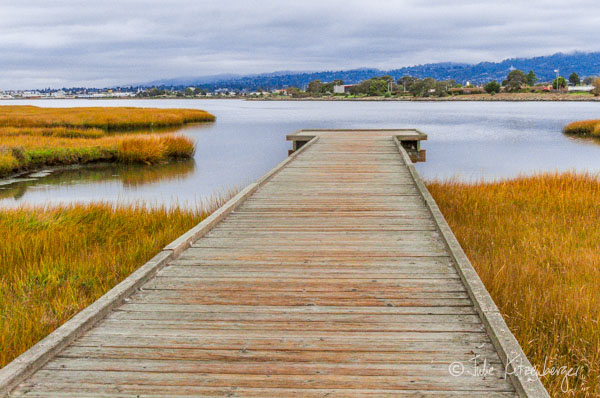 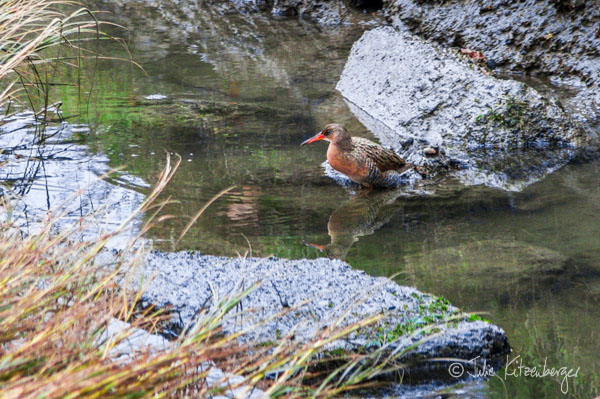 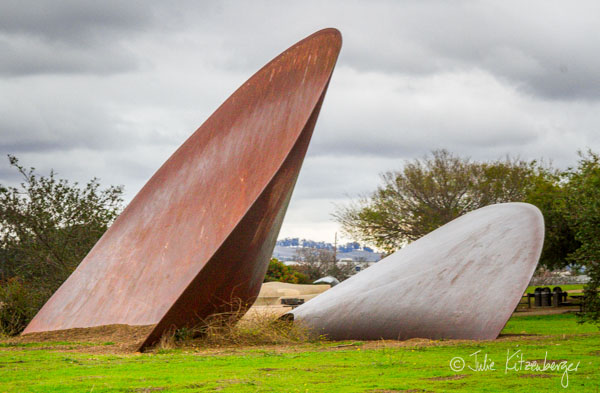 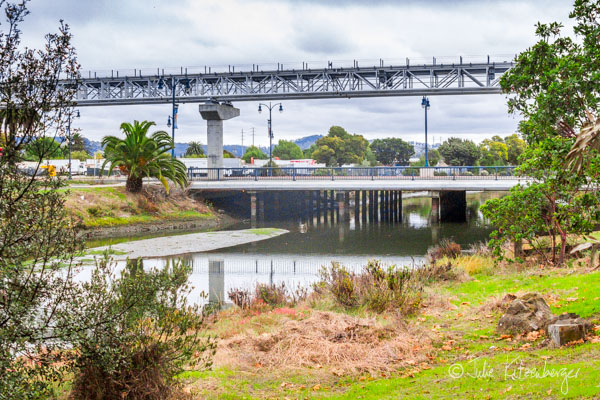 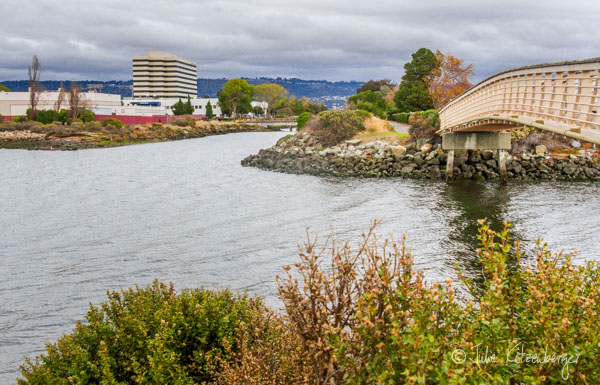 Cross a pedestrian/bike bridge to continue along the MLK Shoreline. 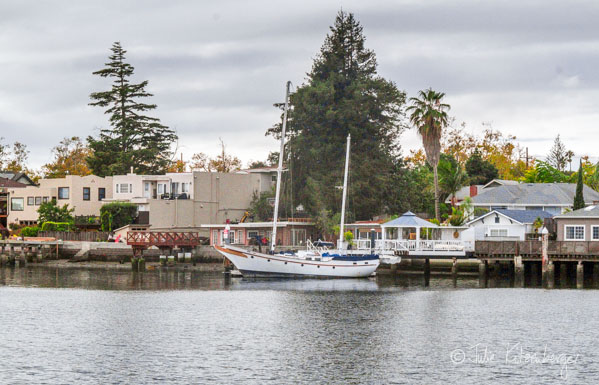 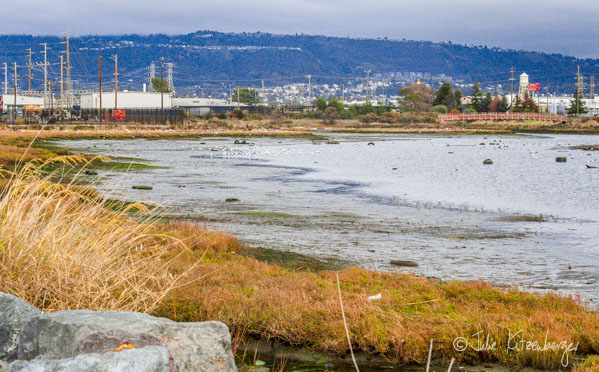 A large flock of marbled godwits  at low tide. 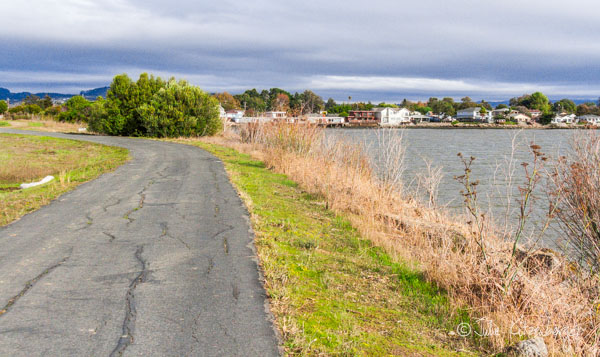 By the time I was approaching the Oyster Bay park, the sun came out and began to clear the dark clouds.