[You can see all these images, plus more, in high resolution: here ]

This is my fifth bike ride on my quest to travel 350 of the 500 miles of the S.F. Bay Trail completed so far, continuing north on the east side of the Bay.

The directions to this location on Bay Trail’s Map 8 need to be updated. One can no longer reach the Eden Landing Ecological Reserve off Dune Circle near the Gordon Oliver Eden Shores Park.  A gated community has been built with a locked gate, interrupting the trail.  When planning your trip, ask Google Maps to find the intersection of Arden Road and Eden Landing Road. Take the Clawiter Rd/Eden Landing Road exit from Highway 92, and go south of the highway on Eden Landing Road. Continuing west on Eden Landing Road brings you to a tiny parking area and the start of this section of the Bay Trail.

The loop here is about 4 miles around former salt evaporation ponds, including 1.8 miles to the Marsh Viewing Point.  Take the circle twice for a nice work-out.  Add a ride along the “Bay Trail Spine,” a trail spur that heads south along the edge of the wetlands for about 2 miles, ending at the gated community.  Heading north on the trail spur for 0.6 miles brings you to a pedestrian/bike walkway over traffic headed for the San Mateo Bridge toll plaza.

Near the start of the trail loop is a kayak and canoe launch (paddle craft only) into Mt. Eden Creek.  Boaters are warned that the “return route may become impassable at low tide.”

The Eden Landing Reserve is part of the South Bay Salt Pond Restoration project.  This area is an outdoor museum sharing the history of the salt production industry, with remnants of early salt production done by the Oliver Salt Company (sold to Leslie Salt in 1932) and details of the stages of salt pond restoration going on today.  There are information plaques posted frequently along the trail, all worth reading.  One plaque states, “Ironically, the Bay Area’s long history of salt production resulted in the preservation of thousands of undeveloped acres that can now be restored to tidal wetlands.”

I was fascinated by the remnants of wooden, wind-powered Archimedes screw pumps, a type of spiral pump used to move water.  The best example of this type of pump, still completely intact, can be seen on the Bay Trail a half mile north of the Hayward Shoreline Interpretive Center (also Map 8).  Andrew Oliver built some of these pumps to move salt water out of the Bay into his evaporation ponds as well as in and out of various ponds.  After the water evaporated, workers gathered the salt into pillars by hand.

I have been a volunteer photographer for the Don Edwards Wildlife Refuge for over twenty years.  My first cover photo was for “Saline Solution,” a story about the Salt Pond Restoration Project in The Sunnyvale Sun in 2004 (see page 2 for the story).  Even with all this exposure to the Restoration project, I learned many new things on this trip.

One new learning was about an effort going on to evaluate in which levels of salinity wild birds flourish most.  One sign says, “This experiment uses the historic salt-making process of moving sea water through a series of evaporation ponds to slowly increase the saltiness of the water.”

Another thing I learned is that microorganisms like different salinity levels and determine the color of the water of the ponds.  The Bay’s blue color is the lowest salinity; then comes green, then yellow, with red the highest level.

Signs along the trail remind us of the benefits tidal wetlands provide:  nurseries for the fish we eat; pollution filtration; buffers against storms, tidal surges, and rising sea level; critical habitat for wildlife.

This was an easier ride than some:  unusually warm for October, no wind, and a fairly short ride.  With all the fascinating information and historic artefacts, this ride was worth its weight in salt.  Total ride distance, including spurs:  9.7 miles.  My next ride will begin on the northeast side of the San Mateo Bridge, along the Hayward Shoreline Marsh. 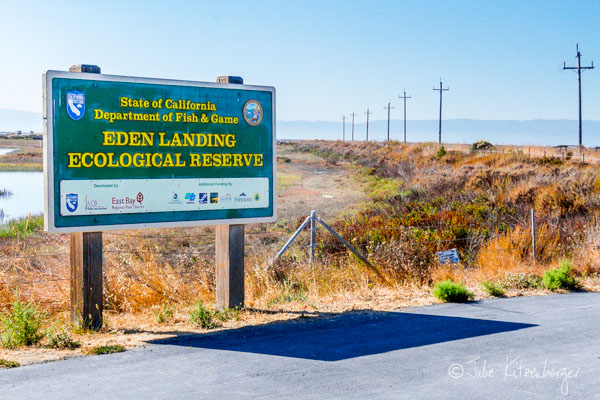 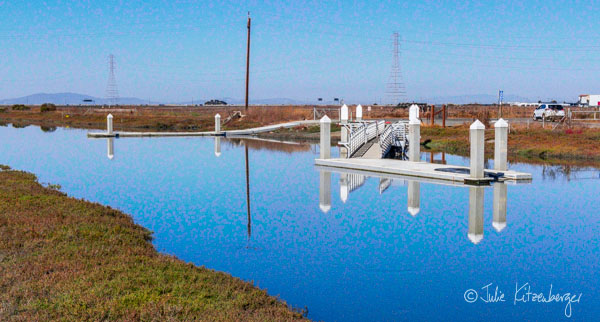 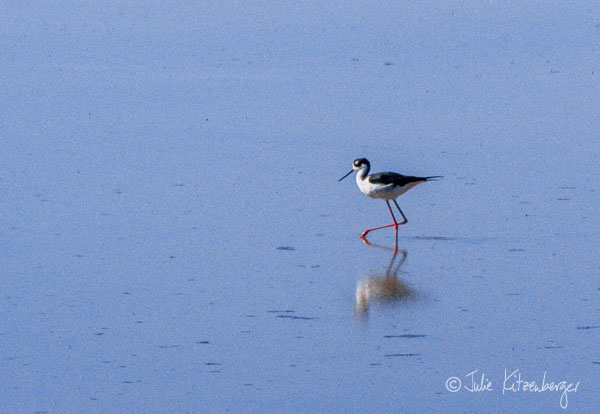 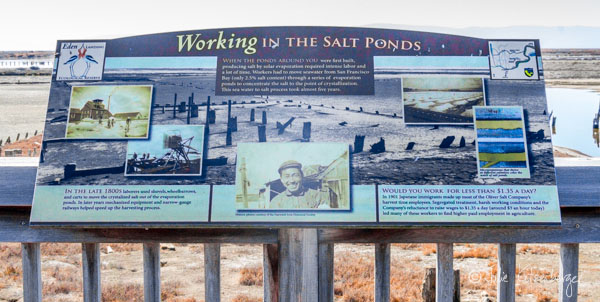 Story about the Japanese workers in the early 1900’s 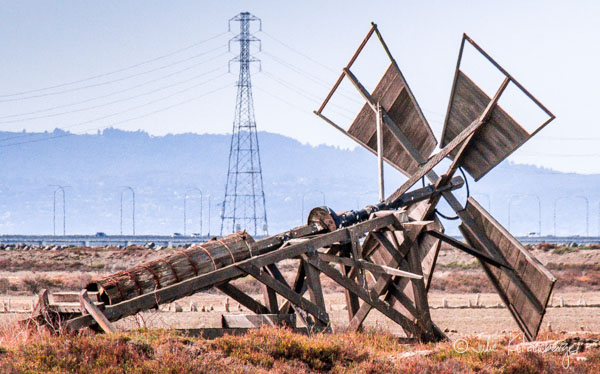 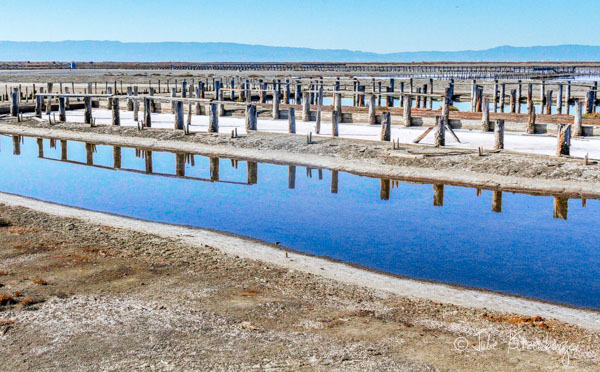 Left-overs of the salt production industry 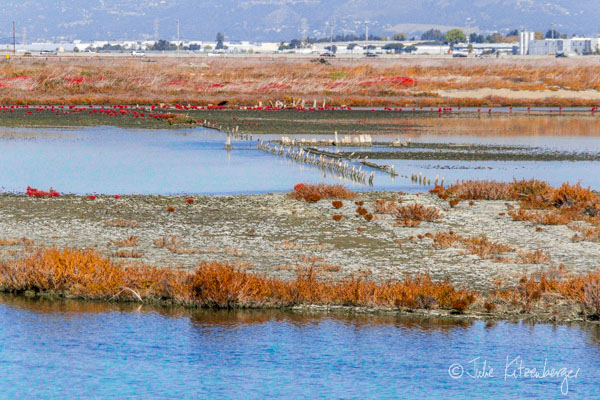 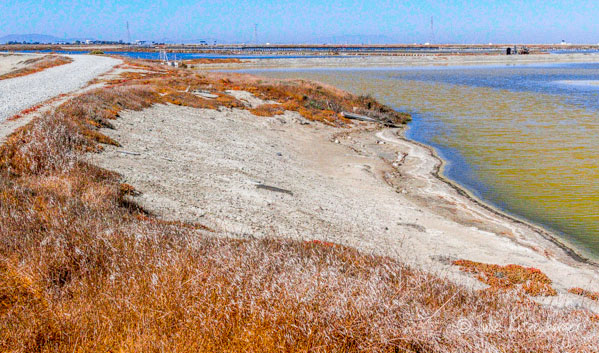 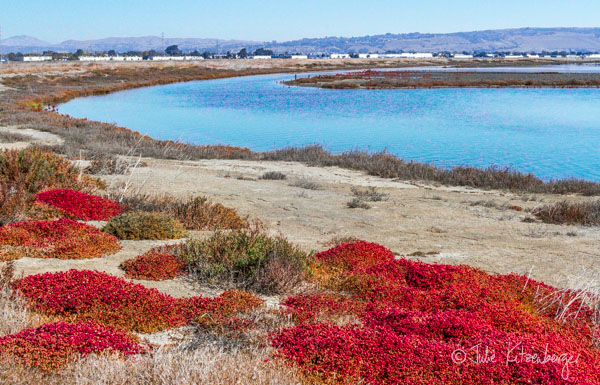 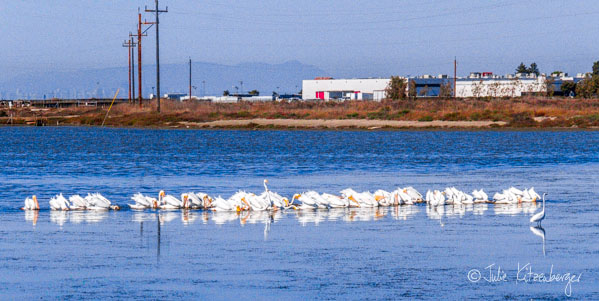 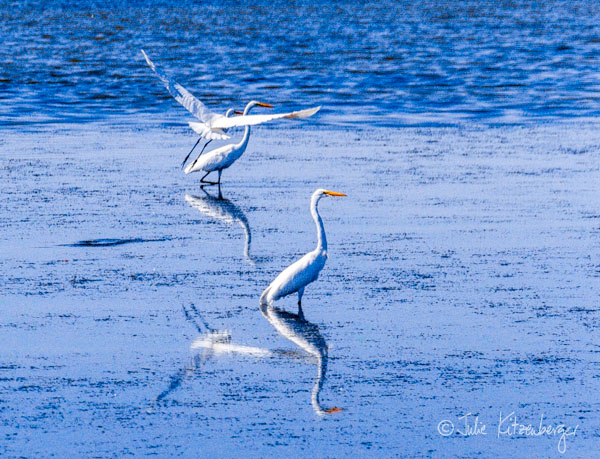 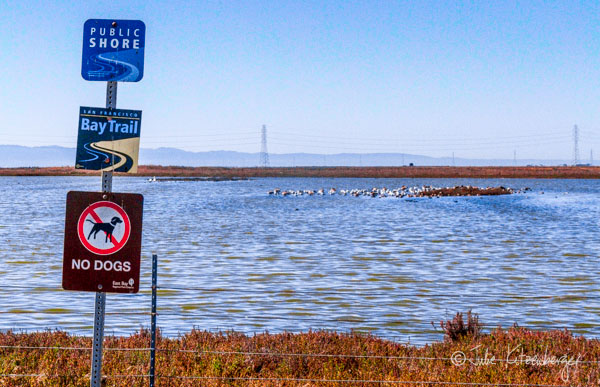 Near the end of the trail spur 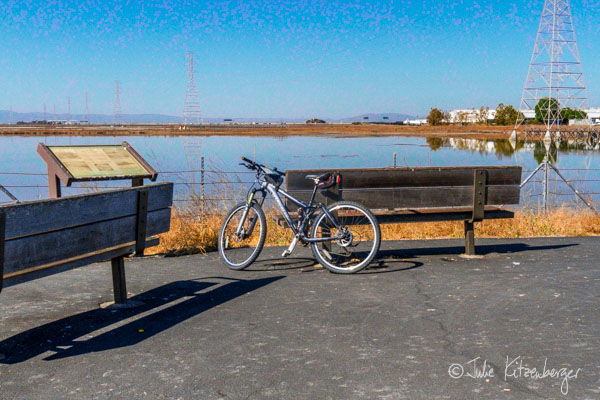 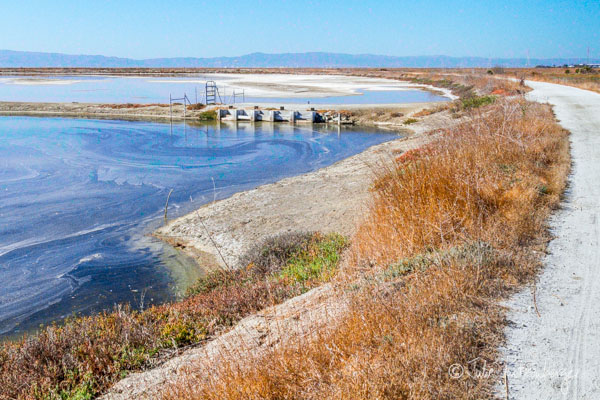 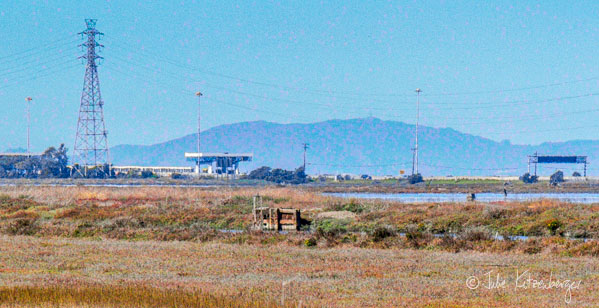 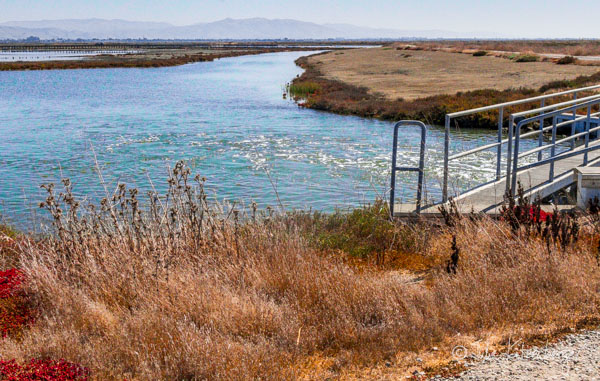 Water management for the various ponds 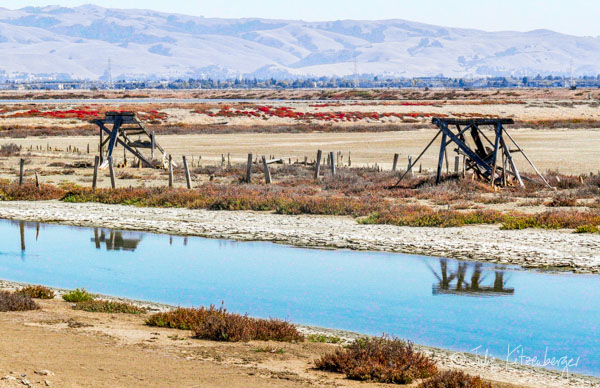 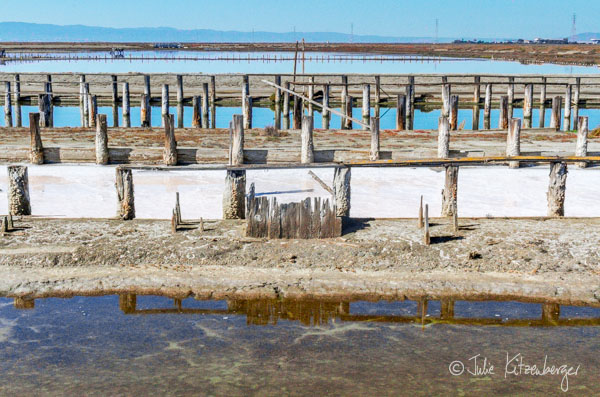 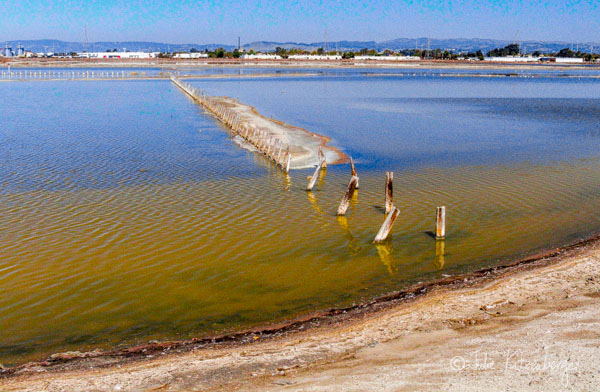 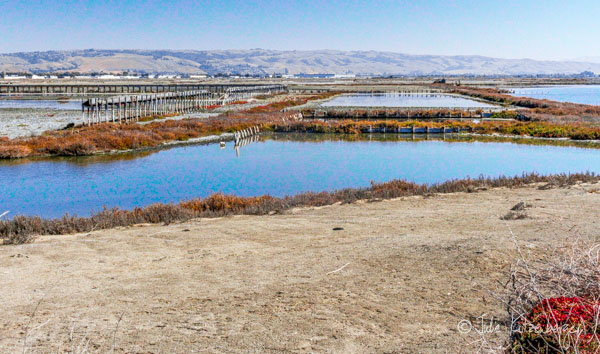 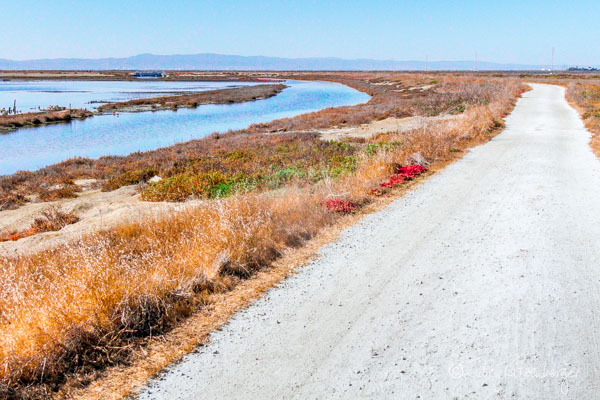 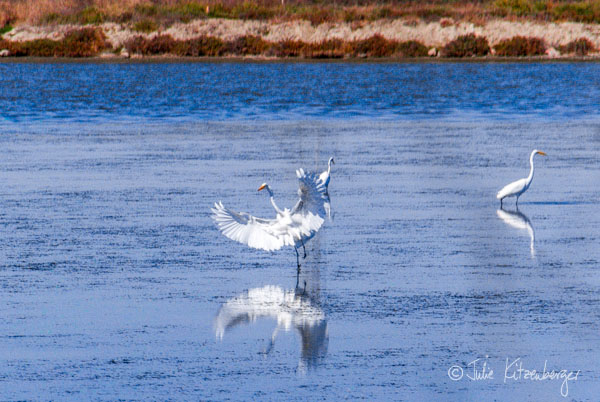 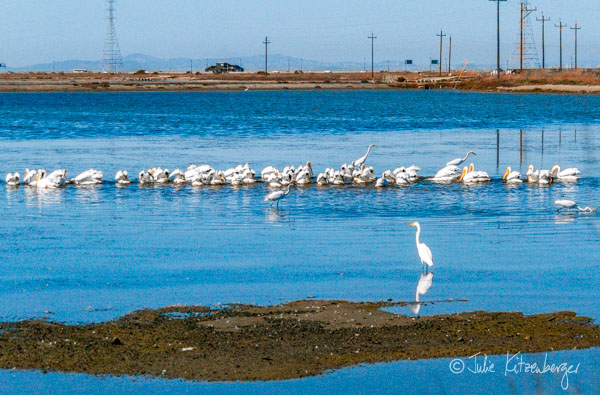 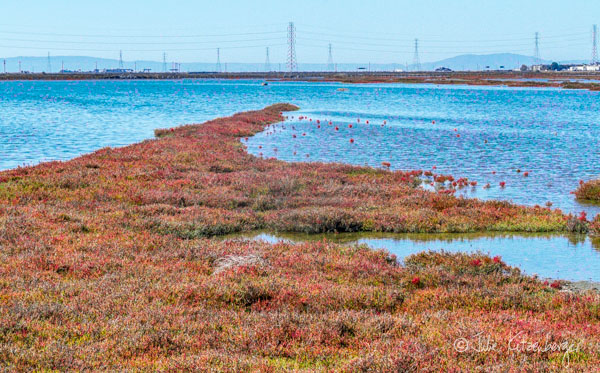