The Bay Trail is our walking/biking path around the San Francisco Bay.  It will be 500 miles long when complete.

I’d just gotten my Trek Fuel mountain bike tuned up and was ready to hit the unpaved road.  I figure, if I ride 20 miles of the trail on most outings, I can cover all of the 350 miles currently available in 17 or 18 trips.

Map 7, Alviso, is closest to me, so I went there first.

I began by parking at the Don Edwards S.F. Bay National Wildlife Refuge Environmental Education Center, at the end of the road once you cross the RR tracks off of Grand Avenue in Alviso.  The 4.5 mile loop of unpaved trail takes you out on the levees to view the refuge marsh areas.  Small islands are resting spots for California brown pelicans, white American pelicans, white great and snowy egrets, and flocks of black and white stilts.

Railroad tracks for the ACE commuter train pass right next to the Refuge.  I decided to return on a weekday so I could see the train pass.  Only to hear a train whistle shortly thereafter!  In fact, before my day’s riding was complete, two Amtrak trains running the Capitol Corridor passed along with one more ACE train.

I’ve learned that one can cross the tracks (by the graffiti-adorned STOP sign) onto a second, 9-mile loop accessible from the Alviso Marina County Park.  Not sure where crossing the tracks would take me, I went back to the EEC, loaded my bike on the bike rack and drove to the marina to begin the second loop from there.

The air quality was green, the sky blue, the white clouds puffy and streaked.  And the wind blew like a gale!  Riding into the wind was brutal, slowing my bike cruising speed from 10 mph down to 5.  The good news is that the wind was at my back when I returned, helping me along when I was completely exhausted.

The wind blew through a gathering of white pelicans floating on the water, whipping their feathers as though by an egg beater, giving you an idea of how windy it was that day.

I rode with my camera hanging around my neck and over one shoulder and stopped frequently to document the views.

A couple sections of the Refuge near the Alviso marina – Ponds A12, A13 and A15 – are undergoing construction at the moment.  I’m told this is a federal project to protect Alviso from rising water levels.  The trail through that area is closed on weekdays whenever work crews are there but open on weekends.  There is a map that shows the plan.

Some portions of water in that area are reddish, ringed with white.  These are former salt ponds undergoing restoration to their former marshland status.  On the other side of some levees, the Bay water is more greenish blue, having been restored.  The water birds love it all.  And so did I. 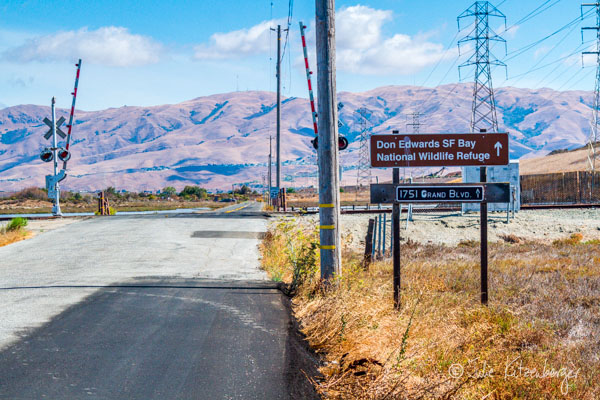 Cross the tracks to get to the refuge’s Environmental Education Center (EEC). 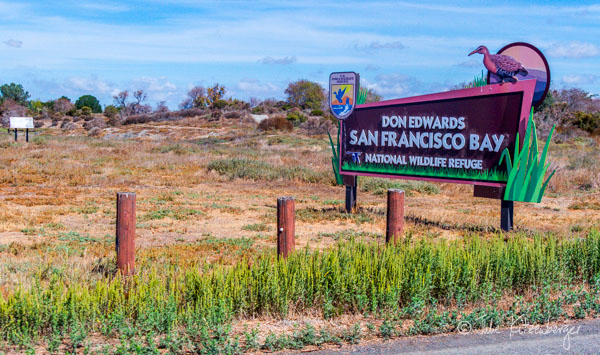 I’ve volunteered for the Refuge for over 20 years. 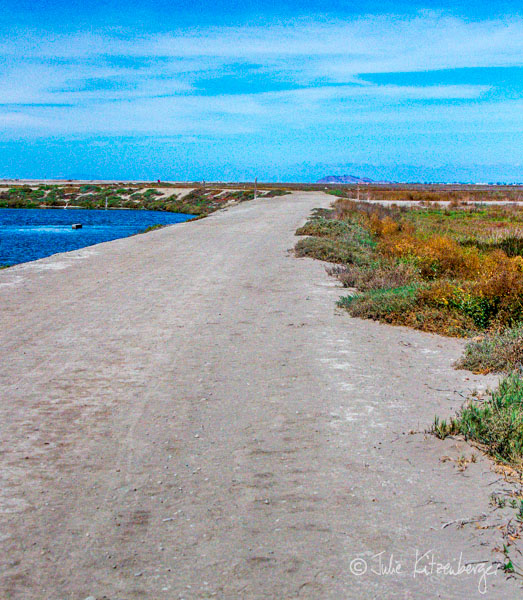 The trail on the levees. 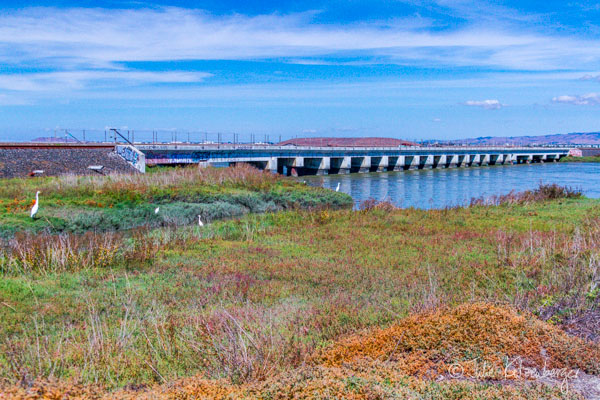 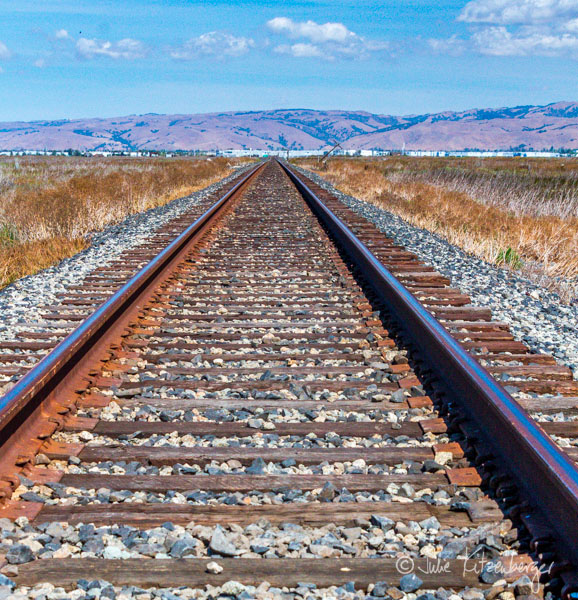 Be warned: trains come through frequently, even on Sundays. 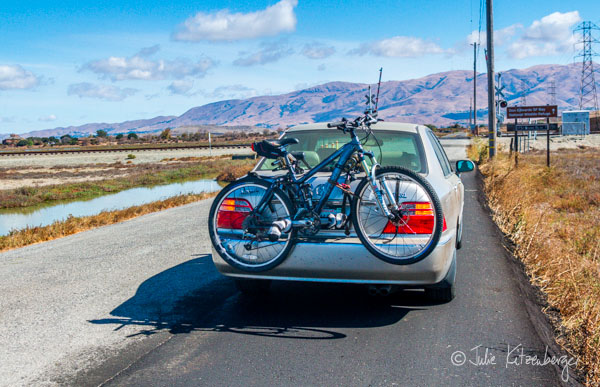 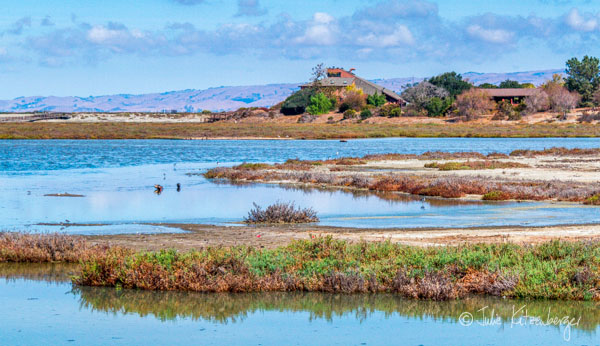 The EEC is the building across the water.  I’ll park next to it for access to the levees. 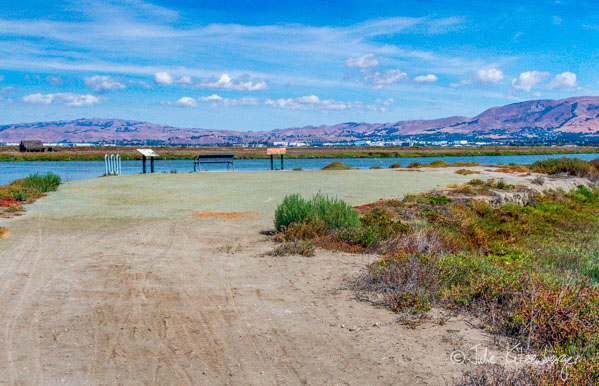 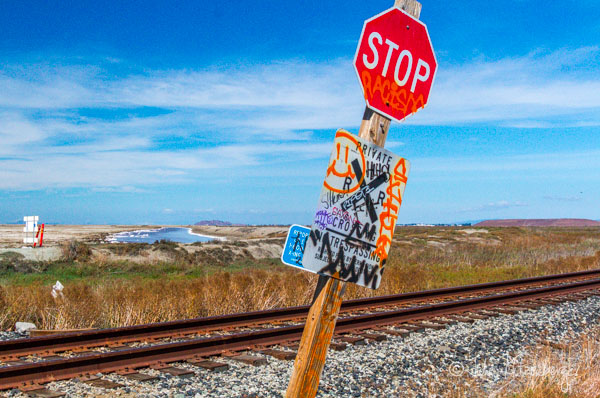 You can cross the tracks and ride the 9-mile loop that goes to the Alviso Marina County Park. 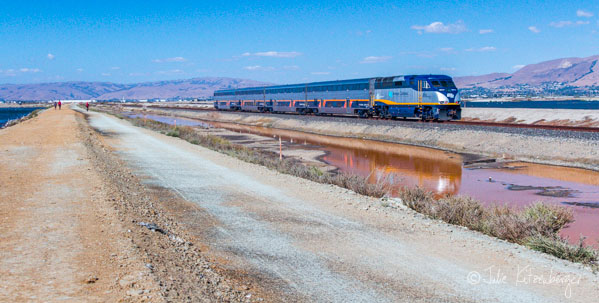 An Amtrak train on the Capitol Corridor, heading south to San Jose. 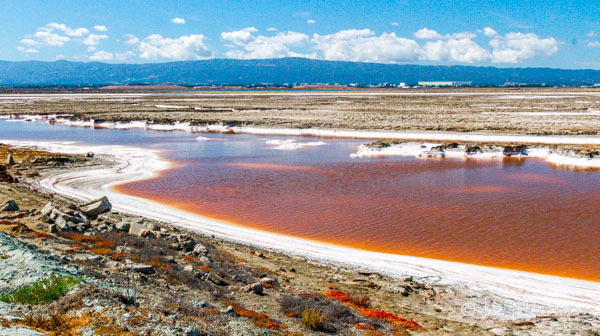 These are salt ponds being restored to bay water. 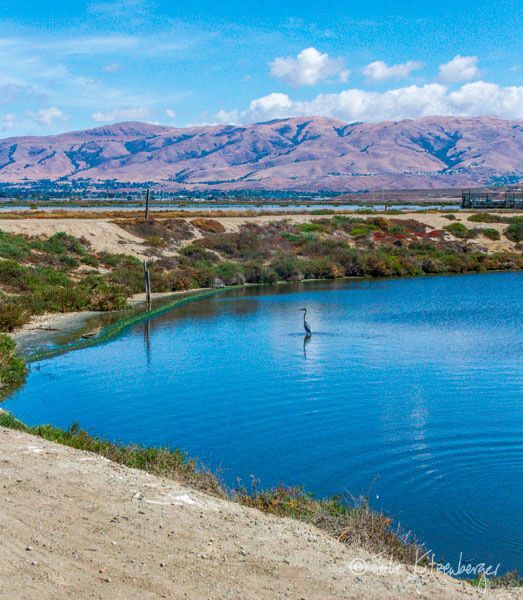 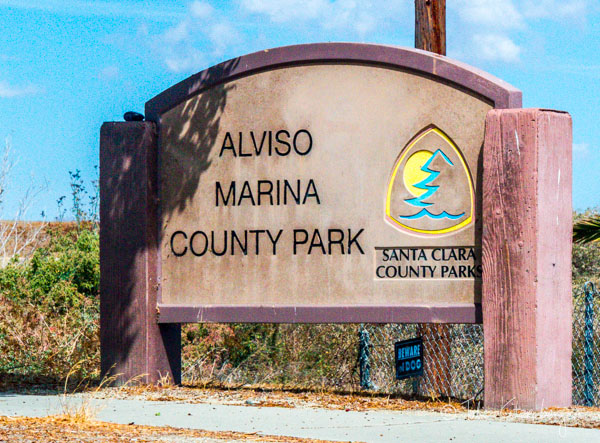 A strong wind made me feel a little uneasy riding on this levee. 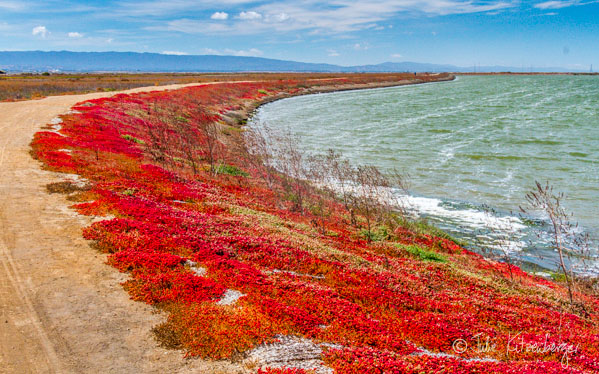 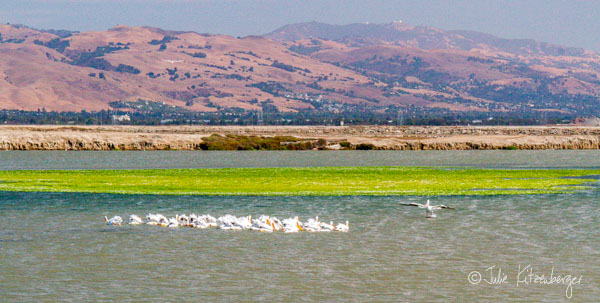 One American white pelican comes in for a landing – their black flight feathers only visible when they are aloft. 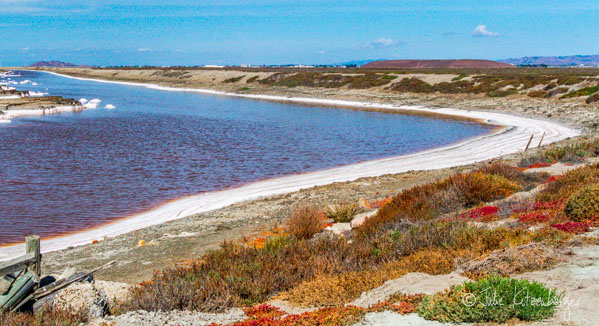 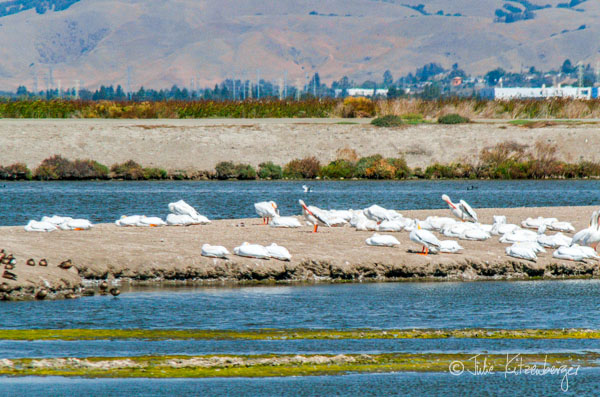 BELOW ARE IMAGES FROM THE 9-MILE LOOP USUALLY ACCESSED FROM THE ALVISO MARINA COUNTY PARK. 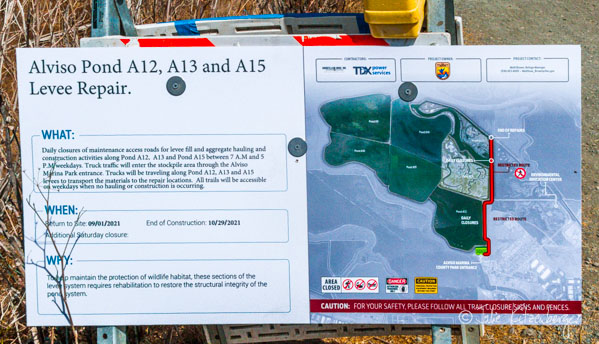 Map as of September 2021 showing portions of levee trail closed during the week. 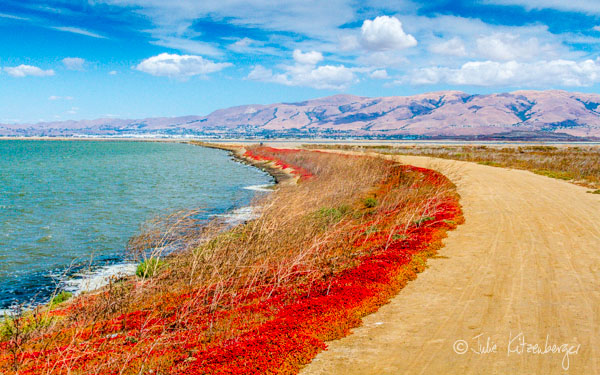 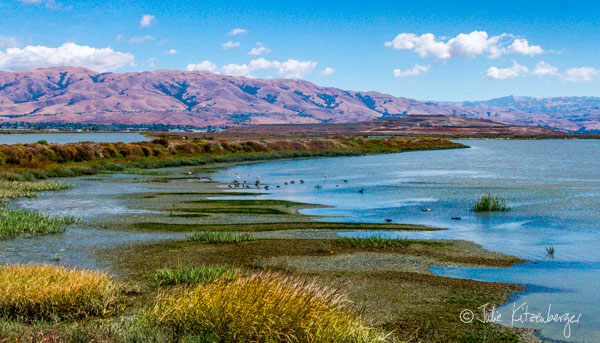 Amazing views from the levees. 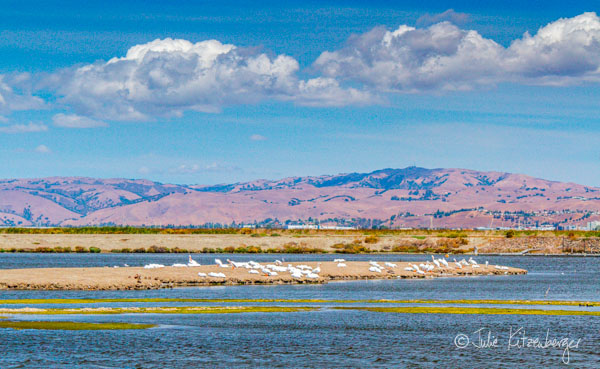 The pelicans gather on islands in the refuge waters. 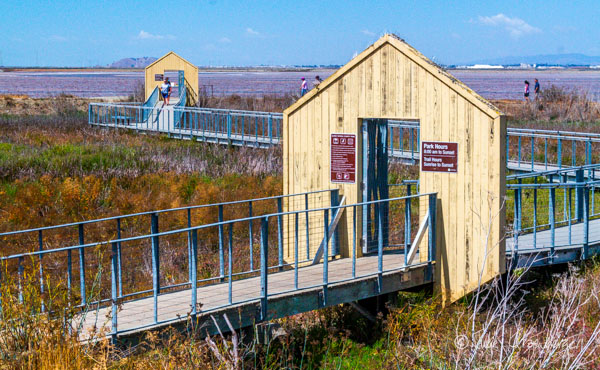 These walkways used to lead to docked boats. 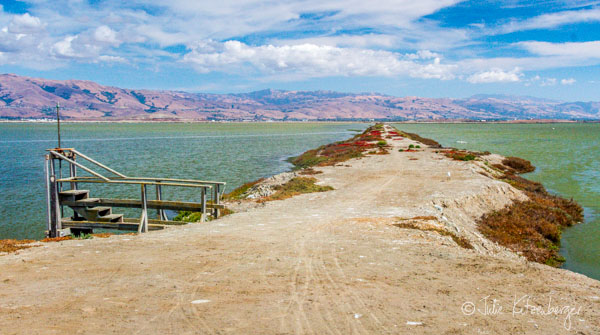 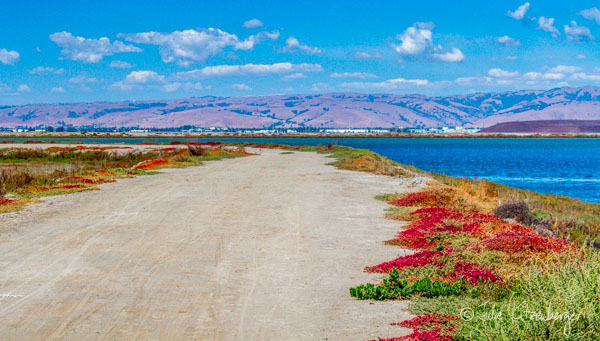 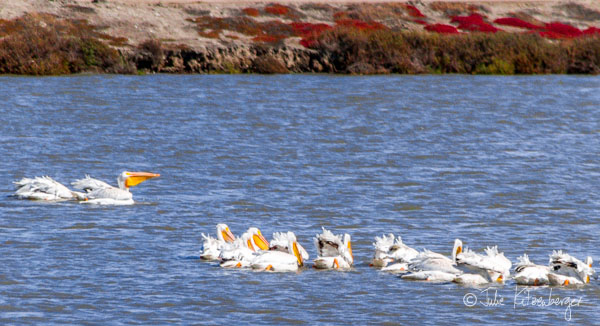 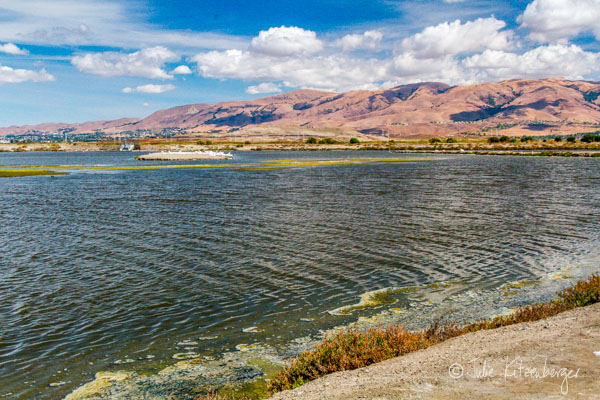 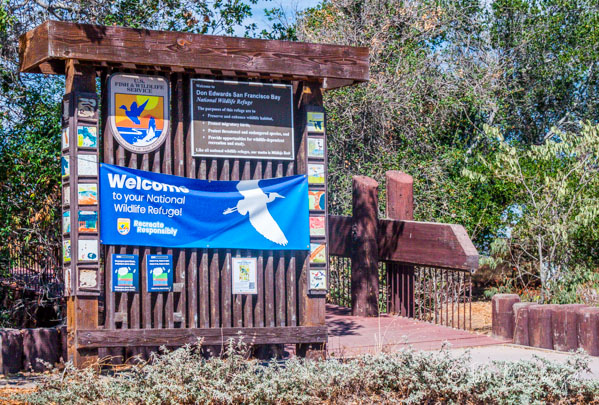 Entrance to the EEC. 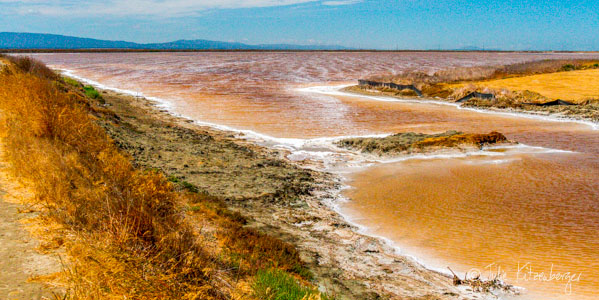 Seen at the beginning of the loop — salt ponds in the process of being restored to marshland.

The hill on the horizon is the location of the Fremont national wildlife refuge sloughs and levees. 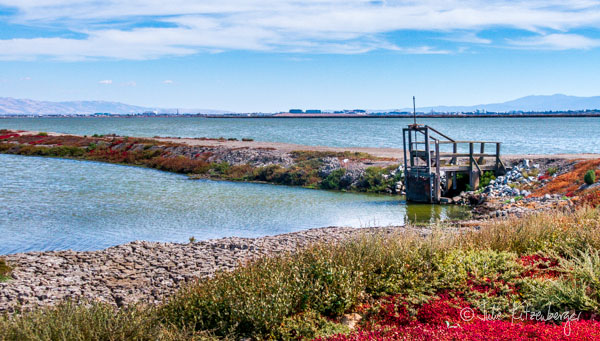 The pelicans dip into the water in unison.  Unlike California brown pelicans, they fish from the surface of the water instead of plunge-diving from the air.