On my quest to ride the complete S.F. Bay Trail (that is, once the 500 miles are completed), I followed Map 6 from the Sunnyvale Baylands Park for 14 miles north to the Eco Center, situated near the Palo Alto airport and just beyond the Palo Alto Baylands Nature Preserve.  This section of Map 6 is the next closest part of the trail for me.

The Sunnyvale Baylands Park charges $6 to park there.  The Sunday I went, the gatekeeper’s cabin was closed, so parking was free.  There is no gate at the Park to be locked after closing time.  I noticed later that many folks park along Caribbean Avenue instead.

Each section of the Bay Trail has its own personality and type of scenic views.  At the beginning of this ride there is a loop out on the levees that goes past some water treatment activities and along the Guadalupe Slough.  Then the trail is pretty much a straight line north, passing Moffet Field and the NASA Ames Research Center.  One can ride quite close to the orangish-red Moffett Field dual horn Radar ASR-9 Airport Surveillance Radar, utilized by the Federal Aviation Administration to monitor civilian and commercial air traffic within the United States.

Continuing north, just beyond the Shoreline amphitheater in Mountain View, one arrives at the Palo Alto Baylands.  The trail divides, and the unpaved portion curves east to Hooks Point and then back to Byxbee Park.  This was the loveliest part of this ride.

Continuing on to the EcoCenter, I discovered it is closed on the weekends but does open a few days during the week, despite Covid.  The building looks like it was converted from a large boat, with a white wooden porch and round windows like portholes.  Directly behind it, across some wetlands, is the Palo Alto airport.  I ate my lunch on a bench there and watched the private planes fight the wind as they passed over, coming in for a landing.  A line of white planes at the airport is visible across the marshlands – it looks like a row of white pelicans.  The white blimp I saw at the beginning of the ride near Moffett Field looked like a large white seabird as well.

Riding north means riding into the wind.  I’m glad I brought a windbreaker, because – although it was a gloriously sunny day — it never warmed up.  This is forming my strategy:  always ride north into the wind and return, when I’m worn out, with the wind at my back, pushing me home.

The American white pelicans are everywhere in September, joined by a few cormorants, Great egrets (white with black feet), smaller snowy egrets (white with yellow feet), at least one great blue heron, some stilts and avocets exploring the shorelines, and many brown ducks.

The American pelicans appear to be completely white until they fly, revealing black flight feathers.  One can also see the black feathers when they groom.  They don’t dive for fish from the air, the way California brown pelicans do.  Instead, they float on the water, dipping their beaks into the waves to catch fish.  They seem to dip in concert when in a group, which is fascinating to watch.

The pelicans were my escort all the way, handing off the honor from one group to the next as I progressed along the trail.

Next ride I’ll start just beyond the EcoCenter and continue north to the Dumbarton Bridge.  This section of the trail is still on Map 6, at the top.  The map indicates one can ride across the bridge, which will no doubt be a windy affair.  I can’t wait!

Note for Mom:  Special thanks to my Mom for the early Christmas gift of a box of 25 Bay Trail map cards (including a single, fold-out map of the entire Bay Trail) which she found at Berkeley’s Ecology Center. Scroll to the bottom of the website for other locations. 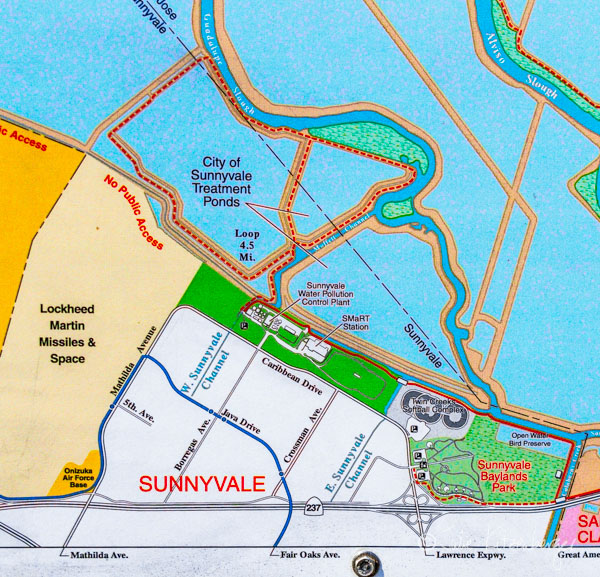 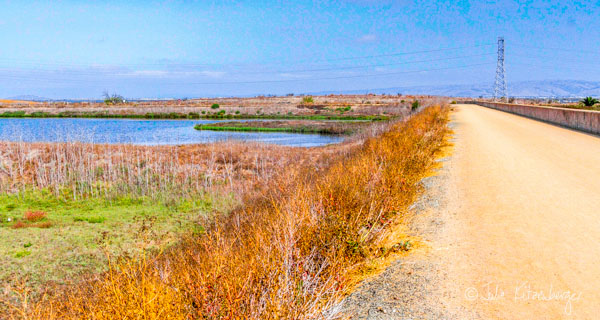 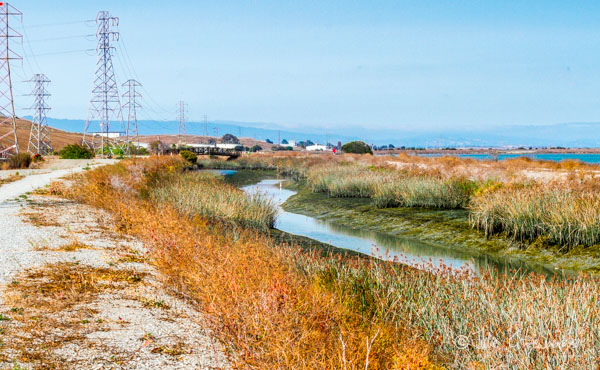 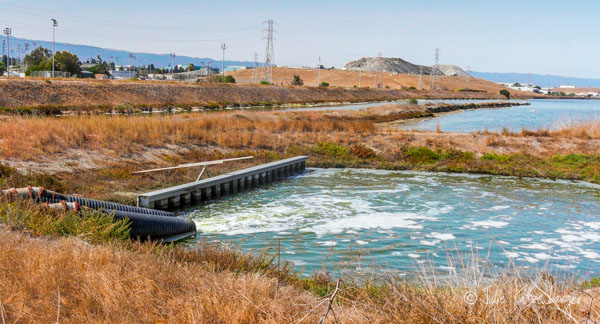 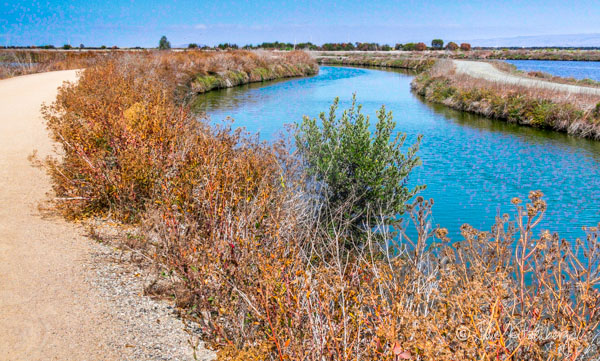 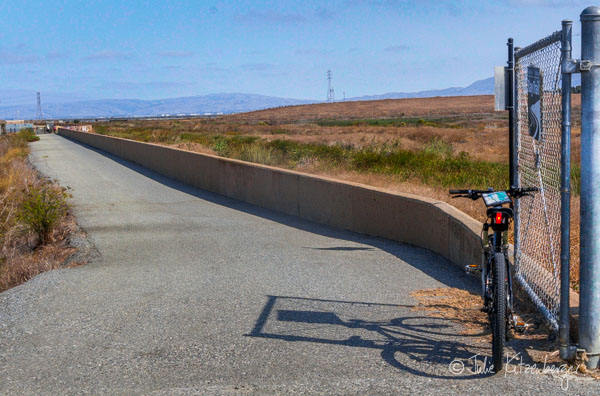 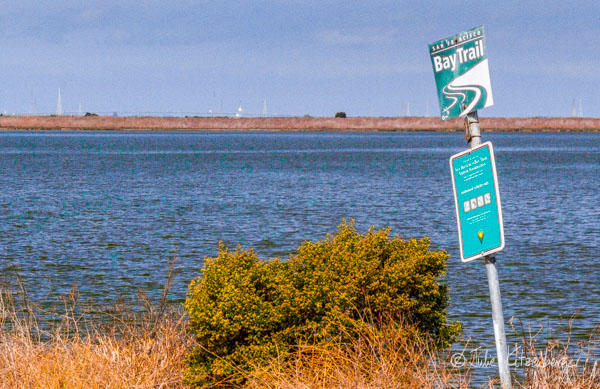 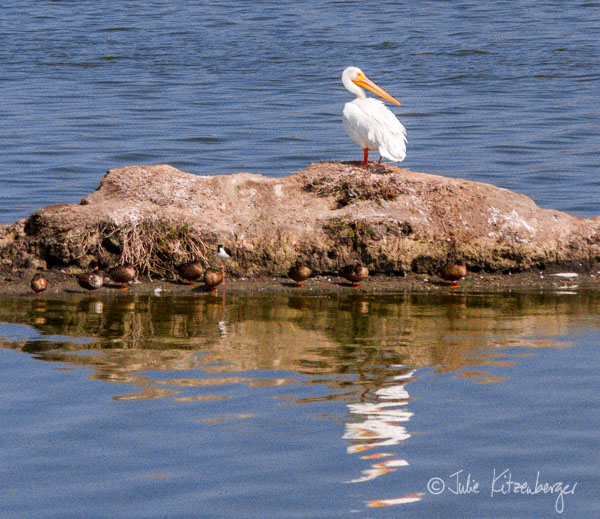 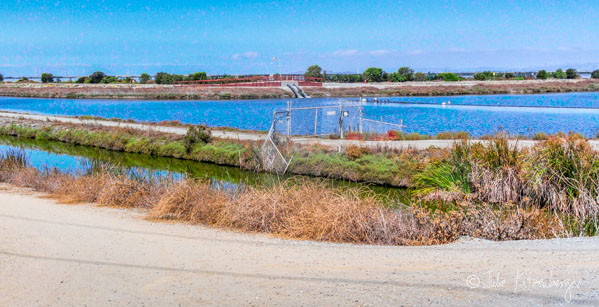 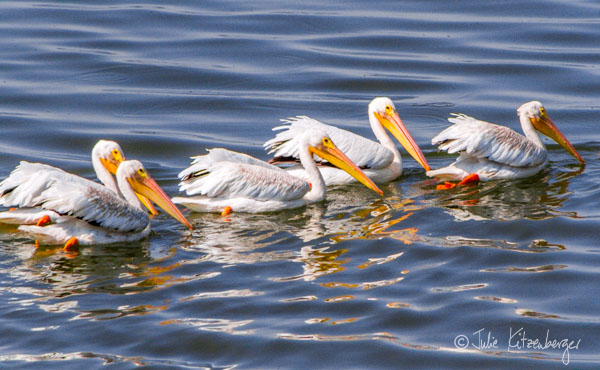 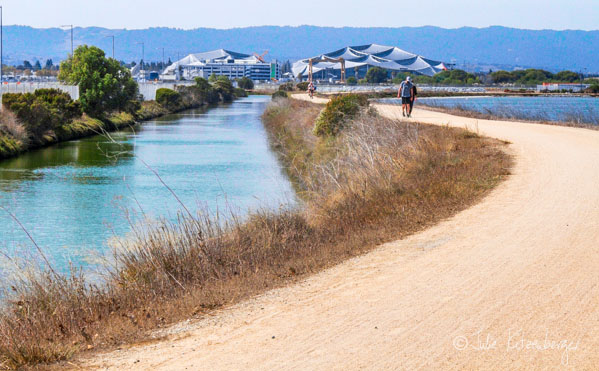 Moffett Field in the distance.  The trail passes right by. 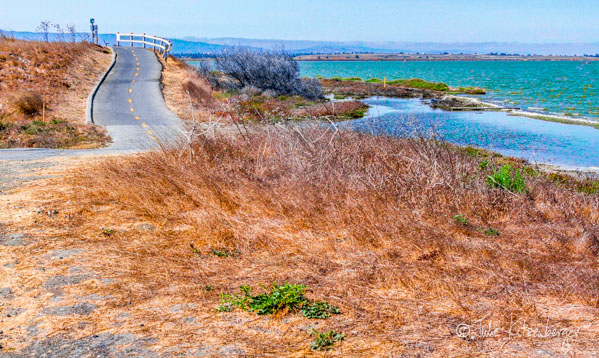 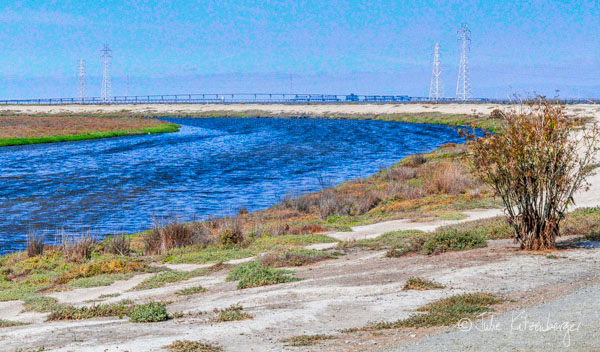 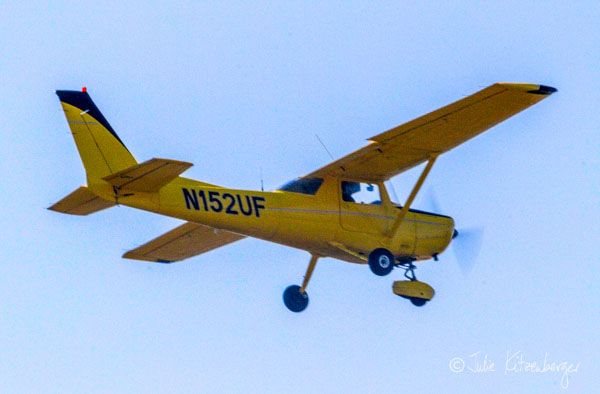 As I sat eating my lunch, private planes kept flying overhead, coming in for a landing at the airport behind me. 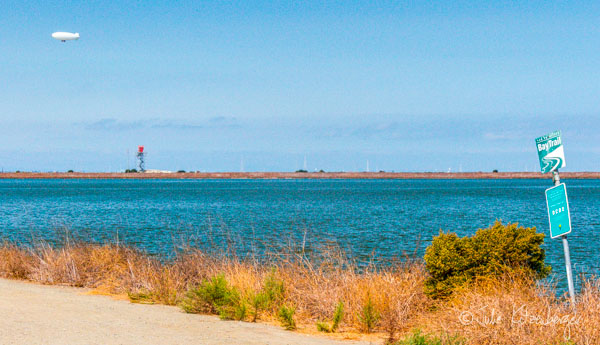 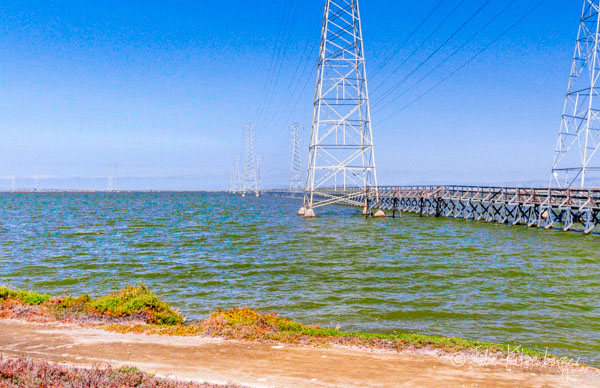 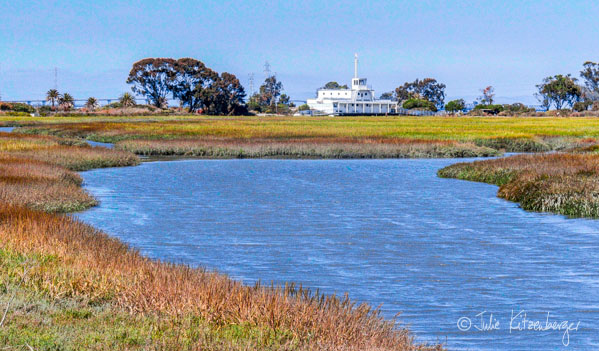 The EcoCenter beyond the Palo Alto Baylands

The pilots had to buck quite a headwind that day. 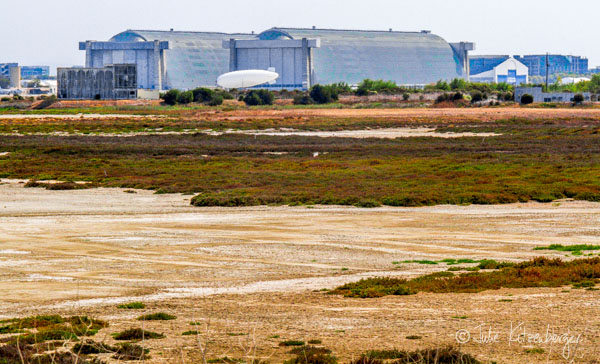 The home of the white blimp. 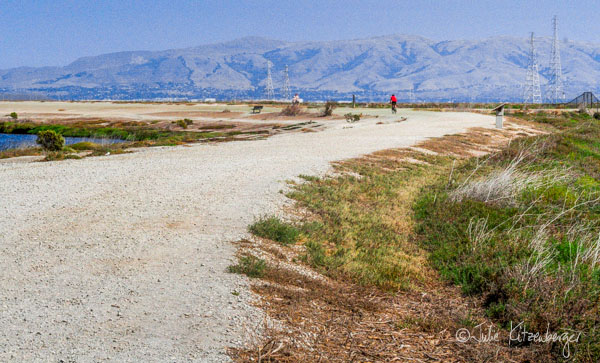 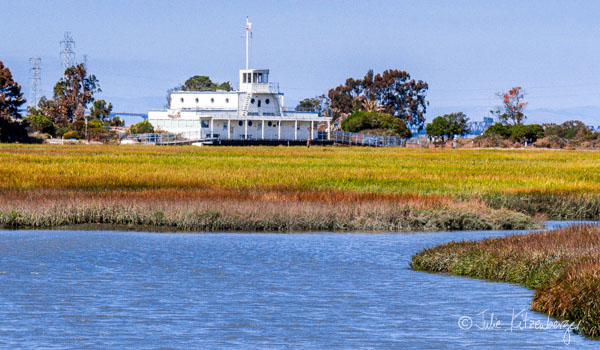 The EcoCenter looks like it was once a ship, with portholes for windows.  I ate lunch on a bench near there. 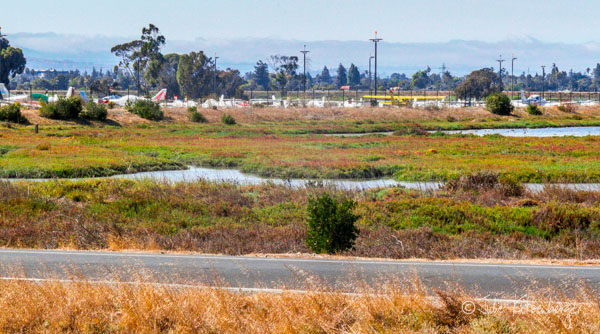 The Palo Alto airport is just beyond the EcoCenter, separated only by some narrow marshlands. 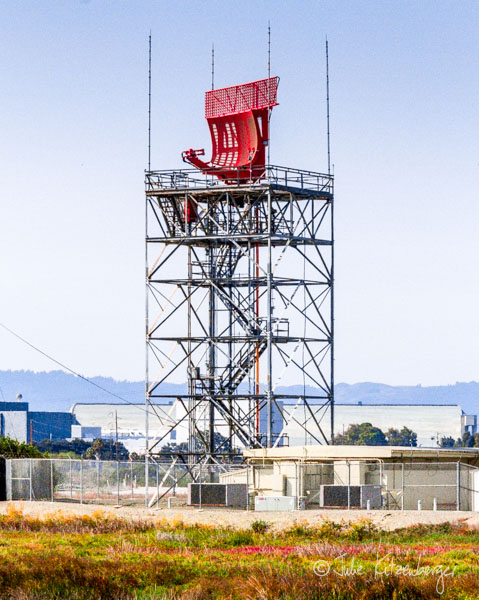 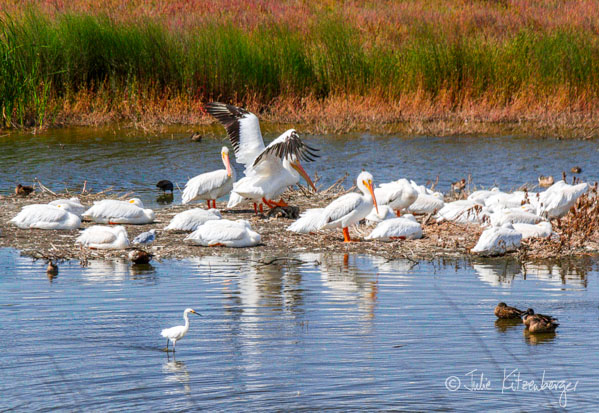 The American pelican’s black tail feathers only show when they are aloft. 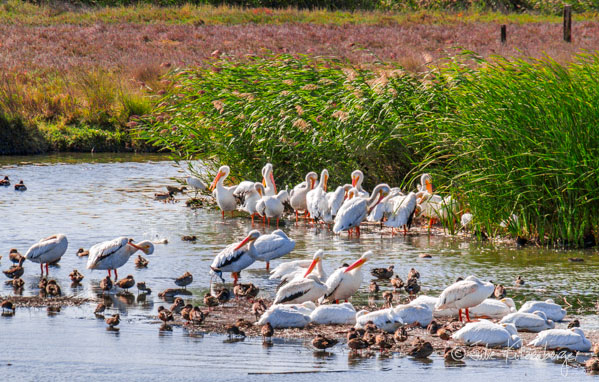 The Palo Alto Baylands seem like a favorite spot for the American white pelicans and other water birds. 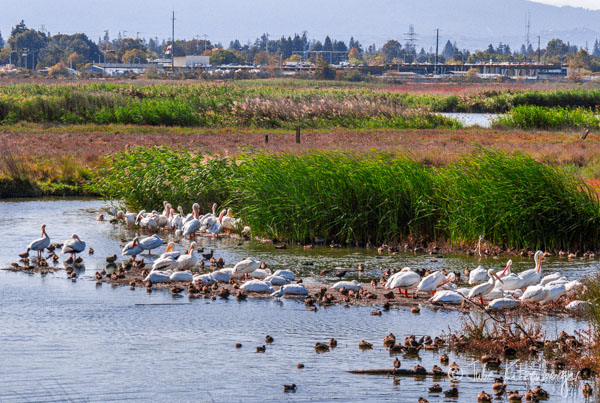