This is my third bike ride on my quest to travel 350 of the 500 miles of the San Francisco Bay Trail completed so far.

I am very careful securing my bike on the bike rack strapped to 4 sides of the trunk of my car, so that what happened to someone else (see “Note on Bike Racks” at the end of this blog) doesn’t happen to me.

This time I continued north along the west side of the Bay, following the top portion of Map 6 from the Lucy Evans Baylands Nature Interpretive Center (.4 miles up the road from the EcoCenter I visited last time).  There is a parking lot there, with a sign warning that the gate is closed and locked about 7 p.m.

The air quality was worse than I anticipated with haze from wildfire smoke and who knows what else impairing the scenic shots I was hoping for.  It was warmer than I expected so close to the Bay, and my windbreaker remained packed.

The Lucy Evans Center is closed until further notice due to Covid.  One can walk behind the building to a boardwalk that extends out into the Bay.  From the Center, I rode north passing the Duck Pond on my left.  There were many black-and-white stilts there floating in groups, with some avocets, a few white Great egrets and snowy egrets standing like statues, stalking fish nearby.  I saw only one American white pelican on this section of the trail.

The narrow unpaved path passes Sand Point on the right and the Palo Alto Airport on the left.  A fan of small planes can get some great photos here.  The path winds to the left (west) past a golf course – let’s hope no golf balls fly into the San Francisquito Creek nearby – and then bends to the right (north).  On the right side are the wild marshlands of the Bay.  On the left is a huge fenced area with many electric power towers.

Just before one rides over a wooden bridge into Ravenswood Open Space Preserve, one can turn right and pedal to the end of a short road where a fancy new building marks the location of Cooley Landing Park and Education Center.  A wharf was built here sometime before 1867 to take advantage of the deep water.  Lester Cooley turned the wharf into a transportation hub from the 1860’s through the 1930’s.  Later this area housed the Palo Alto Boat Works until 1998.  This small peninsula is built on land fill – the old County dump.  The Education Center was built by the City of East Palo Alto.  Those brand new restrooms, so enticing, are closed until further notice due to Covid.

There’s a sign by the small wooden bridge that takes you into the Ravenswood part of the Bay Trail, saying they are evaluating whether to allow class 1 and class 2 electric bikes in that area.  Once on that part of the trail, I followed short spurs to the South Observation Platform, where I stopped for lunch on my return trip, and the North Observation area (not quite a platform), which gives a good view of the old railroad bridge that still extends halfway into the Bay, although trains no longer run there.  Beyond that, one can barely see the Dumbarton Bridge arching above the train bridge.

All this while, as I was riding, I wondered if I would be able to get to the Dumbarton Bridge.  One map said a trail gap would be closed in 2020.  I was happy to discover it has been.  A sign indicates which way to University Ave, and there is a newly-paved bike trail that takes you there.  The path continues towards the Dumbarton Bridge and follows along its right side, completely separate from cars, until the bridge begins to rise into its arch above Bay waters.  There is a bike and pedestrian walkway on the bridge that can take you across to the other side (Fremont), but I decided to do that another day.

When I say the path I did ride on is “separate from the cars,” that is a comment about safety, but one still has to breathe car exhaust for several tenths of a mile.

I rode along the side of the bridge until the bike path curved left under it to the other side, providing another way to get back.  I guess it’s one way to get across the bridge traffic and continue north.  I rode under the bridge just far enough to see where the trail went and was surprised to see how close one is to marshes full of pickleweed.  (Have I mentioned that pickleweed is a favorite food of the endangered salt marsh harvest mouse? I got to photograph some of those mice one time during a survey by biologists from the Don Edwards S.F. Bay National Wildlife Refuge.)

There is a small parking area just before the bike path curves under the bridge.  One can park there and then ride over the bridge as one option.

With all the short side trips, my ride from start to the Dumbarton Bridge was 8.3 miles.

There are a lot of entities partnering to create or enhance the Bay Trail experience.  In this section of Map 6, the cities of Palo Alto and East Palo Alto are involved, as well as the Midpeninsula Regional Open Space District.

Next time I’ll ride the Tidelands Loop and Newark Slough Trails – the top portion of Map 7 and the bottom portion of Map 8 – near the Fremont Visitor Center of the Don Edwards Refuge.  I’m curious to see how far Marshland Road, a part of the Bay Trail, goes alongside the Dumbarton Bridge (Highway 84) from the east side.

Note on Camera Equipment:  It helps tremendously to have a circular polarizer on my lens when shooting in the middle of the day.  Midday sun can be flat and dimensionless without polarizer help.  And the polarizer allows you to “dial in” or “out” the reflections on the water, depending on the effect you want.

Note on Bike Racks:  I’m extra careful to make sure the straps of my bike rack don’t loosen once I load my bike.  I pull into a shopping area a few blocks from my house to check and make sure the bike is still secure.  In a careless moment, my mind will wander, wondering if my bike could ever fall off onto the freeway.  And so this morning I got to see what can happen.

Travelling north on 280 about 10 a.m., in light traffic, I noticed a CHP vehicle, lights flashing, merging onto the freeway from an onramp.  The car began zigzagging back and forth across the four lanes to create a traffic break until it brought all of us to a stop.  And we stopped . . .  in front of a bicycle that had fallen off of a vehicle now parked on the right shoulder.  On the officer’s signal, the driver of the vehicle ran into the middle of the second lane (counting from the right) and carried the bike back to the car.  The front wheel was bent in half.  It looked like the car had one of those fancy bike racks, with another bike still on it – the kind that hook into a hitch behind the bumper.  I’ve admired those racks and thought about getting one.  While I have no idea what caused that bicycle to come off the rack, I think I’ll stay with my antique bike rack, now 25 years old, whose maker – Rhode Gear – is no longer in business. 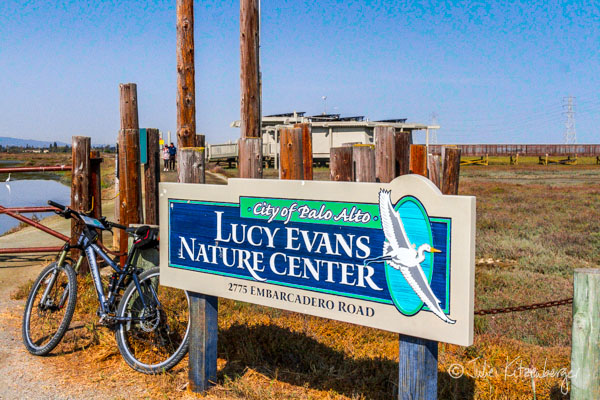 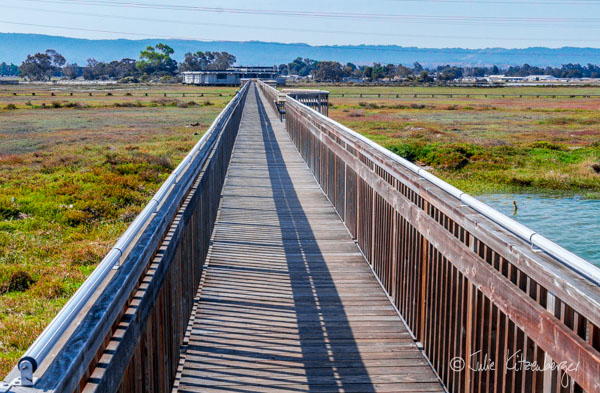 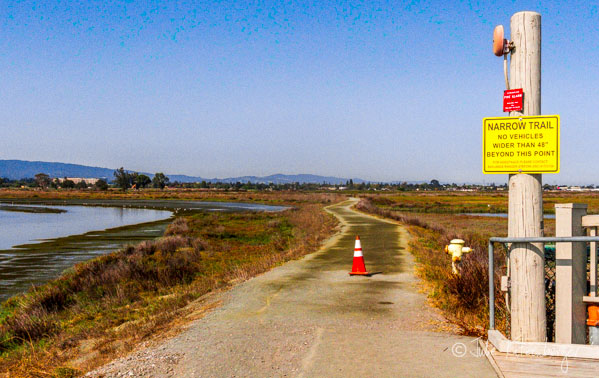 Narrow trail with Duck Pond on the left 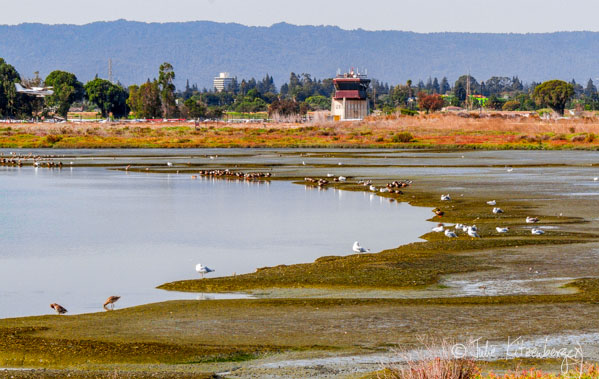 The Duck Pond (next to the Palo Alto airport) 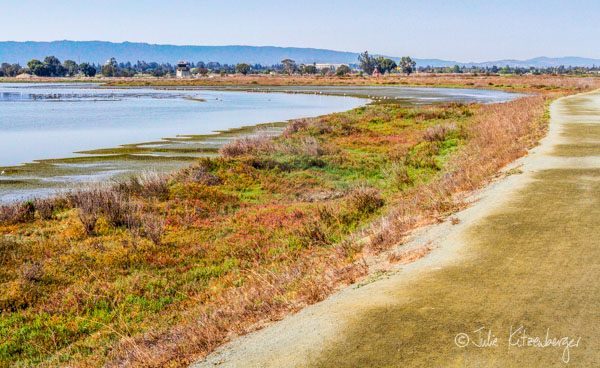 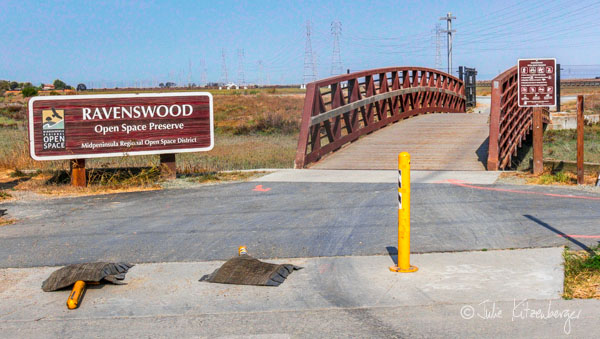 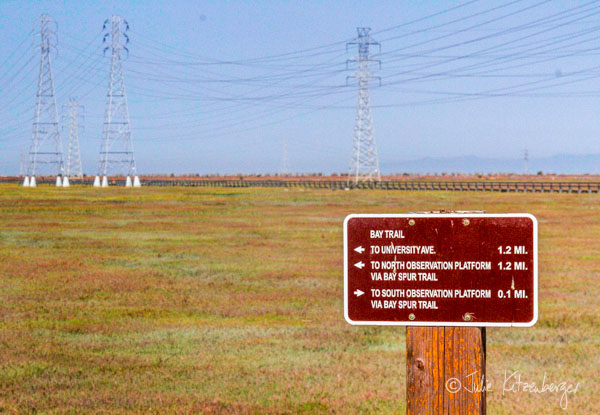 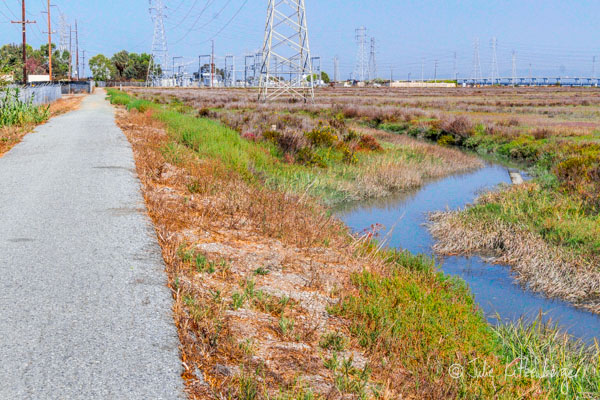 The trail passes a farm of power towers 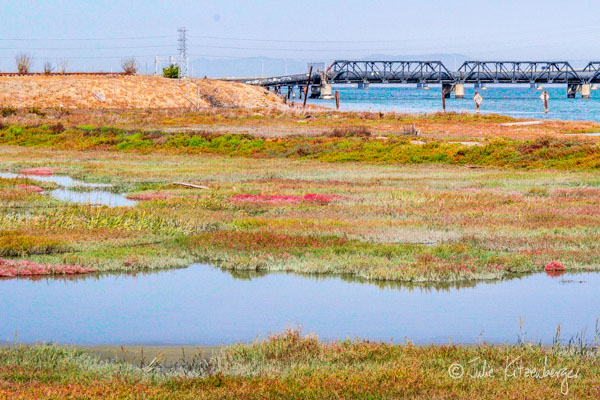 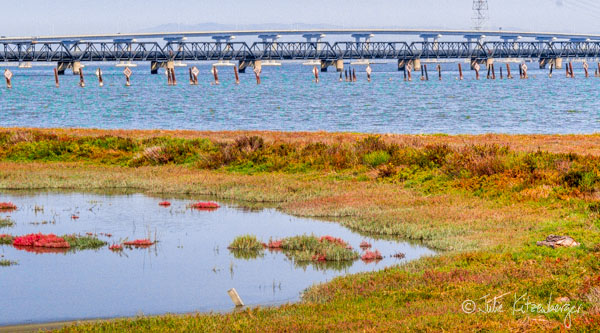 The Dumbarton Bridge can barely be seen, arching above in the distance. 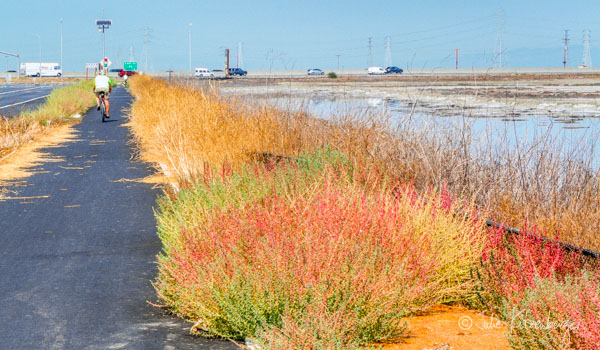 At the stop light, take a right to ride alongside the Dumbarton Bridge 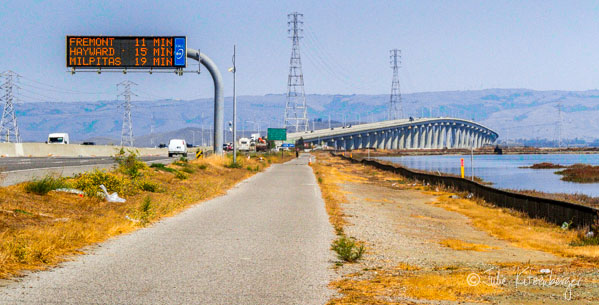 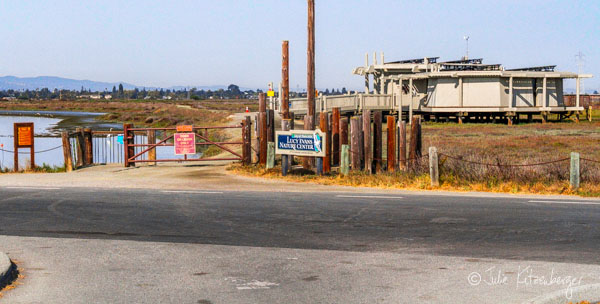 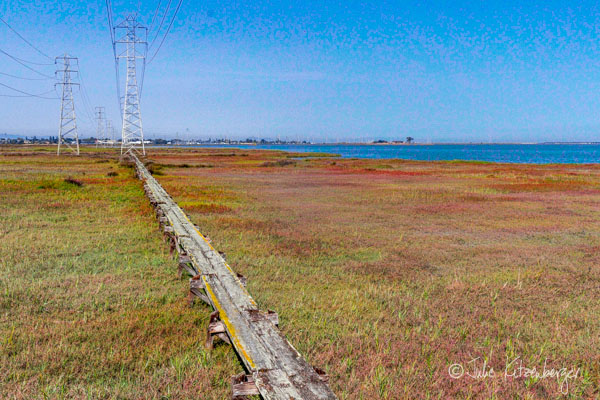 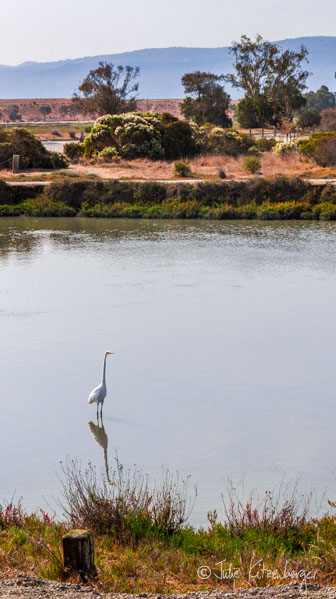 A great egret — still as a statute 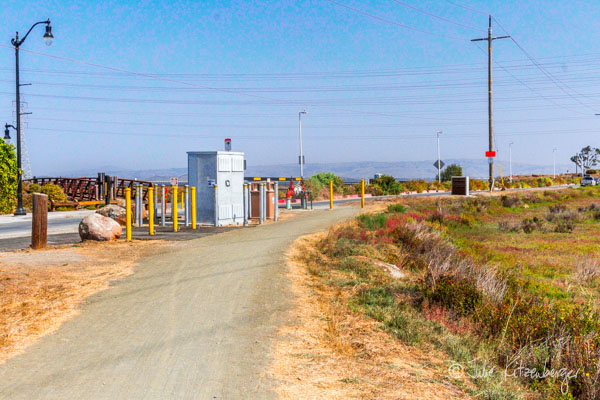 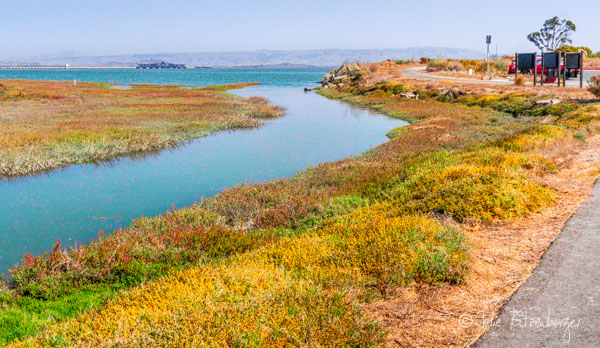 At the South Observation Platform 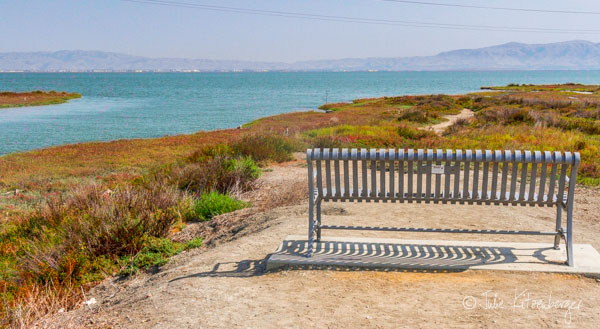 View from the North Observation bench 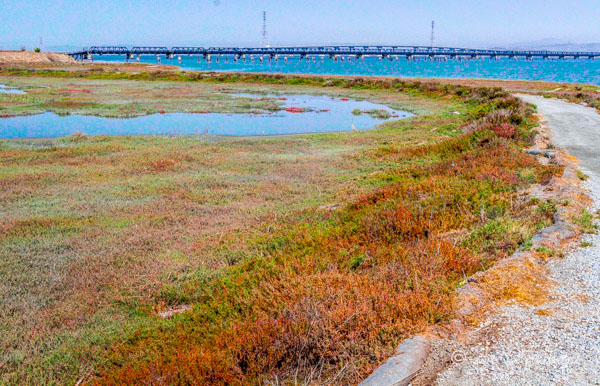 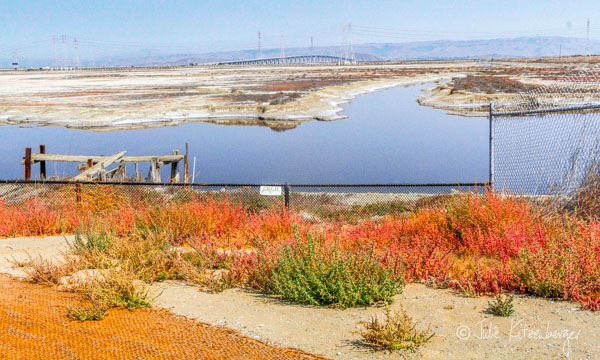 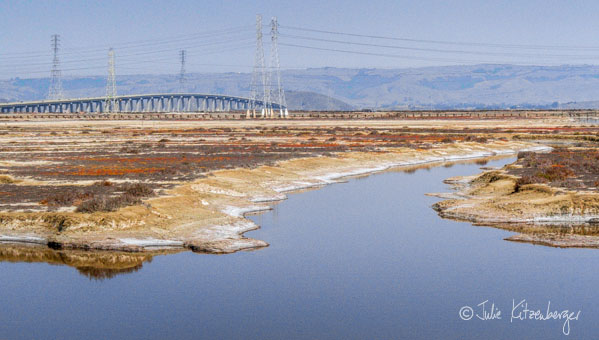 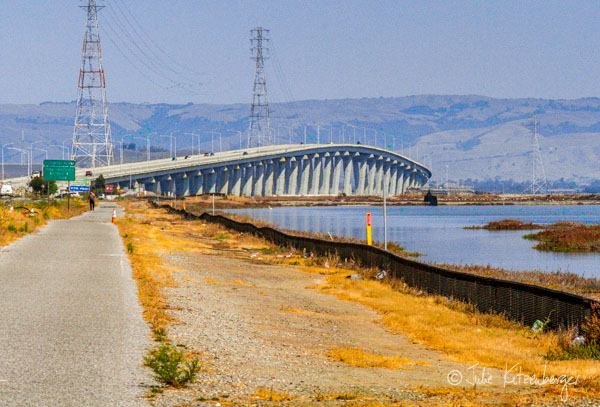 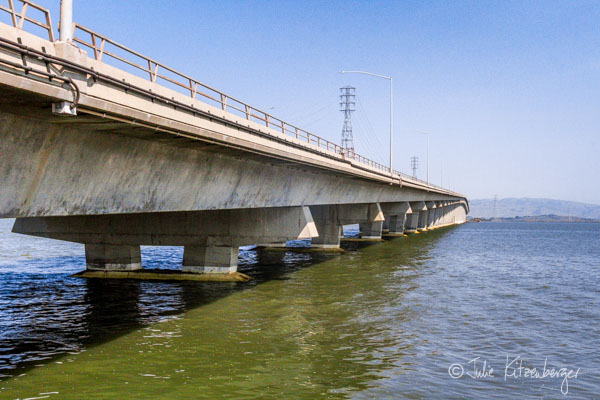 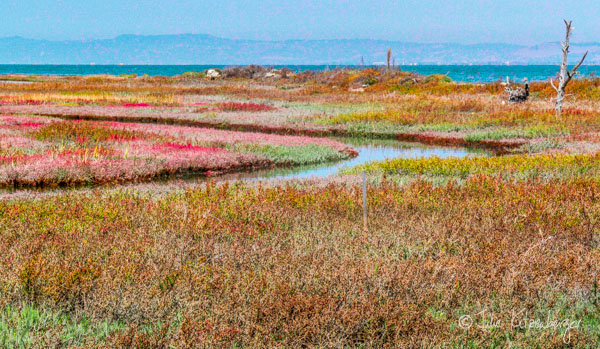 More of the marshlands on the north side of the Dumbarton 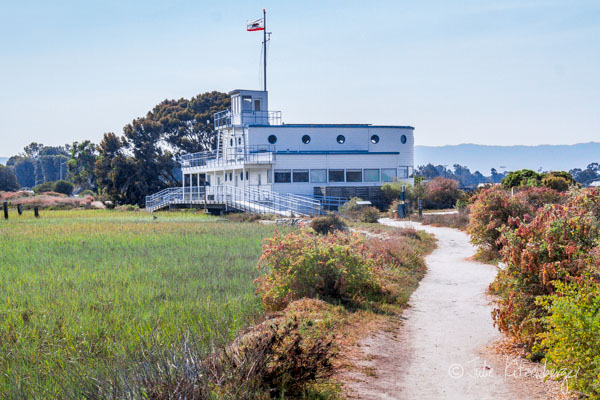 From the last ride:  the Eco Center is just down the road 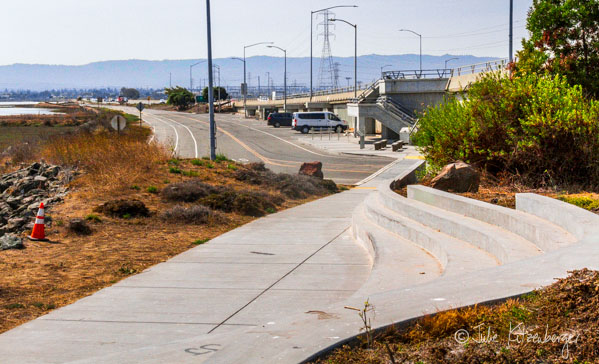 Here you can ride under the bridge

On the return trip:  coming up on the Lucy Evans Center with the Duck Pond on the right 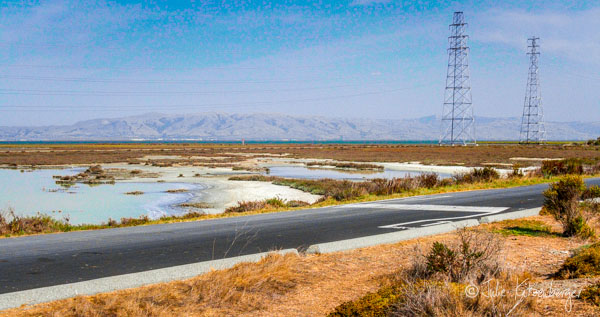 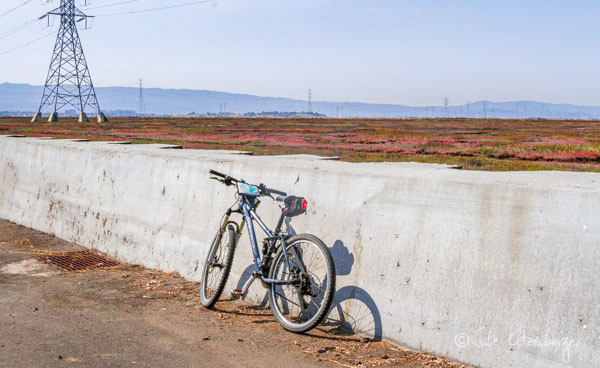 So close to the marshlands on the other side! 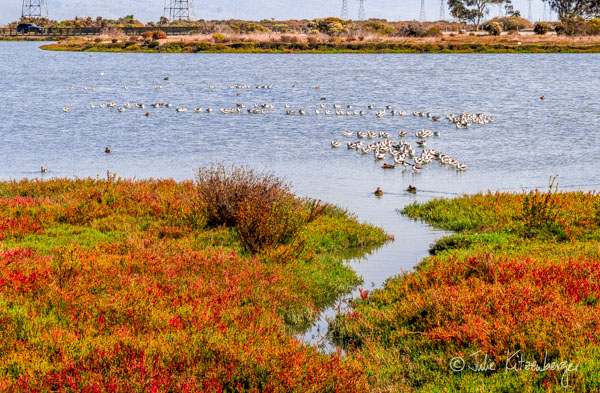 In the Duck Pond:  a flock of stilts 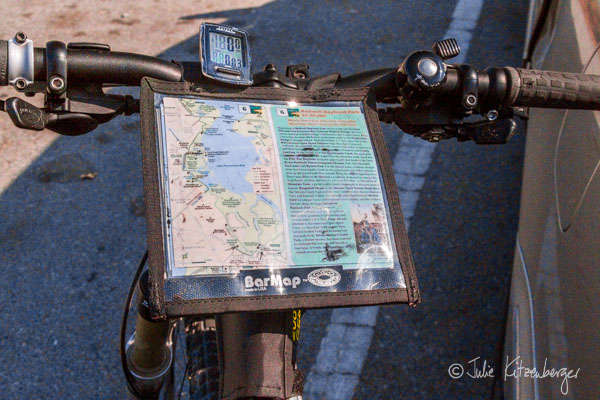 Make yourself a map holder!   (Another antique of mine: Bar Map no longer makes these.)