It was gone.  My Mom walked out her front door, headed for swimming, and there was no 1991 silver Honda Accord in her driveway.

Two other Hondas were stolen that week.  “For their parts,” everyone said.

My Mom was heartbroken.  She loved that car.  Possibly even more than that, she loved the little piece of driftwood she had found, formed and polished by ocean waters into the shape of a seal.  The car’s dashboard was relatively flat, and the little seal had ridden there for over 20 years.

A swimming friend loaned my Mom the use of her VW.  The hope was my Mom’s car might be found.  But weeks passed and no car appeared.  It was time to get a new one.

She went to the nearby used car lot, the Buggy Barn.  Locals parked their cars there to sell.  Purchasers were allowed to test-drive the cars, bringing their mechanics along for advice.  The dealer asked how much my Mom had to spend, and she said $3,000.

I must confess I was more than a little envious.  It was Honda’s flagship model with all the bells and whistles.  “RL” stood for “Refined Luxury”:  heated leather seats; Bose all-around sound; CD player with a 4-disc changer; a large-screen GPS system.  It had a setup that car geeks would  love:  the V6 engine was mounted in-line with the car’s axis, instead of the 90-degree offset of most front-wheel-drives. This smaller turning radius meant it made really tight turns – a perfect city car.  However, I was happy to see my Mom with such a fancy car.  She deserved it.

My Mom asked if I would like to drive it when we went to visit a friend.  Of course, I said.  I could try out the cruise control.

On the way there, she asked me how I liked the feel of the car.  I said it felt fine.

On the way back, she asked me how it compared to my car, a solid white 1994 Crown Victoria police interceptor I had bought from a Government auction.  I said it felt the same – both big, powerful cars.

When we got home, she said she’d like to give me the Acura for my 60th birthday !!!  She confessed the car was too big for her and she had trouble getting it in her driveway.  Plus, she said, she would never use all those bells and whistles and didn’t care about heated seats or a Bose sound system.  The car was meant for me.

Well, my life with my Crown Vic is another story.  Suffice it to say that the former cop car was in its twilight years, and I was wondering how to replace it.  Although it would be an adjustment to part with my beloved interceptor, having this fine Acura solved my problem of what car to get next.

But first, my Mom pointed out, she still needed a vehicle.

She told the folks at the Buggy Barn she was back for another car and her budget was still $3,000.  Once again luck was with her, the dealer said.  He had a black 2001 Honda Civic — a cute little car that would fit her perfectly.

Now both my Mom and I had new cars!  With heavy heart, I relinquished my cop car to the State of California and received $1,000.

A month later, the police called to say they had found my Mom’s stolen Accord.  Residents reported the car parked in the Berkeley hills, covered with a blanket of pine needles from nearby redwoods.  The car was towed to her house.  After a jump, the battery tested fine.  The gas tank was half full, and my Mom found her sun glasses in the glove compartment.  Most important was the fact that there, sitting on her dashboard, was the driftwood seal.

My mom’s former neighbors had moved a few blocks up the street from where her car was found.  “You know,” they told her, “we drove past that car and said, ‘Gee, that looks a lot like Kathy’s.’”  And so it was.

My Mom decided to keep the newer Civic.

With heavy heart, she turned in her Accord to the State and received $1,000.

And then she put the driftwood seal on the mantle in her dining room – just to be safe. 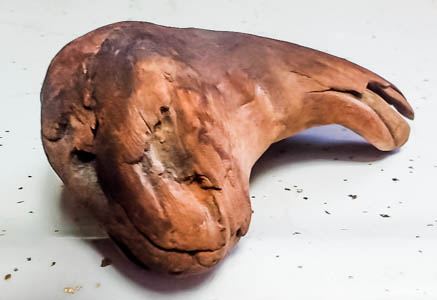 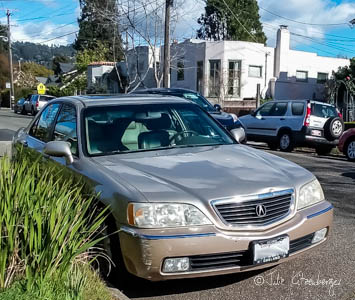 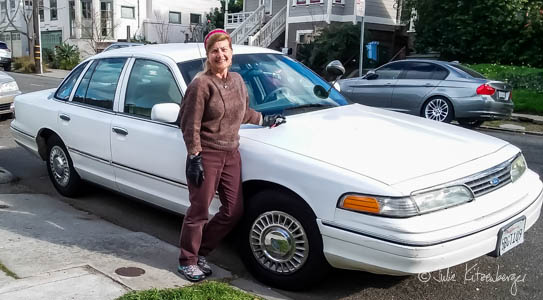 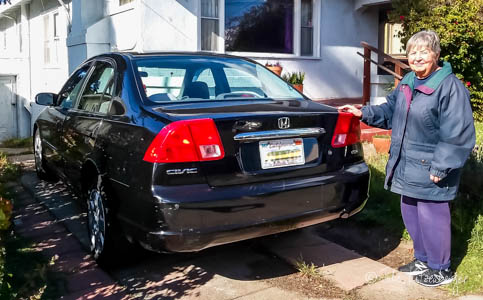 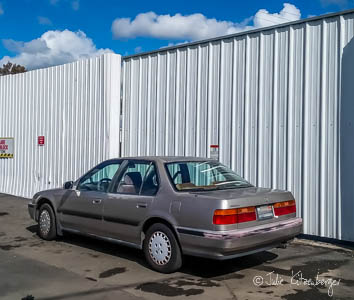 Bidding farewell to Mom’s 1991 silver Accord 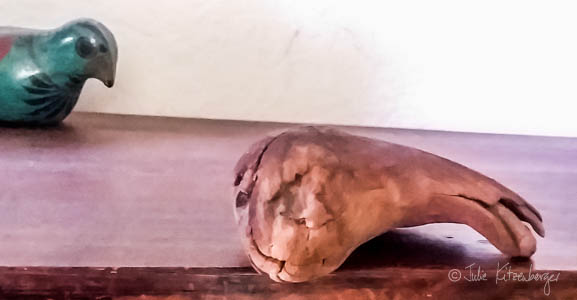 The driftwood seal on the mantle in Mom’s dining room

Mom and me with our new cars