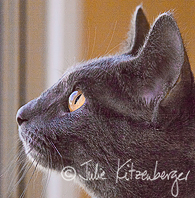 I’d like you to meet Nemo, a former shelter cat!

Nemo is a Russian Blue domestic shorthair cat who was adopted by Marlies and Mark last summer from a local shelter when he was 9 months old.

The household already had one cat, a lovely 8-year-old domestic shorthair with the softest black fur, named Poes (pronounced “poos” — Dutch for “pussycat”).  There was a bit of an adjustment period for Poes, as Nemo is a very bouncy kitty and jumps higher than any cat I’ve ever seen!  Poes is old enough to be much more calm.  But time helps these adjustments, and, with gentle guidance and patience from Marlies and Mark, Poes and Nemo get along well now. 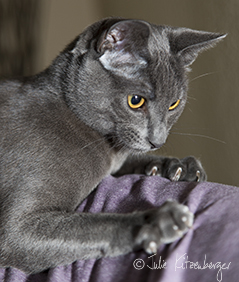 Nemo is a mighty hunter:  he loves to chase the laser and capture his bird toy (feathers that dangle on a string from the end of a fishing rod).  Nemo often carries the bird feathers through the house, jungle-style.

I spent two photo sessions with these kitties.  For one shot, Nemo straddled the top of a chair and posed for me.  I think he looks like a kitty movie star.  He’s such a handsome boy, he could easily be a teen feline heart throb!

Thanks, Nemo, for being Cat of the Month!