Special Friends:  the Cat & the Pigeon 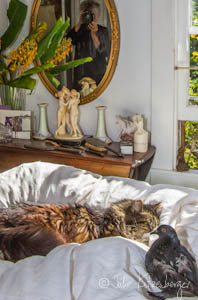 I’d like you to meet Jean-Minou, a former stray who has made a special friend! His is a stray cat success story. He’s a very large, lovable Maine Coon cat who used to roam the neighborhoods until he found the perfect home to move into, with his guardian Janet. Maine Coon cats are known for their intelligence and gentle personalities, and Jean-Minou is no exception. Jean-Minou first noticed Janet’s back yard because she raises pigeons and there was a big wooden pigeon coop in the garden. Once Jean-Minou got to know Janet, she invited him to come inside, where it was especially nice and warm, she served the most delicious food every day, and there was a big soft bed with a feather-soft comforter, in front of a big window that let in plenty of afternoon sunshine every day. Jean-Minou noticed that Janet didn’t leave the back door open for him to go in and out, but things were so nice and comfortable inside that he didn’t mind.

Jean-Minou had been a mighty hunter for a long time and relied on his great skills for many years when he was a stray kitty, roaming the wild outdoors of local neighborhoods. Vets have estimated he is probably 18 years old by now – though Jean-Minou says he’s not sure – which is older than most Maine Coons live. Being an older kitty, he’s slowing down a bit now. These days he lets Janet take care of his meals. He knows he’s a might hunter; he’s got the stories to prove it.

Jean-Minou never told Janet what his name used to be, but he did tell her he was French! (By the way, Jean-Minou has never once mentioned anything about Maine!) When Jean-Minou was just a 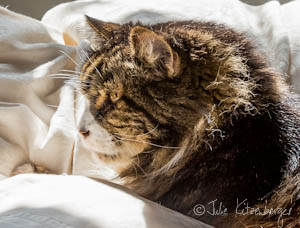 kitten, his kitty-mother used to tell the whole litter cat-tales (no pun intended) about being French. She had explained that long ago – around 1793 – Marie Antoinette had tried to escape from France, loading her prized possessions, including her six beloved cats, onto a ship. Although Marie-Antoinette never left France, her cats safely reached the shores of Maine. There is even a myth going around that Maine Coon cats are part raccoon, but Jean-Minou’s kitty-mother said that was pure nonsense. [Cite]

So Janet decided to give him a French-sounding name, in honor of another wonderful cat she had known, named Jean-Claude. Janet says, “‘Minou’ is the way you call a cat in French. They say ‘minou, minou, minou,’ as we say ‘here, kitty, kitty, kitty.’” Janet knew that cats seem to like U (“mew”) sounds. She says, “In Italian, for instance, they say ‘mishou, mishou, mishou’; in Tegrina, the language of Eritrea, they say ‘dmu, dmu, dmu.’” Since the name Jean-Claude was taken, Janet decided to name her new cat family member Jean-Minou.

One day, after Jean-Minou had settled in and was enjoying his new home, Janet brought home a pigeon, named Ziggy. At first Jean-Minou thought Janet had brought him a live bird to chase and catch

and maybe eat for dinner, but Janet said no. She explained to Jean-Minou that Ziggy was a handicapped pigeon and couldn’t walk! Ziggy could fly, but her legs didn’t work anymore, so it wasn’t safe for her to live outside. Janet gave Jean-Minou a delicious meal with some of his favorite food, made sure he wasn’t hungry anymore, and introduced him to Ziggy. Every day, she fed Jean-Minou tasty treats and then let him meet with Ziggy for a while. She explained that Ziggy was his new sister and was NOT dinner! As we know, Jean-Minou is a very intelligent kitty, and he pondered this quite a while. As time passed, while he was stretching out on his incredibly soft comforter on the big, soft bed in front of the window letting in warm, warm sunshine, Jean-Minou decided that he could get used to this pigeon sleeping on the comforter, too. After all, he was never hungry when Ziggy was around. So, why not?

Jean-Minou is a patient kitty, too, because Ziggy does some annoying things. Ziggy sometimes flies to the edge of the bed and 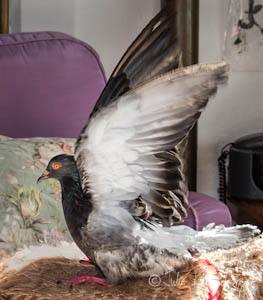 perches there, flapping her wings like crazy as she tries to balance. It startles Jean-Minou out of his catnap or prevents him from dozing off. However, as time has passed, Jean-Minou has become great friends with Ziggy, and they sleep near each other on the soft, soft comforter every day.

One day, Jean-Minou woke up to quite a commotion. Janet was running around the bedroom in a very agitated state. Then she went into the back yard. Jean-Minou could see her through the window. She was running through the back yard, calling Ziggy’s name. It seemed like she was crying. She came running back inside and started making phone calls. It seemed like she was calling every bird sanctuary in the East Bay, telling them that she had a handicapped pigeon who had escaped — who could fly but couldn’t walk – and asking everyone if anyone had found her pigeon.

As days passed and Ziggy didn’t return, Jean-Minou became more and more depressed. Janet says, “When Ziggy was lost . . . Jean-Minou, paralyzed by grief at the loss of his troublesome little sister, retreated to the corner of the living-room sofa, getting up only for

life’s bare necessities. He’d lost his best friend!” He hadn’t realized how much his pigeon friend had come to mean to him. Janet tried to comfort Jean-Minou, but she was very upset, too. Jean-Minou remembered how often he would get annoyed when Ziggy flapped her wings too much, but he also realized he just couldn’t live without Ziggy. Jean-Minou isn’t sure how many days passed, but he was very sad.

Then, miracle of miracle, one of the bird sanctuaries, WildCare [http://www.wildcarebayarea.org/site/PageServer] in San Rafael, called Janet. Someone in another part of the city had noticed a pigeon flopping around on the sidewalk in a very strange way. They had decided to call the bird sanctuary, who knew immediately it must be Ziggy. Ziggy was reunited with Janet and Jean-Minou once again.

“Jean-Minou was one happy kitty when Ziggy returned!” Janet says. In fact, Jean-Minou is so happy to have Ziggy back, he can’t stop purring. And he is so glad his guardian, Janet, taught him long ago that Ziggy was not his dinner but a friend! 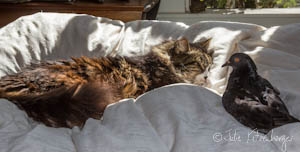 Jean-Minou is a stray cat success story. He knows he’s found the very best home a kitty could.

Thanks, Jean-Minou, for being our CATsnaps August 2013 Cat of the Month!