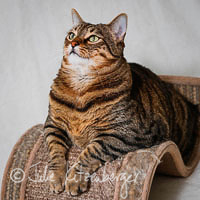 I’d like you to meet Velcro, a former shelter cat!

Velcro is a very handsome tiger cat with a purrfectly wonderful personality. Thanks to his guardians, Teresa and Will, Velcro was adopted into a wonderful forever home just in the nick of time, when he was 3 months old. He was a teensy tiny kitten and cute as could be! Time passes quickly when a cat is having fun, and Velcro is 4 years old now! He is so happy that, back at the shelter, he was allowed to bring his special shelter friend, Ginger — a small orange tabby — to his new home with him. In fact, although Velcro is a nice big cat now, he lets his smaller friend, Ginger, rule the roost. 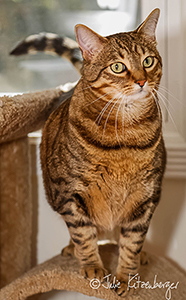 When you meet Velcro, he sometimes seems a little shy. However, once we set things up to capture his portrait, he couldn’t resist showing off, sitting on his favorite S-shaped scratching seat and looking up. Sometimes he would reach one paw far out in front of him to snag his favorite ball, but he never got off of his perch. He must have posed for 30 minutes !!

Velcro’s favorite relaxation spot is lying on his cat tree by the back window where the sunlight shines in and he can look out and watch those wily birds.

Velcro is a mighty hunter, and 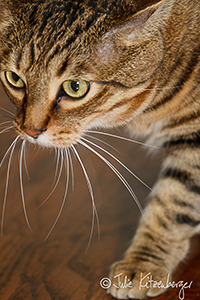 we were fortunate to capture a shot of him stalking an imaginary bird through the house.

Velcro is a shelter cat success story. He knows he’s found the very best home a kitty could.

Thanks, Velcro, for being a featured kitty on the CATsnaps website and our July 2013 Cat of the Month